11 p.m. A Montreal, Maine & Atlantic Railway train pulls into Nantes, Que., according to the Transportation Safety Board. It is heading east and made up of 72 carloads of crude oil and five locomotive units, according to MMA. The tank car model, called DOT-111A in the United States and CTC-111A in Canada, has been criticized because it is prone to puncturing, even in low-speed collisions. Models 111A are generic tankers that could be used for any liquid, for example corn oil, TSB manager Ed Belkaloul said, noting that it is not double-hulled or reinforced with shields. The tank is just one centimetre thick.

11:25 p.m. The engineer, Tom Harding, secures the train. Mr. Harding puts the handbrakes on five locomotives and on 10 freight cars, and left one engine running, on the main locomotive at the front, according to MMA director Yves Bourdon. Mr. Harding leaves the train for the night and goes to a hotel in Lac-Mégantic, about 10 kilometres southeast. The hotel is L'Eau Berge, 3550, Boul. Stearns, which is two blocks – less than 500 metres – from the blast site. The train is on the main track.

11:30 p .m. A citizen calls 911 after seeing a fire on the train. Nantes firefighters call an MMA dispatcher in Farnham, Que., who asks a track-repair worker to go to the scene, Mr. Bourdon said. Danielle Veilleux, who lives directly across the street from the train tracks in Nantes, looked out her window and sees sparks coming from the chimney of the train's locomotive, and a large, noxious cloud.

11:50 p.m. An MMA employee arrives, according to the TSB. Mr. Bourdon said the employee was a track repair worker who is not familiar with how locomotives work and would not have known how to start the engine if it had been shut off.

Midnight: The train's engine is shut down and the fire is extinguished. The fire fighters and the MMA employee leave some time after. The track worker phoned the dispatcher before leaving, "and then he went home," Mr. Bourdon says.

1:14 a.m. The train enters Lac-Mégantic. In its latest briefing on Tuesday, the TSB would not give the exact speed, but earlier, investigator Donald Ross said it was travelling at 101 kilometres an hour when it reached the final straightaway into town.

Just before the train hit the city centre: Alex-Catherine Gagnon is getting gas on her way home from work when she sees the train throttle by. "That's really dangerous – imagine the damage it could cause," she tells a friend.

At the Musi-Café: The popular hangout is packed with revellers celebrating birthdays and listening to a live music duo. Bernard Théberge steps out onto the patio to have a cigarette. He hears the train coming.

At the curve, near the Musi-Café: The tank cars jump the rails as the train turns well over its authorized speed. Nearby, Ms. Gagnon sees a "huge ray of light" in the sky.

On the Musi-Café terrace: Mr. Théberge sees a wall of fire go up, grabs his bike from the patio railing and starts pedalling. "Smoking saved my life," he later realizes. Even though they live 300 metres from the scene, Vincent Roy, his wife, their three children and Mr. Roy's father have to flee in little more than their underwear as a mushroom cloud towers overhead and debris rains down.

After the tank cars derail into a jumble: The five locomotives at the front detach from the rest of the train and continue through the town centre, stopping on the southwest side.

At the L'Eau Berge hotel: The blast wakes up Mr. Harding. He gets dressed, goes to the accident scene and borrows a railcar mover parked at an industrial rail spur nearby, Mr. Bourdon said. With the blessing of the firefighters, Mr. Harding approaches nine cars at the tail end of the train that have not derailed. He unhooks them and pulls them away.

With reports from Kim Mackrael, Justin Giovannetti and Sean Silcoff in Lac-Mégantic, and Ivan Semeniuk and Cynthia McQueen 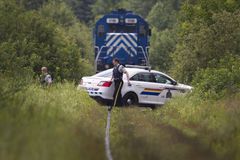 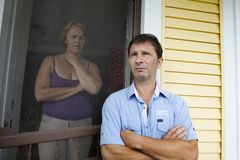 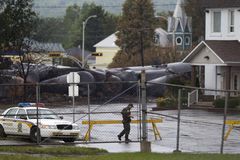 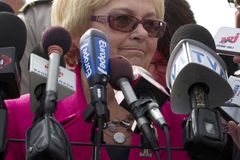