The biggest and most complex hospital move in Canadian history went off without any significant side effects for patients, say organizers, as more than 150 of them were transported one at a time from the landmark Royal Victoria Hospital to a new superhospital in the city's west end.

Staff at the new, high-tech McGill University Health Centre also celebrated the first birth at the facility – on Sunday at precisely 6:55 a.m.: a 3.6-kilogram boy.

After years of preparation and rehearsals, about 2,500 staffers orchestrated the transfer of 154 patients – 139 adults, 15 babies – some from the Royal Vic's intensive care unit, by ambulance or medical bus at three-minute intervals in light traffic on a brisk spring day. It was a 6.3-kilometre trip.

The first patient to be transferred was a baby in neonatal intensive care, officials said.

The big move was completed hours before the scheduled 3 p.m. deadline and involved far fewer than the 220 to 250 individuals who could have been involved thanks to support from sister hospitals and the discharge of some non-critical patients, MUHC spokesman Richard Fahey said.

"We are pleased to finish ahead of time the most complex transfer in Canada," he said.

"It was just incredibly smooth. There was a lot of rehearsals, a lot of practice. It just worked," intensive-care unit physician Sheldon Magder said.

"There are a lot of pieces that have to come along with [the critical-care patients]," such as respirators and heart monitors, he added.

Both the old and the new hospitals were kept functioning during the one-day migration, which began at 7 a.m. and cost an estimated $10-million. The Royal Vic stopped accepting emergency room cases at 5 a.m., in sync with the start of ER operations at the MUHC.

Activities at the Royal Vic were gradually ramped down during the week.

The movement of more patients to the sprawling, five-city-block-long superhospital – known as the Glen site, in Notre-Dame-de-Grâce – is planned in the coming weeks, including those in the Montreal Children's Hospital and the Chest Institute and cancer patients from Montreal General Hospital.

The $1.3-billion MUHC project was plagued by allegations of corruption in the bidding process involving the president – Dr. Arthur Porter – and other individuals, including the then-chief executive of engineering giant SNC-Lavalin Group Inc.

"This is not just a geographical change in health care. We never had a truly integrated system."

The fate of the 122-year-old Royal Victoria – "the Vic" to locals – is up in the air. One proposal is to transform the Scottish-baronial-style edifice on the southern flank of Mount Royal into condominiums. But there is citizen pressure to keep its use public, and nearby McGill University has expressed interest in the site.

"It's part of our heritage," 17-year-old Elodie Perron-Glennie said on a farewell visit to the now-shuttered hospital.

"Just think of all the hours worked there, all the lives saved," said Ms. Perron-Glennie, whose maternal grandfather was once an anesthetist on staff and whose brother Cédric, 11, was born there.

"It's a shame," her father, Donald Perron, said. But a move out of the aging, labyrinthine premises was no doubt overdue, he added.

It was at the Royal Vic that Canada's first kidney transplant was done, in 1958, and the hospital is internationally recognized for its transplant expertise. The Royal Vic also established Canada's second hospice palliative-care unit, a few weeks after Winnipeg's St. Boniface Hospital, in 1974. 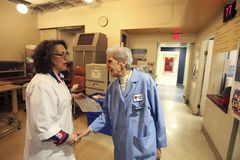 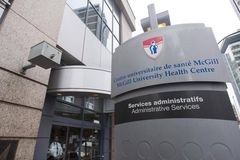 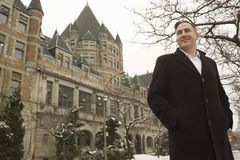