When the runaway ghost train rolled into the heart of town and detonated like a bomb, levelling the entire historic central district of pretty Lac-Mégantic, Que., survivors say that life or death depended on where you happened to be standing.

A day after the conflagration which destroyed at least 30 buildings, including a packed bar, apartments and all the town's archives, fire still raged. With one confirmed dead, hope was diminishing for dozens of people who remained missing.  Medical officials reported almost no injuries. Those who failed to escape probably did not survive to seek treatment.

Many of those missing were indoors, such as the patrons of the Musi-Café bar who filled the building when 73 driverless train cars rolled in out of control at 1:15 a.m. ET Saturday morning.

Those who were outside when the train failed to negotiate a bend had a chance. Some survivors were out for a smoke. Some were going home after a enjoying a few drinks at a packed bar near the epicentre of the explosion. Others out for a stroll ended up running just a metre or two ahead of a river of fire – tons of burning crude oil flowing down city streets and into the lake.

So far, the Surêté du Québec is confirming only one death and refusing to validate reports that anywhere between 50 and 80 people are missing. An officer speaking on condition of anonymity Saturday afternoon told a Globe and Mail reporter he had 50 names on his list. Agence France-Presse put the number at 80.

In the final police briefing for Saturday, Lieutenant Guy Lapointe would say only: "There is one confirmed death. But we expect others."

Those who were on the scene when the immense fireball turned buildings into piles of ash have no doubt the death toll will be big.

" Everybody who didn't make it back is dead," predicted Frédérique Mailloux, a 38-year-old stay-at-home mom, who said six of her friends are missing. "I have cried every tear in my body."

Nearly two square kilometres of the downtown were razed, according to Fire Chief Denis Lauzon. "The scene is like one you see after a big forest fire. There are only parts of the buildings left, trees have been completely burnt, there is no grass left, the cars are charred. This is total destruction."

Earlier, provincial police Lt. Michel Brunet told a news conference: "Our investigators are trying to track down family members, so we can't give the identity of this (dead) person, but at this time we can confirm one person has died."

Mr. Brunet said authorities have been told "many" people have been reported missing.

"We're told some people are missing but they may just be out of town or on vacation," Mr. Brunet said.

"We're checking all that, so I can't tell you at the moment whether there are any victims or people who are injured."

Relatives in the tourist town of 6,000 full-time residents were already starting to grieve. At a community centre, Jacques Bolduc and Solange Gaudreault emerged after providing a DNA sample to potentially identify their son, Guy Bolduc, a 23-year-old singer who was performing at the bar.

Bernard Théberge, 44, a cook who lives on the outskirts of Lac-Mégantic, was out with his friends at the Musi-Café, one of the most popular hangouts in town and the last known whereabouts of many of the missing. The Musi-Café is a few metres from where the tracks cross Frontenac Street, Lac-Mégantic's main street.

Mr. Théberge was on the outside patio in front of the café smoking a cigarette when the derailment happened. He heard the train coming and knew right away that something was wrong.

"It was going way too fast," said Mr. Théberge. "I saw a wall of fire go up. People got up on the outside patio. I grabbed my bike, which was just on the railing of the terrasse. I started pedaling and then I stopped and turned around. I saw that there were all those people inside and I knew right away that it would be impossible for them to get out.

Mr. Théberge said he tried to go around front to help people escape "but there was just fire everywhere."

"I just pedaled away, but I know a lot of people didn't make it out. There were maybe 60 people inside. "This is a first. Smoking saved my life," he said with a voice raspy from the heat and smoke. His right arm was bandaged for the second-degree burns.

At a tent at the corner of Frontenac and Lemieux streets in the afternoon, paramedics sat idly in the torrid heat with no one to help. Residents gathered to await news of survivors, which never came.

Bernard Demers, who owns a restaurant in the town of 6,000, described the explosion as "an atomic bomb."

Charles Coue said he and his wife "felt the heat" from the explosion, which went off a couple of hundred metres from their home. The couple sprinted from their house in a panic.

With more than 2,000 local residents evacuated, Facebook pages are filled with messages from family members desperately looking for loved ones. Many of those still missing are young men and women who were out enjoying the nightlife on a warm summer night.

The centre of the town lies at the bottom of a hill. The train's owner, the Montreal Maine & Atlantic Railway, has confirmed the train stopped Friday night at a siding near Nantes, 12 kilometres to the west of Lac-Mégantic, for a routine shift change.

Mr. Lauzon, the fire chief, confirmed late Saturday that fire crews had been called to the train because of a fire that had broken out on board a locomotive. It's unclear what role the fire may have played in the crash.

The train's brakes and safety system were functional when the conductor left, according to company spokesman Christophe Journet. The conductor inspected the train and its load before leaving for a local hotel. A replacement crew was slated to come later during the night. Sometime before 1 a.m. ET, the train's load of 73 cars broke loose and began rolling downhill towards the small town. Before it reached Lac-Mégantic, the locomotive also broke free.

"Why the train's brakes stopped working, why it was left alone, we don't know," said Mr. Journet. Several witnesses said the train was racing when it arrived in town.

Volunteer firefighters kept up a constant stream of lake water to cool freight cars into early Sunday morning to prevent further explosions. The town's water supply was strained by a cracked water main located too close to the disaster zone to repair. Mayor Colette Roy-Laroche asked residents to use water sparingly.

Five of the cars loaded with crude oil were still considered at risk. More than 2,000 people were evacuated as Quebec's environment ministry has warned of toxic chemicals in the air.

Expressions of  support poured in to the city, which were welcomed by the shaken mayor, Ms. Roy-Laroche.  "As mayor, when you see the majority of your downtown destroyed like that, you'll understand we're asking how we're going to survive it," she said. "But we're getting very strong backing. It's appreciated."

Ms. Roy-Laroche noted she did not hear from train company executives.

Christian Paradis, a federal cabinet minister and the local MP, had lunch at the Musi-Café on Friday as he was touring his riding. "This is a huge hit for the city. We are going to need to pull together, roll up our sleeves and rebuild," he said.

Mr. Paradis is from the nearby Eastern Townships town of Thetford. He came back early Saturday and met people who were crying for lost relatives. "People are just trying to understand what happened."

Mr. Harper, who is planning to visit the Quebec community Sunday,  called the disaster "shocking and truly devastating" during a news conference in Calgary Saturday. Earlier, the Prime Minister said in a statement that the "people of Lac-Mégantic and surrounding areas can rest assured that our government is monitoring the situation and we stand by ready to provide any assistance requested by the province."

Liberal Leader Justin Trudeau added: "My thoughts are with all the families who have had to be evacuated, and especially with all those who are searching for their loved ones."

In addition to the explosions and fire, a large but undetermined amount of fuel also reportedly spilled into the Chaudiere River, said Environment Quebec spokesman Christian Blanchette.

"Right now, there is big smoke in the air, so we have a mobile laboratory here to monitor the quality of the air," Mr. Blanchette said in an interview.

"We also have a spill on the lake and the river that is concerning us. We have advised the local municipalities downstream to be careful if they take their water from the Chaudiere River."

Lac-Mégantic is part of Quebec's picturesque Eastern Townships region, close to the border with Maine and Vermont.

Several neighbouring municipalities, including Sherbrooke and Saint-Georges-de-Beauce, were enlisted to help Lac-Mégantic deal with the disaster.

Emergency services south of the border were also lending a hand.

A fleet of fire trucks were deployed from northern Maine, according to a spokesman at the sheriff's office in Franklin County.

-With files from the Canadian Press CP Rail CEO on bridge collapse and reaching out to Nenshi
June 27, 2013 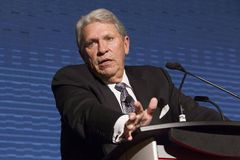 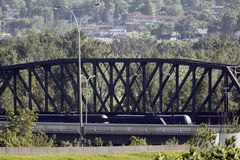 Follow Sophie Cousineau, Justin Giovannetti and Les Perreaux on Twitter @S_Cousineau @justincgio @Perreaux
Report an error Editorial code of conduct
Due to technical reasons, we have temporarily removed commenting from our articles. We hope to have this fixed soon. Thank you for your patience. If you are looking to give feedback on our new site, please send it along to feedback@globeandmail.com. If you want to write a letter to the editor, please forward to letters@globeandmail.com.
Comments