When humans were first crossing the Bering land bridge and pushing into the New World, the elephantine beast known as the American mastodon was already long gone from the region.

That is the key result of a detailed a re-analysis of bones from 36 mastodon specimens found in Alaska and the Yukon that was published on Monday in the Proceedings of the National Academy of Sciences.

The results address a long-standing puzzle in North American paleontology: Mastodons are so named because of their distinctly pointed teeth, which are ideal for stripping forest vegetation, but radiocarbon dates associated with some fossils suggest that they were present in the High Arctic near the end of the last ice age, around the time humans were arriving. At that time, the region was an open grassland, forming a corridor between massive continental ice sheets – not at all the kind of habitat where mastodons might be expected to have turned up.

In contrast, the woolly mammoth, a well-established resident of the ancient Arctic, had flat teeth that were well adapted for grazing.

The re-analysis using new and improved carbon-dating techniques solves this puzzle by placing the Arctic mastodon specimens in a fairly narrow range of time, around 125,000 years ago – a temporary mild period in the Arctic known as the Last Interglacial Warming.

"It's like mastodons decided to come north on a vacation when climates were warm, but got chased back down south when frigid ice age conditions returned," said Grant Zazula, a paleontologist with the territorial government of Yukon and the lead author on the study.

Dr. Zazula added that the result means humans did not wipe out mastodons in the Arctic, although human hunters may still have had a significant impact on the massive creatures in their final redoubt, believed to have been somewhere around the Great Lakes region about 10,000 years ago.

"This is all telling us that not all the megafauna in North America were wiped out in an instant due to one single cause. Rather, there were regional die-offs, in places like the Beringia, long before the final extinction occurred in other parts of the continent," he said.

The reason for the earlier confusion over when mastodons lived in the Arctic probably comes down to contamination of specimens with traces of more recent material that can throw off radiocarbon dating, said Richard Harington of the Canadian Museum of Nature, a co-author on the study.

Dr. Harington has worked for decades unearthing mastodon bones across the Canadian North and says he was often perplexed by some of the dates that turned up in connection with his finds. In one instance, 15 years ago, he returned to Great Bear Lake where a mastodon tooth was found in what seemed to be a fairly recent deposit. After close examination, he determined that the tooth had probably been pushed up from an older, deeper layer of interglacial sediment.

He said the results of the new findings are not so much a surprise as a relief. "In my opinion, it's sort of a refinement of the evidence to the point where it starts making paleo-environmental sense," he said.

Editor's note: Richard Harington is a researcher at the Canadian Museum of Nature. An earlier version of this story misspelled his surname. 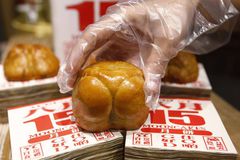