The mayor of the southern Alberta city of Brooks says the community is in turmoil as it prepares for the human cost of troubles at the XL Foods beef plant.

Workers at the plant, which is at the centre of an extensive beef recall and E. coli scare, were laid off again Wednesday as food safety officials prepared to review whether the meat packer can reopen.

"We're in crisis mode," Mayor Martin Shields said Wednesday in an interview with The Canadian Press.

"There are so many of those people who have come to our country," Shields said. "They've made a life for themselves. There's lots of local people who work there, too."

Mr. Shields said it will become increasingly difficult for the 2,200 workers to pay for rent, mortgages and the necessities of life once they miss a paycheque.

"There's desperation in their eyes and they're looking to me to help resolve this thing and I can't resolve it."

The 2,200 XL workers were laid off last week. About 800 were recalled to work temporarily Tuesday to finish processing beef carcasses as part of a Canadian Food Inspection Agency assessment of the plant.

"The workers completed the job. They are now laid off again. We are waiting on the CFIA to decide when the plant can reopen," said Doug O'Halloran, president of the United Food and Commercial Workers union.

"I think the earliest we are looking at now is Friday or maybe Monday."

The agency said it expected to complete a report and make a recommendation to the federal government about the plant before the beginning of next week.

Mr. Shields, who last week dismissed suggestions that the plant could close permanently, is now worried that will happen.

"I'm absolutely worried that the plant closes and will be gone but I'm more concerned about the people," he said.

"If it closes, there's other challenges that we will have to meet and we will meet those. It's a resilient community and we have some strong economic factors in our area, but the people suffer in between and that's tough."

The CFIA said its review in the coming days will include how well the XL Foods is handling E. coli controls, meat hygiene, sampling techniques and overall sanitation.

The agency said it will also analyze the results of tests done on the meat by XL Foods and CFIA inspectors.

"Based on these observations and test results, the CFIA will prepare a report of its assessment and make a recommendation on next steps," the agency said in a release.

The CFIA does not spell out what those next steps could be or how soon the plant might be able to resume slaughtering cattle or sending beef products to market.

On Tuesday night, the food agency announced yet another recall of beef from the plant, this time involving brands sold under different product names in British Columbia and Alberta. The recall of more than 1,800 products now involves 33 retail chains across Canada.

XL Foods officials could not be reached for comment.

The plant has been idle since Sept. 27. The meat packer, the second-largest in Canada, has not been allowed to export beef products into the United States since Sept. 13.

Fifteen people in four provinces have become ill from a strain of E. coli linked to the XL plant.

The City of Brooks is preparing for fallout from a prolonged layoff, but Mr. Shields cautioned it might not be able to cope.

"If this continues a month or two months down the road, that's when we're saying this is way beyond what we can deal with in a monetary sense."

The city, along with social agencies, government and community groups, has been helping affected workers fill out EI claims which Mr. Shields said will be fast-tracked. The community is also bolstering necessary services such as the food bank.

"We've got a whole process that we need to get done for 2,000-plus employees as quickly as possible."

There were more than a 100 requests for hampers from the food bank on Tuesday alone, Shields said.

The union plans to hold a news conference later this week about the need to bolster food safety at meat plants, Mr. O'Halloran said.

XL Foods could learn some lessons from the Cargill beef operation down the highway in High River, Alta., the union leader added.

"I think that the management at Cargill are more able to deal with all situations and they are more qualified to do the job," he said.

Since the XL Foods plant shut down, the Cargill facility has added a Saturday shift and has been operating six days a week. 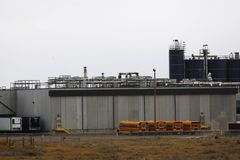 new
Inspections at E. coli-affected plant grind to a halt with layoffs
October 14, 2012 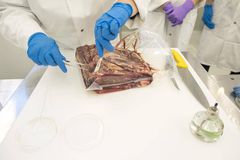