Quebec City's mayor says right-wing protesters are not welcome in his city but he believes they won the popularity contest during duelling demonstrations over the weekend.

Mayor Regis Labeaume thanked members of the right-wing group, La Meute, for collaborating with police while some counter-protesters turned violent.

"Their world doesn't interest us," he told reporters a day after members of the group marched to denounce what they say is a too-charitable refugee and immigration policy by the federal and Quebec governments.

"They say they are non-violent. Let them tell us who they are, what they want, and take away all ambiguity from their message. Why do they have to look like a private militia?"

It was counter-protesters, however, who received the most attention from authorities Sunday, with Quebec City police spokesman David Poitras saying they assaulted officers and caused vandalism.

Police arrested only one person Sunday before releasing him without charge, but Poitras said other arrests are in the offing.

"We have video," he said. "We have images and photos and police testimony. There is an investigation ongoing. It was an illegal protest and there is a strong possibility people will be arrested and charged."

La Meute, which describes itself as a "citizen movement against radical Islam," was supposed to march through the streets Sunday afternoon but its members were confined to an underground garage for hours after the counter-protesters blocked their exit.

Hours later, after authorities dispersed the counter-protesters, members of La Meute marched through the streets with a police escort.

Pablo Roy-Rojas, a spokesman for the people who showed up to protest racism, said the masked people who assaulted police and caused vandalism were not part of his group.

"They didn't participate in our march," Roy-Rojas said in an interview. "It's unfortunate all the cameras and journalists turned toward them. We would have appreciated more coverage; hundreds of us were there saying no to racism."

Sunday's rallies were largely in reaction to the unprecedented number of people walking across the U.S. border into Canada and seeking asylum.

Members of La Meute were protesting the federal and provincial government's handling of the border crossers, who are being housed in buildings across the Montreal area as their cases are analysed.

There isn't much detail about the motives and philosophy of La Meute on its website.

The group states it wants to protect Quebec's "values, rights, liberties, security" and is against "radical Islam."

At least one of its members travelled to Charlottesville, Va., to attend a white supremacist rally that turned deadly on Aug. 12.

A spokesman for La Meute has said that person's membership in the group is suspended due to his participation in the event, pending an investigation.

Labeaume said, "La Meute didn't cause violence (on Sunday) but what was their friend doing in Charlottesville?"

Despite his reservations, Labeaume "thanked" the group for "collaborating with police" and added the group "won the popularity contest on Sunday."

Premier Philippe Couillard said Monday "there is no equivalency" between members of La Meute and those who opposed them Sunday.

"We are not putting on the same moral plateau xenophobia and racism and those who oppose it," he said. "But violence from either extreme is not acceptable." 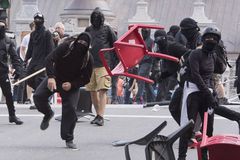 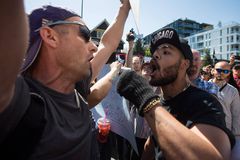 Montreal at odds with province over legislation to ban face coverings for public services
August 18, 2017 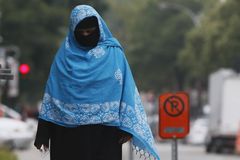