The race to eradicate poverty has moved to the forefront of issues confronting Alberta's cities, large and small. The provincial capital has End Poverty Edmonton, a 10-year plan to address the more than 100,000 people living in poverty. In Calgary, Enough For All: The Calgary Poverty Reduction Initiative is working to help the more than 114,000 people who live below the poverty line.

Now, Medicine Hat has joined the fight. On Wednesday, its Poverty Reduction Leadership Group unveiled Thrive, its own proposal to assist the one in 10 residents dealing with poverty – defined as someone who earns "less than what they need to meet the necessities of life."

But what makes Medicine Hat so uniquely qualified to end poverty is its reputation as a place where things get done.

Two years ago, it became the first Canadian city to solve homelessness. It succeeded by taking 1,072 people, including 312 children, off the streets and providing them with a place to live, be it a house, an apartment, basement suite, trailer, townhouse or condo. The rent was set at 30 per cent of a person's income, and pride of ownership has helped keep homelessness from making a significant comeback.

Medicine Hat has been so vigilant at monitoring homelessness, it has attracted the interest of city officials from Victoria, B.C. to St. John's, Nfld., to Texas, Washington State and the United Kingdom. The program was so successful it became the springboard for ridding an even bigger problem.

"When we announced a functional end to homelessness, the next step was logically poverty reduction," said Medicine Hat Councillor Celina Symmonds, who was involved in the homelessness project as a member of the Community Housing Society. "It is a very co-ordinated effort [taking on poverty], but this community does pull together. I like to call it the little community that can."

Emanuel Akech, 44, can attest to that. He arrived alone in Medicine Hat in 2008, after leaving his war-torn homeland of Sudan and spending 14 years in Cuba, before eventually becoming a Canadian citizen. When he reached Medicine Hat, he had only a backpack with him.

Community Housing put him in a place for the night, got him into the Canadian Mental Health Association's Housing First program, which ultimately placed him in a fourplex. He pays his rent from the income support he receives from the federal government. He is aware of how fortunate he is.

"I see some suffering the same way. I've been there," he said of his early days in Alberta. "To not suffer like that, I like that way."

Medicine Hat's approach is to streamline a one-stop system where all services and social needs can be met. Assistance will come from a myriad of sources – including the city, Medicine Hat College, the school board and the food bank, all of them committed to making things work and work well.

"They're all on the inside and they're pushing the agenda through their different networks," said Jaime Rogers, manager of the Homeless and Housing Development Department. "That's why this is working, because you have all these background players who have connections and legitimacy in the community."

Measuring poverty in Canada is not an exact exercise. The federal government has defined the low-income measuring point as having "half the median income of an equivalent household." In Statistics Canada's most recent survey, nearly five million Canadians were considered impoverished.

End Poverty Edmonton was unveiled in September of 2015 as united task force involving the city, the province's Poverty Reduction Strategy and the United Way's Capital Region. Its members are business people, academia and health-care and social-service workers. Their research told them one in eight Edmontonians earn less than $16,968 per year.

In Calgary, the Poverty Reduction Initiative first surveyed the public to understand what poverty meant and how it impacted people. Enough For All is a collaborative effort between the city and the United Way of Calgary designed to assist the one in 10 Calgarians living below the poverty line. The goal is to be poverty free "in a generation."

"I think it's a worthy initiative," said John Kolkman, research and policy analysis co-ordinator for the Edmonton Social Planning Council. "Is it overly ambitious? Some have argued that there's so much attention on the overarching developments that we miss what it really is – a series of small steps."

Mr. Kolkman pointed to Medicine Hat as proof that social ills can be cured.

"Medicine Hat has largely eliminated chronic homelessness – that's when people can't hold a place to stay no matter what is done. Medicine Hat has the gold standard for eliminating that," he said. "I've been to Medicine Hat and I've been impressed with how cohesive it is there between the city, the non-profit organizations, businesses, the labour unions. It's helped by having the population it has [being the right size to see positive results]."

Medicine Hat's approach to poverty has 17 milestones to gauge how it's performing. Yearly suicide rates will be monitored. So will the waiting lists for social housing. It will be, its administrators believe, very much a made-in-Medicine-Hat success story.

"I think communities now are starting to take a look at themselves and saying, 'What can we do to be part of the solution?' " Ms. Symmonds said. "Yes, provincial and federal governments are going to have to be a part of this. There has to be changes in systems across the board. That said, we have a lot to offer here."

A House of Commons committee on human resources, skills and social development will be in Medicine Hat Thursday for a public hearing. The committee is gathering information on how to reduce poverty. 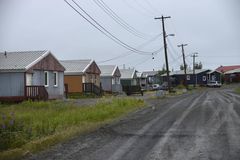