Next week's meeting between Saskatchewan and Alberta to discuss trade issues is on hold.

An Alberta government spokesman says Saskatchewan has asked for an extension given that the governing party is picking a new leader this weekend to replace Premier Brad Wall.

The meeting was to take place on Wednesday, but the two sides hadn't settled on a place.

They had agreed to meet in Lloydminster, on the provincial boundary, but Wall's government later asked that it be moved to Medicine Hat in southern Alberta, which is closer to Regina.

The meeting grew out of a dispute between the two provinces in December when Saskatchewan banned vehicles with Alberta licence plates at its job sites.

Saskatchewan said it was in response to similar rules at Alberta sites, but never provided any proof, and earlier this week it dropped the ban.

Jean Marc-Prevost, spokesman for Alberta's Economic Development Department, said Saskatchewan wants the meeting held sometime after a new Saskatchewan Party leader is chosen and a new cabinet is in place.

"We've asked them to set a date as soon as possible – and to honour the invitation from the Lloydminster Heavy Construction Association who offered to host us," said Prevost.

"We want to improve our trade corridors and harmonize regulations with our neighbours, so products from our provinces get to market faster."

Brad Wall laments the ‘less united’ state of the West as he prepares to leave office
January 24, 2018 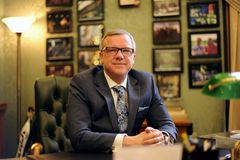 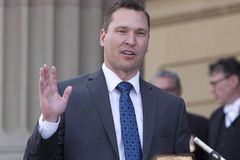