Hollywood star Michael Douglas offered up high praise for Canadian health care on Tuesday in a nod to the Montreal medical staff who made the breakthrough diagnosis of his throat cancer.

Mr. Douglas said a doctor at Montreal's Jewish General Hospital detected the disease that had eluded specialists in the United States. In gratitude, the Oscar winner agreed to add a new role to his résumé: fundraising draw for Canadian medical research.

The actor travelled to Montreal from New York on Tuesday to act as leading man for McGill University's annual fundraiser for head and neck cancer research.

In an interview at a Montreal ballroom where he was about to be honoree for the evening, a dapper-looking Mr. Douglas said getting the news was like being "hit by a truck." Yet when it came, he said, he had suspected it for months.

He said he'd been having bothersome symptoms over the course of nine months: pain in his throat, in the back of his gums and up toward his ears. He consulted various ear, nose and throat doctors and was prescribed antibiotics for what was thought to be an infection.

But while summering last year in Quebec's Mont Tremblant, where he shares a home with his wife, actress Catherine Zeta-Jones, Mr. Douglas went to see Dr. Saul Frenkiel at the Jewish General, a McGill teaching hospital.

The doctor put a tongue depressor in the actor's throat.

"I looked in his eyes and I immediately knew what I thought had been the problem," Mr. Douglas said. "We identified it and did the biopsy. It was the Big C."

"[The diagnosis]turned out to be extremely crucial," he said. "Because I was Stage 4 cancer."

"I felt something nine months earlier and brought it to the attention of my doctors," he said. "So there was frustration involved, to say the least."

Mr. Douglas was treated at the Memorial Sloan-Kettering Cancer Center in New York, undergoing aggressive chemotherapy and radiation. He declared in January that he was cancer-free, but continues to get regular check-ups and remains "cautious."

His biggest fear was having surgery to remove part of his tongue if other treatments failed. "I would imagine it affects your speech, to say the least. I don't think tongue cancer is the best cancer for an actor."

The experience in Montreal left the 66-year-old with a positive view of Canadian medical care, though the Wall Street star also displayed a good grasp of the country's health-care problems, such as wait times.

"The quality of health care in Canada is excellent. The question of when you can get in is something else," Mr. Douglas said. Delays do not appear to have been a problem for the A-list celebrity. Asked if he had to wait to see a doctor, he dodged the issue and replied, "Everybody was very thoughtful."

Dr. Frenkiel, co-chair of the fundraising event, said he agreed to see Mr. Douglas after getting a call from the actor's physician in New York. He still recalls the examination in August.

"Just an ordinary, careful throat examination was enough to raise my suspicions," said Dr. Frenkiel, chair of the Department of Otolaryngology at McGill. "I saw something I didn't like. His diagnosis wasn't obvious or straightforward. The findings were fairly subtle."

After the biopsy confirmed cancer, Mr. Douglas responded with courage. "He accepted the verdict. He didn't break down. He was strong about it," Dr. Frenkiel said.

The actor contacted Dr. Frenkiel personally to offer to raise funds, which impressed the doctor. "It gave me insight into the type of person he was. He didn't have to do it. We help many prominent people, but he said he would use his own celebrity to help us."

As he is at the box office, Mr. Douglas proved to be a draw on Tuesday. The Montreal gala sold a record 600 tickets at $375 a head - $750 for a VIP ticket offering a chance to mingle with Mr. Douglas at a pre-gala cocktail. Over $1-million was expected to be raised. He also auctioned himself off: Among the big prizes was the chance at a round of golf with Mr. Douglas and Ms. Zeta-Jones in the Laurentians, all for a valiant cause.

Michael Douglas to fundraise for Montreal hospital where his cancer was detected
April 18, 2011 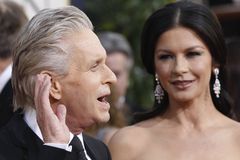 Catherine Zeta-Jones admits to bipolar disorder. Is she OK?
April 13, 2011

Douglas and Liberace: A match made in actor heaven
December 14, 2010
Follow Ingrid Peritz on Twitter @iperitz
Report an error Editorial code of conduct
Due to technical reasons, we have temporarily removed commenting from our articles. We hope to have this fixed soon. Thank you for your patience. If you are looking to give feedback on our new site, please send it along to feedback@globeandmail.com. If you want to write a letter to the editor, please forward to letters@globeandmail.com.
Comments