Glass tanks were drained of water, but there was no mistaking that the Asian carp were very much alive when government officials inspected suspicious cargo at two Ontario border crossings recently. Hundreds of the fish flopped up and down, their gills sucking air, in the back of two trucks likely destined for the Toronto area from the southern U.S.

These discoveries, part of a ramped-up effort to keep live Asian carp out of the province, led to two convictions this past week and the largest fine for a carp offence: a $50,000 penalty meted out to a Markham, Ont., fish importer.

Bill Ingham, an investigator with Ontario's Ministry of Natural Resources, doesn't know why the fish importers (the other is an American) didn't just make sure the fish were dead. While the province made it illegal in 2005 to possess live invasive fish, including all varieties of Asian carp, because of the significant threat they pose to the Great Lakes, there's no law against importing dead carp into the province.

"We're serious about keeping this species out of Ontario … because of the potential devastation they could have to our commercial and sport-fishing industries – both multimillion-dollar industries," Mr. Ingham said.

Checking fish cargo at the border is part of a new enforcement strategy. Before fall 2010, Mr. Ingham said the province mainly focused on monitoring grocery stores and wholesalers in the Greater Toronto Area.

Asian carp are a staple of many Chinatown grocery stores in Canada. Mr. Ingham said these fish are less expensive than native varieties, fetching about $3 per pound for chunks. However, live carp are sought after by some consumers. A handful of Toronto area grocery stores have been fined for selling live carp.

Asian carp are voracious plankton eaters and easily reproduce, making it difficult for other fish to find food.

Native to Eurasia, carp were imported to the southern U.S. four decades ago to control algae in fish ponds. After floods allowed the fish to escape into the Mississippi River system in the 1990s, concern has grown that they could make their way into the Great Lakes.

"The Asian carp are the perfect invaders. They are eating and breeding machines," said Jennifer Nalbone of Great Lakes United, a bi-national advocacy group. "They could have high impacts to our native fishery, in particular in some of warmer, shallower waters such as Lake Erie."

Mr. Ingham didn't know how many people in Ontario have been convicted for possessing live invasive fish under the federal Fisheries Act, but he doesn't believe the latest convictions signify a growing trend.

The $50,000 fine levied against Feng Yang of Markham, Ont., in a Windsor courtroom last week marked the second time Mr. Yang has been convicted for the same offence.

Owner of a fish-importing company, Mr. Yang was caught in November with about 1,800 kilograms pounds of live and dead bighead and grass carp piled in tanks in his truck at the Ambassador Bridge border crossing in Windsor, Ont. He had been fined $40,000 for possessing invasive fish in 2006.

In the case of the American fish importer, border and Natural Resources officials seized roughly 2,720 kilograms of bighead carp from a flat-bed truck at the Blue Water Bridge in Point Edward, Ont. The owner of Sweetwater Springs Fish Farm, based in Indiana, pleaded guilty on Monday in a Sarnia courtroom and was fined $20,000.

A third case involving a truck stopped with about 2,720 kilograms of invasive fish in January is before the courts.

Sarah Miller, a water-policy researcher with the Canadian Environmental Law Association, welcomes the province's focus on border checks but wants the government to go further. She believes Asian carp – dead or alive – should be banned altogether to reduce the risk of fish escaping into Ontario waterways.

"The economic costs of this can go very, very far," she said. 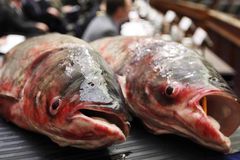