Canadian courses for Trump University were taught by a couple who used aliases, declared multiple bankruptcies, lost a real-estate licence and were sanctioned by securities regulators over a multimillion-dollar swindle, according to documents reviewed through a joint investigation by The Canadian Press and The Associated Press.

An Ontario husband-and-wife team identifying themselves as Dave Ravindra and Rita Bahadur taught Trump courses in Canadian cities in 2010, before Trump's namesake real-estate seminars folded amid mounting inquiries from U.S. regulators and complaints from former students.

Trump assured customers registering for his program that he had personally hand-picked only the best people to teach courses that would share lessons for attaining financial success.

Yet examples abound of teachers with spotty credentials — in the U.S., and now in Canada.

Read more: In his words: A look at some of Trump's most incendiary comments

The AP has already reported that Trump University staff and speakers included at least four convicted felons, including a Florida cocaine-trafficker and a former army sergeant court-martialled for sexually assaulting a fellow soldier's eight-year-old daughter. Half the 68 former staffers whose backgrounds the AP reviewed had personal bankruptcies, home foreclosures, credit card defaults, tax liens or other indicators of significant money troubles.

The news agency also has records showing Canadian courses taught by people with aliases for Ravindra Dave, 59, and Chandramattie Dave, 55, of Mississauga, Ont. — spouses who came to Canada from Guyana decades ago and whose various names appear in federal bankruptcy and provincial securities records.

The spouses have filed for personal bankruptcy at least four times since 2001 — twice by him, and twice by her, according to Industry Canada records. Public documents list at least nine different names for the couple, mainly combinations mixing the order of their first, middle and last names.

Ontario's stock-market regulator concluded last year that they defrauded numerous Canadian investors between 2009 and 2012. Records also show a "Dave Ravindra" with the same home address was stripped of his real-estate licence in Ontario, two years before he lectured for Trump University.

The settlement agreement published by the regulator, the Ontario Securities Commission, concluded Ravindra Dave started two investment companies more than a decade ago that never properly registered and sold securities without permission.

The couple organized real-estate seminars in Ontario, Alberta and British Columbia where they urged people to invest, promising fixed annual returns of at least 10 per cent. It said at least 34 investors in Ontario purchased these unregistered securities for approximately Cdn$5.4 million.

The securities regulator said those investors wound up losing most of that money.

"Chandramattie and Ravindra engaged in fraudulent conduct by making misleading or untrue statements to investors regarding the use of investor funds, and used investor funds for other business purposes, and for personal benefit," said the settlement document.

"(Their) statements were untrue or misleading and perpetrated a fraud on investors."

A former investor trying to recover some of her money declined to discuss the case, citing ongoing litigation. Linda Stark, a pensioner who lives near Toronto, would say only that the episode has taken a financial and emotional toll on her family.

As a result of their actions, the Daves were hit with 29 different penalties in the settlement agreement with the Ontario Securities Commission — a $300,000 fine, $25,000 in administrative costs, $3.3 million to be disbursed to injured parties and a slew of restrictions on their trading activity.

Chandramattie Dave is permanently banned from trading securities, and Ravindra Dave is banned for 20 years in penalties that apply elsewhere in Canada. They cannot manage investment funds, nor can they serve as directors or officers for securities-issuing companies.

During the period described by Ontario's securities regulator, they became involved with Trump University.

A lawsuit was filed over Trump University by New York's attorney general in 2013. He alleged it was a "fraud from beginning to end," geared toward pressuring cash-strapped students into buying ever more expensive seminars. In California, two federal class-action lawsuits have been filed on behalf of former students. One is headed to trial Nov. 28 — three weeks after the presidential election.

Jill Martin, a Trump Organization lawyer defending Trump against the lawsuit, did not respond to requests for comment, nor did Trump campaign spokeswoman Hope Hicks. Martin has previously accused AP of "cherry picking" ex-staffers with criminal histories and said those individuals were "not representative of the professional instruction staff engaged by Trump University."

Trump University offered three-day retreats in Toronto and Vancouver in 2010.

As part of his defence against ongoing lawsuits, Trump released more than 21,000 pages of student surveys. He cited the surveys to back his claim that most seminar participants were satisfied.

The surveys did show top ratings for the couple — listed there as Rita Bahadur and Dave Ravindra. They received high ratings as "subject matter experts" from students in the "Creative Financing" and "Lease Option Real Estate" courses.

Efforts to reach the Daves for comment were unsuccessful — through their listed phone numbers, email addresses, and social-media sites like a Facebook page for "Dave Ravindra" whose profile picture of a blonde-haired model turns up in a Google image search as a stock photo.

The family's four-bedroom, four-bath home by a Mississauga park was also seized, according to provincial records. However, municipal officials said a planned auction for the house was suspended when the couple declared bankruptcy.

Federal bankruptcy records list him as having liabilities of $1.9 million, with hers listed at $1.3 million. Records from the Ontario Securities Regulator list them as still owing more than $3.6 million in delinquent penalties and fines.

Clinton aims to shine spotlight on Trump in final days of U.S. election
November 3, 2016
U.S. presidential election: What you missed, and what you need to know
November 2, 2016 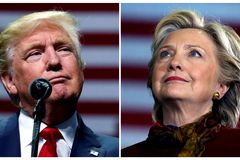 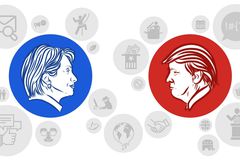