Mississauga Mayor Hazel McCallion is calling on municipal leaders in the Greater Toronto Area to band together to fight gridlock and push the provincial government for a new tax to finance the $50-billion cost of building new transit.

This is going to be a "tough sell" for residents, Ms. McCallion acknowledged to reporters on Thursday at Queens' Park, following a private meeting with Premier Dalton McGuinty.

Ms. McCallion said she urged Mr. McGuinty during their one hour meeting to ask the provincial transportation agency Metrolinx to look at several revenue raising options when it hands down a report in the fall on financing infrastructure improvements.

The traffic congestion in the GTA is turning many roads into parking lots during the morning rush hour and hurting the economy by making the region less attractive to foreign investors, Ms. McCallion said.

As unpalatable as higher taxes are for many residents, she said, she expressed confidence that she can sell people on the idea that there needs to be funding to relieve traffic congestion.

"Folks we've got to get a handle on the congestion in the GTA," Ms. McCallion said.

Mr. McGuinty did not address reporters following the meeting. Transportation Minister Bob Chiarelli told reporters that the government is not prejudging what the solution should be and welcomes the matter being discussed.

"I would like this issue to be discussed in the living rooms, dining rooms and coffee shops across the greater Golden Horseshoe because it's of importance to everyone, and it's certainly important for everybody who has to commute or drive to work," Mr. Chiarelli said.

Ms. McCallion said she has no preference at this point as to whether revenue for transit project is raised by hiking income taxes, sales taxes or vehicle registration taxes. But she did rule out tolls, except on new roads such as Highway 407.

The outspoken mayor also called on the federal government to play a bigger role in financing new transit systems not just in the GTA but elsewhere in Canada.

"The infrastructure needs of this country is in a crisis situation," Ms. McCallion said. The only major infrastructure project Canada has built in the past 25 years is the 13 kilometre long Confederation Bridge linking Prince Edward Island to New Brunswick, she said.

Ms. McCallion criticized the federal government for reducing the goods and services tax by two percentage points instead of allocating some of that revenue for municipal infrastructure projects.

"They thought it was going to have people rush out and buy all kinds of things they've never bought before," she said.

The mayor and Mr. McGuinty also discussed his government's plans to build a new casino to help the cash-strapped province generate a new source of revenue. The province's lottery corporation is proposing that a casino be built along Lake Ontario in either downtown Toronto or to the west in Mississauga, but Ms. McCallion said she isn't interested.

The City of Mississauga does not own land large enough to house an entertainment complex where people could gamble, dine and shop, she said.

"We have very little vacant land for the type of casino plan that is in the works," she said. 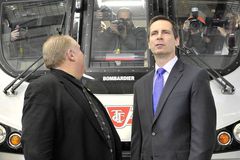 McGuinty courts McCallion in battle for Ontario's suburbs
May 3, 2018 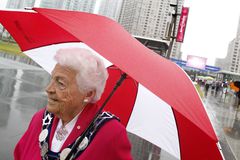 Hazel's 'fixer' in the middle of development scandal, inquiry finds
May 3, 2018 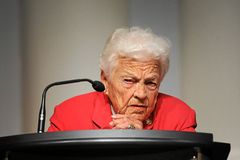