A judge has declared a mistrial in the case of a Yukon man whose mental state deteriorated so severely after more than three years in solitary confinement that he was found unfit to participate in his own sentencing.

The rare order of a postconviction mistrial in the case of 33-year-old Michael Nehass throws an already messy and protracted matter into further disarray and raises troubling questions about the intersection of mental health and criminal justice.

Mr. Nehass, a Tahltan First Nations man, has already served more time in Whitehorse Correctional Central awaiting trial and sentencing – much of it in solitary confinement – than his initial crime ever would have warranted, Yukon Supreme Court Justice Scott Brooker said on Wednesday.

Special report: Dispatches from an indefinite period in isolation

Mr. Nehass existed "in a state of limbo," he said, because the court lacked the jurisdiction to force Mr. Nehass into mental-health treatment and yet there was no way to continue with a dangerous-offender hearing without it.

"He cannot be subjected to a dangerous-offender proceeding while he is unfit and there is no evidence he will ever be fit without treatment," Justice Brooker said. "One must ask oneself on what basis can he now be held in custody. We are at a dead end. Mr. Nehass is left in a void.

The case stems back to Dec. 2011, when Mr. Nehass was charged with unlawful confinement, assault with a weapon and other charges. It soon bogged down in a series of psychiatric-assessment orders and mental-fitness hearings as Mr. Nehass, who opted to act as his own lawyer, told the court that his prosecution stemmed from an intricate conspiracy involving brain implants, Prime Minister Stephen Harper and investigations into murdered and missing indigenous women. Through it all, Mr. Nehass insisted he had no mental illness and opposed all efforts to have him labelled unfit.

On at least one occasion, the court held an emergency hearing to deal with Mr. Nehass's deteriorating mental condition behind bars at the Whitehorse Correctional Centre, where he was being held in solitary confinement after a serious of misconducts.

The proceedings made national headlines in 2014 when a judge apologized after Mr. Nehass was forced to appear before court even though he was naked.

That same year, after several psychiatric assessments, a judge determined he was unfit to stand trial. "It is clear that Mr. Nehass views the prosecution against him and this fitness hearing as an attempt to keep suppressed the information he possesses about individuals, entities and governments being involved in a vast network of conspiracies and cover-ups," Justice Michael Cozens said. "I find that this severely impacts his ability to understand the nature and object of the criminal proceedings."

But the Yukon Review Board, the body that rules on whether people are not criminally responsible in the territory, disagreed. It found that Mr. Nehass's delusions had no impact on his understanding of the court proceedings, and deemed him fit for trial.

Despite reservations expressed by prison staff at Whitehorse Correctional Centre and many others about Mr. Nehass's deteriorating mental health, the trial went ahead. On May 22, 2015, he was convicted of assault with a weapon, forcible confinement and breach of recognizance.

The Crown followed up the conviction with a dangerous-offender application, which, combined with a Charter application and a shuffling of Mr. Nehass's legal representation, pushed his sentencing farther into the future.

But in September of last year, his case received a jolt in the form of Toronto lawyer Anik Morrow. Hired to work on the dangerous-offender application, she reviewed court transcripts and found strong signs of a severely mentally ill man who was deteriorating over his time in solitary confinement.

During an application for a fitness assessment, two government employees – one the director of corrections for the Yukon, the other a contract psychiatrist – testified that neither Whitehorse Correctional Centre, nor the broader territory, have any capacity to deal with severe mental disorders aside from segregation cells.

"They also said that the segregation made the psychosis and the delusions flourish because he had 24 hours a day alone to reinforce it and to figure it out," Ms. Morrow said.

Testimony also revealed that correctional staff had raised the issue of Mr. Nehass's mental state several times with the Crown and suggested he be shipped out of the territory for proper treatment to no avail.

Ms. Morrow then struck an arrangement to have a full assessment done at Ontario Shores Centre for Mental Health Sciences in Whitby, Ont., more than 5,000 kilometres away.

There, two assessments determined he was clinically unfit to proceed with sentencing.

"It is likely that Mr. Nehass has been either on the cusp or frankly unfit for a lengthy period of time prior to the present evaluation," stated one of the assessments, raising questions as to whether Mr. Nehass should have been allowed to stand trial at all.

Justice Brooker put that thought aside in his ruling on Wednesday, saying the assessments were inconclusive as to Mr. Nehass's mindset at trial.

While a judge has discretion to order psychiastric treatment during trial, the same powers do not extend to sentencing, he said, leaving the case at a standstill and obliging a mistrial finding.

The mistrial ruling essentially resets the case and its years of plodding progress. After the decision, Crown prosecutor Eric Marcoux asked for Mr. Nehass to be returned from Ontario Shores to the Whitehorse Correctional Centre while the case is sorted out, a request Justice Brooker rebuffed.

The case will return to court on Feb. 28.

No penalty for Yukon judge over hearing with nude prisoner
May 12, 2018
640 days, four walls and one tiny window: Richard Wolfe’s dispatches from solitary
November 12, 2017 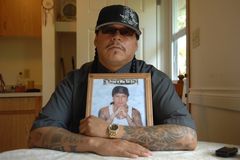 Adam Capay's lonely path to solitary confinement
June 19, 2017
Follow Patrick White on Twitter @Nut_Graf
Report an error Editorial code of conduct
Due to technical reasons, we have temporarily removed commenting from our articles. We hope to have this fixed soon. Thank you for your patience. If you are looking to give feedback on our new site, please send it along to feedback@globeandmail.com. If you want to write a letter to the editor, please forward to letters@globeandmail.com.
Comments are closed