Painter Molly Lamb Bobak, whose vibrant canvases can be found in collections throughout the country, started her career as the first Canadian woman to be sent overseas as an official war artist.

Fresh out of art school, she joined the Canadian Women's Army Corps in 1942. She longed to be sent overseas and follow in the footsteps of her family friend A.Y. Jackson, who had been a war artist during the First World War.

After V-E Day in Europe, she got her wish and was sent to London. There she met her future husband, 21-year-old Bruno Bobak, Canada's youngest war artist. The couple soon married. Ms. Bobak remained with the women's corps until 1946, documenting their training, marching and working.

"She had the ability to depict uniquely women's experiences," Laura Brandon, director of research, exhibition and interpretation at the Canadian War Museum said of Ms. Bobak, who died of esophageal cancer on March 1 at the age of 94 at the Veterans Health Unit in Fredericton.

"[Her art] was very personal," Dr. Brandon said. "It's an art about shared experiences and sharing those experiences." She added: "It is almost like conversational art."

Her painting Gas Drill, for example, shows a group of women trying on black gas masks. All looking in different directions, the women appear curious but not sure what to do with the masks, Dr. Brandon said. Ms. Bobak also painted backstage at army shows, depicting women getting dressed for the performances, and at a wedding feast, where she focused on the luscious food.

Throughout her life, Ms. Bobak remained supportive of Canada's war art. In 2000, on opening night of the exhibition Canvas of War – Masterpieces from the Canadian War Museum, which included work by both Mr. and Ms. Bobak, the couple sat eagerly in the front row.

Ms. Bobak was best known for her large, dynamic crowd scenes, such as parades and marches, which she started painting during the war. Over the years, she captured skaters on the Saint John River, athletes on the University of New Brunswick football field, various parades and processions, as well as local events in Fredericton such as the raising of the cross on the restored copper spire of Christ Church Cathedral.

"Each one of her paintings reveals something unique and personal as seen through her eyes. They are celebratory in their beauty," said Cindy Richmond, who organized a major retrospective in 1993 of her work at Regina's MacKenzie Art Gallery. "There is nothing pretentious about her work," she added. "Her authenticity is a large part of her work."

When she wasn't painting crowd scenes, Ms. Bobak had her watercolour brush in hand to capture the random beauty of flowers. Often she painted wildflowers or blooms in her husband's garden at their Fredericton home.

"I love flowers," she told the CBC in 1993. "Poppies [are] like crowds; they move in the wind. You don't organize them. You don't settle them into something. You paint them as they are, blowing or moving or dying or coming to birth and that is how it is with my crowds. I see something and it is spontaneous and it's moving and it's about the movement of something like crowds and colour or flowers and colour."

Everything she knew about watercolours, she once said, she learned from her husband. "I think she was inspired by what he was doing in that medium and ran with it," their son, Alex Bobak, said. "It was pretty magical to watch her with a watercolour brush."

Born in 1920 on Lulu Island, in the estuary of the Fraser River outside Vancouver, Ms. Bobak lived a privileged, though unconventional childhood. Her mother, Mary Williams, initially worked as a housekeeper for her father, Harold Mortimer-Lamb. At some point, her parents decided to move in together, along with Mr. Mortimer-Lamb's wife and their children. Molly was born and they all seemed to live happily together as an extended family.

Mr. Mortimer-Lamb was a wealthy art critic and collector who befriended Emily Carr and members of the Group of Seven, including A.Y. Jackson, who sometimes visited the family. Her father was also a photographer and painter, and filled their home with Buddha statues, pottery and wall hangings from Asia.

Not fond of school, Ms. Bobak received encouragement from her mother to study art. She enrolled at the Vancouver School of Art (now the Emily Carr University of Art and Design) and met artist Jack Shadbolt. He encouraged her development as an artist and remained a friend and mentor throughout her life.

After the war, the Bobaks had their son, Alex, and tried to make a living on the West Coast by painting and teaching. They later had a daughter. During those years, as she raised her children and taught painting at night school, it was hard for Ms. Bobak to make time for her own painting. But she remained committed to it and was among the first generation of Canadian women artists to earn a living from their art.

In 1960, she and her family moved to Fredericton, where Mr. Bobak became artist-in-residence at the University of New Brunswick and director of the university's art centre. They fell in love with the city and over the years contributed greatly to the visual arts scene there and throughout the province.

At their various homes in Fredericton, the Bobaks kept separate studios. While Mr. Bobak worked mostly in his studio at the university, Ms. Bobak painted at home. Calling herself a rather sloppy artist in the studio, she said her husband was the opposite. Terry Graff, director at Fredericton's Beaverbrook Art Gallery, remembers visiting the Bobaks' home in 2008. When he asked them how they had influenced each other's work over the years, he realized it was the wrong question to ask. "Molly was very quick to let me know that Bruno had not influenced her work in any way, and then Bruno immediately said the exact same thing about Molly. I chuckled to myself and quickly changed the subject," he said.

After moving to Fredericton, Mr. Bobak settled in and didn't enjoy travelling, but Ms. Bobak continued to travel whenever asked. She never refused a teaching request, whether it was to visit an elementary school or to do a three-day painting workshop with a group of middle-aged women in British Columbia. "I think she enjoyed teaching as much as painting," Alex Bobak said.

Dr. Brandon remembers taking a painting course with Ms. Bobak on PEI more than 30 years ago. After being inspired by the artist, Dr. Brandon painted wildflowers for two days, refusing to move on to another subject.

"She was an incredible teacher," Dr. Brandon said. "She had a respect for people's engagement."

A small woman, who might be described as bird-like in appearance, Ms. Bobak wore thick glasses because of her poor eyesight, and cared little for fashionable clothes. A warm and generous person, she not only mentored aspiring artists, but charmed almost everyone she met.

"Molly was a storyteller. You could call her a raconteur," Ms. Richmond said.

She liked to take a bus from Fredericton to Montreal just on the chance that she might meet someone interesting. "She had a spontaneous joy in people and dogs and that translated into her paintings. Her paintings are all upbeat," Alex Bobak said.

When she wasn't working, she loved to walk. With her sketchpad, she roamed through Fredericton and along the Saint John River. In the winter, she cross-country skied. She had her favourite spots to pick blackberries, fiddleheads and wild mushrooms.

Ms. Bobak continued to paint and draw every day until she was 84. Her eyesight had grown so bad that one day she simply stopped painting. Not wanting to produce a work of art she considered inferior, she never painted again. Her decision didn't seem to bother her, Alex Bobak said. She continued to visit with friends and walk. She was loved by all the kids and dogs in her neighbourhood.

For their work, Ms. Bobak and her husband were both named to the Order of Canada in 1995. In her honour, the Canadian War Museum has placed 10 of her paintings on display in the hallway leading to the exhibitions until March 31.

"She generated enthusiasm in everyone she met," Ms. Richmond said. "She was full of passion. She instilled that passion in her subjects."

Send us a memory of someone we have recently profiled on the Obituaries page. Please include "I Remember" in the subject field. 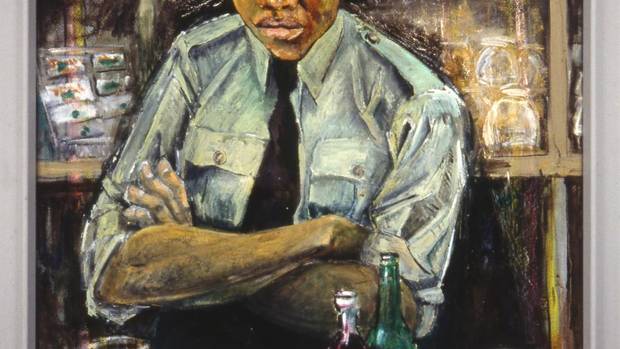