A friend of the Moncton shooting suspect will remain in custody for allegedly uttering death threats to law-enforcement officers last month, ordered to undergo a psychological evaluation before his next bail hearing.

Jasper Stam is accused of making the verbal threats between May 10 and May 18. Judge Anne Dugas-Horsman accepted the Crown's request Wednesday to continue to prohibit Mr. Stam from communicating with his friend, Justin Bourque, the man accused of killing three Mounties and injuring two others on June 4.

As friends and RCMP officers looked on from the public gallery at a provincial courthouse, Mr. Stam sat cuffed in the prisoner's box and told the judge he consents but "kinda" objects to the five-day evaluation ahead of Monday's bail hearing.

Mr. Stam has defended Mr. Bourque on Facebook and is known for having anti-police views. The RCMP has said the charges are not connected to the three homicides.

Mr. Stam's lawyer, Jean Cormier, said the examination is solely to determine his mental capacity to stand trial and is not related to his client's mental state at the time of the alleged incident.

Asked why he thinks Mr. Stam was charged Monday for something that allegedly occurred in May, Mr. Cormier declined to comment other than to say that might become "clearer" later.

As for the non-communication order, Mr. Cormier said the Crown has the right to request one, calling it "common in cases of this nature for various reasons." He said he has not seen disclosure and said it "will come out later" whether Mr. Stam denies the charges against him.

"There are allegations that haven't been proven," he said after the appearance.

Several RCMP officers said they were in court Wednesday to "observe" and keep abreast of the proceedings related to Mr. Stam, calling their attendance "standard procedure."

A longtime friend of Mr. Stam, Nathan Newell, said he was there when Mr. Stam was arrested earlier this week. Mr. Stam had been leaning into a car talking to someone, he said, when four police officers approached, asked Mr. Newell to "stand back" and cuffed the accused.

Mr. Stam spotted Mr. Newell in court on Wednesday and nodded, Mr. Newell raising his fist slightly in a show of solidarity.

"I can't think of an incident where he threatened a cop," Mr. Newell said, adding he's with Mr. Stam almost everyday, including during the time period the alleged incident took place.

Mr. Newell said he didn't know much about Mr. Stam's relationship with Mr. Bourque, adding he himself had met the shooting suspect several times but that nothing had stood out about him.

He said Mr. Stam's Facebook postings defending Mr. Bourque aren't out of character, since he tends to loudly voice his opinions and "is a very loyal person."

Another close friend and former roommate, Mathieu Bastarache, said he's frustrated that the non-communication order has called attention to Mr. Stam and whatever relationship he may have had with Mr. Bourque.

Tracy Petukhov, a friend and former employer of Mr. Stam, had earlier told The Globe Mr. Stam was close with the shooting suspect and a group of other young men. Like Mr. Bourque, he was homeschooled and from a large, religious family, she said.

She said conversations with Mr. Stam over the past year turned from normal to bizarre, adding that he believed police ambushed Mr. Bourque, not vice versa.

"He thinks the police wear uniforms so that they can be above the rest of us, so they can have power over us," she said, describing Mr. Stam as seeming "lost" in the past year or so.

Mr. Stam, who describes himself on social media as a 24-year-old musician, baker and anarchist, has defended Mr. Bourque in some of his Facebook postings.

"Justin had no mental illness. he did not do hard drugs. he did not do anyone who deserved respect any wrong. Not ever," Mr. Stam posted on the weekend, alluding to Mr. Bourque.

In an apparent reference to police, Mr. Stam added that Mr. Bourque did not "pretend to be above others" as the "pigs do downtown and on the roads."

Mr. Stam is slated to appear in court for a bail hearing the morning of June 16. 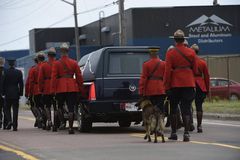 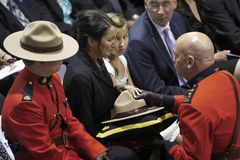 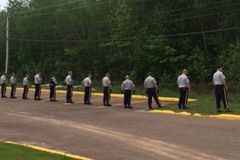