Following the suspension of the city's pit bull ban, Montrealers weighed in on the future of animal control in the city in a series of public consultations that began Saturday.

The city's Projet Montreal administration lifted the pit bull ban in December, following through with an election promise to do away with the most controversial aspects of a 2016 bylaw, and promised to consult with citizens before tabling new legislation in May.

City councillor Craig Sauve said a central theme of the discussions has been the need for more education for dog owners.

"(Citizens) want to make sure owners are understanding that if they're going to have a dog or a cat, they have to be responsible and take care of their animal so it doesn't cause any anxiety or security risks," he said.

He said the city is also considering barring some people from pet ownership if they have a criminal background or past history of animal abuse.

At a consultation in the Plateau neighbourhood, about a dozen citizens offered suggestions including mandatory obedience classes, obligatory sterilization, microchip identification, tighter regulations on pet stores and simplifying the registration process.

Ben Jackson, a longtime pet owner, said he wants the city to focus on aggressive animals instead of ticketing responsible owners for minor infractions.

"I think the city has a terrible history of ignoring the real problems, and attacking people and animals that haven't done anything," he said.

Anjali Choksi, who owns two dogs and two cats, said she wants the new bylaw to set out how complaints will be handled.

She said she's been hesitant to call the city about troublesome dogs because she worries they'll be automatically euthanized.

"What's important is to have a framework that makes all the steps public," she said.

Fomer mayor Denis Coderre enacted the pit bull ban in 2016 after a 55-year-old Montreal woman died after a dog attack in her backyard.

The bylaw prevented people from buying or adopting new pit bull-type dogs and required existing dogs to be sterilized and muzzled in public.

Sauve said the new bylaw will focus on reducing dog bites without targeting any specific breed.

Earlier this week, a Quebec man was convicted of criminal negligence causing bodily harm after his pit bull-type dog left a seven-year-old girl with severe damage to her face and skull in a 2015 attack.

Rather than condemning one breed, Sauve said the incident is proof of the importance of ensuring owners are responsible for their dogs.

He said numerous studies have shown that breed-specific legislation is inefficient, unenforceable, and does little to keep people safe.

"All dogs can bite, all dogs can be dangerous," he said. "Best practices worldwide state you can't target one breed."

In addition to the consultations, the city has created a website and online survey where residents can leave suggestions.

Sauve said the city plans to have a new bylaw in place by summer. 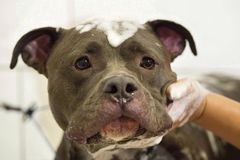 Quebec tables bill aimed at tightening regulations on pit-bull-type dogs
April 13, 2017
Opinion
Why Montreal’s ban on pit bulls is a reasonable restraint
April 6, 2017
Report an error
Due to technical reasons, we have temporarily removed commenting from our articles. We hope to have this fixed soon. Thank you for your patience. If you are looking to give feedback on our new site, please send it along to feedback@globeandmail.com. If you want to write a letter to the editor, please forward to letters@globeandmail.com.
Comments are closed