A burst of gunfire that killed a leading Montreal gang figure and shattered months of relative peace in the city's underworld may mark the launch of a new era of upheaval, or may just be the final act of the last war.

Ducarme Joseph, a 46-year-old once described by police as the city's most dangerous street gang leader, died in the middle of the road just metres from his mother's home in the rough-and-tumble neighbourhood of St-Michel last Friday night. Mr. Joseph led the 67 gang – named for a neighbourhood bus route.

The high-profile murder may finally be the execution of an old vendetta from the Montreal Mafia, or may be the Hells Angels sending a message to street gangs that the bikers are back after several years on their heels. Both theories may be true, according to Maria Mourani, the independent Montreal MP who has written two books on street gangs.

"It seems like a page being turned," Ms. Mourani said. "The Hells Angels are restructuring and reconstituting after almost being eradicated. The Mafia and the bikers may be renewing their historical relationship divvying up organized crime, and sending a message to street gangs that they must yield. I think it's two-for-one."

Mr. Joseph was believed to be linked to the 2009 shooting of Nicolo Rizzuto, the son of deceased Montreal Mafia kingpin Vito Rizzuto. Nicolo's death came at the height of a war within Montreal's organized crime. Police believe Mr. Joseph drove the getaway car, La Presse reported on the weekend.

"It seems clear to me he was involved," said Pierre de Champlain, a former RCMP intelligence analyst and author of a history of Montreal's Mafia. "But does it mean the Rizzutos are back in charge? I doubt it. They have been decimated, destroyed. But I'm sure there are loyalists left behind who decided to maintain the tradition that a death has to be avenged."

Montreal's criminal underworld has spent a decade in upheaval. The Hells Angels and the Rizzuto clan, the two most powerful organizations in the city, came under intense pressure in the mid-2000s as major police investigations led to dozens of arrests and hollowed out their ranks.

The ensuing power vacuum led to a bloody internal war in the Rizzuto clan. A rough count shows that, from 2008 to 2013, at least 45 men died, disappeared or were wounded by gunfire, including the family patriarch, Nick Rizzuto, and his namesake grandson. The violence accelerated in the fall of 2012, when mob boss Vito Rizzuto returned from prison and several of his family's known enemies died. Vito Rizzuto died unexpectedly from cancer in December, at the age of 67. The blood-letting ended with Mr. Rizzuto's death.

Meanwhile, Hells Angels jailed nearly a decade ago have started to trickle out of prison. The biker gang's own website recently announced a Montreal chapter is being re-established after years dormant.

Mr. Joseph was long thought to be living on borrowed time.

He narrowly escaped a shooting at the clothing boutique he owned in Old Montreal three months after the younger Nick Rizzuto was shot to death. A bodyguard and a shop manager died in that attack. Montreal police took the unusual step several years ago of publicly warning him that a contract was out on his life. In their book, Mafia Inc., writers André Cédilot and André Noel suggest the Rizzuto clan had put a $200,000 price on Mr. Joseph's head.

Mr. de Champlain said despite the relative calm of recent months, Montreal's underworld remains unstable. He and Ms. Mourani believe a kind of "round table" has unified Mafia factions for the moment, but nobody knows if peace will return after the latest killing. 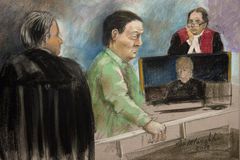