A man accused of trying to choke a fellow patient and suspected in the smothering deaths of two others at a Montreal psychiatric ward checked himself into hospital the very day the first patient died.

Hospital officials also revealed Thursday they were unaware of the suspect's lengthy and recent history of violence. Idelson Guerrier, 31, is charged with assault with a weapon in an attack on a 71-year-old female patient last Friday.

The attacks left hospital officials rattled and patient advocates and union officials calling for an intensive examination of how the facility handles potentially violent cases.

Paul Lespérance, the head of psychiatry at the Centre Hospitalier Université de Montréal, where the s tealthy attacks took place, described them as "unprecedented in Canadian medical-legal history."

The deaths, which date back to June 16 and 21, only became suspicious after the attempted strangulation on June 22. A coroner ordered autopsies, which confirmed late Tuesday that the two dead patients, aged 69 and 77, were cases of homicide-by-asphyxiation, officials said. No charges have been laid in the deaths.

Mr. Guerrier sought help at the hospital, where he was first sent to the intensive psychiatric care unit, on the day the first patient died, according to Dr. Lespérance. Mr. Guerrier was accompanied by family members and "wanted to be treated, was fearing for his own health," the doctor said.

The intensive psychiatric care ward allows patients to mix and move but is isolated under lock from the rest of the hospital. It has a patient-to-professional ratio of 2-to-1 and patients are checked every 15 minutes, officials said.

The two deaths raised no initial suspicions because the patients were old, had a long history of psychiatric problems and suffered from other serious illnesses, Dr. Lespérance said.

"We have a very strange and specific case that went through our fingers, as far as evaluating that this was a potential killer or aggressor in a cold way like this," he said. "We do have patients who sometimes are violent. We get signs. There were no signs here."

One sign might have been Mr. Geurrier's criminal past. Quebec court records reveal he has been convicted of assault and assault with a weapon on several occasions since 2003. The latest charge was laid in February.

Dr. Lespérance said clinicians seek out such information through the course of treatment and talking to family – a process that can take a long time. "There's no immediate passage for us to get this information from police. And it might sound a bit strange in this context, but there is also a confidentiality issue."

Paul Brunet, head of a patients' rights group, scoffed at the notion: "It's extraordinary this guy was placed there without more precautions."

There was no evident breach of security in any of the apparent attacks, Dr. Lespérance said, adding that the unit is a hospital, not a prison ward. He noted that the law limits the amount of security he can use. Cameras, for example, are forbidden for privacy reasons, he said.

Guy Brochu, a union official who represents hospital workers, said the ward implemented budget cuts of $200,000 a year ago. He declined to blame the attacks on cutbacks, but said his members were concerned at the time that care would be "insufficient." 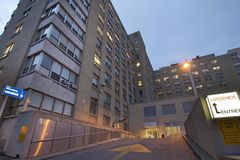 Monk suspected in killings at Dutch psychiatric hospital in 1950s
June 28, 2012
Follow Les Perreaux on Twitter @Perreaux
Report an error Editorial code of conduct
Due to technical reasons, we have temporarily removed commenting from our articles. We hope to have this fixed soon. Thank you for your patience. If you are looking to give feedback on our new site, please send it along to feedback@globeandmail.com. If you want to write a letter to the editor, please forward to letters@globeandmail.com.
Comments are closed