In most cities around the world, police officers are identified by a gun and a badge. In Montreal, they're recognizable by the likes of pink pants and bright plaid trousers.

A longstanding dispute over pensions has pushed the city's men and women in blue to wear anything but. Eager to express their displeasure but forbidden legally to strike, law enforcement in the city has taken to donning everything from garish camouflage pants and leopard-print leggings to jeans and other forms of dissident fashion.

But now, there are signs that the great police pant protest may have gone too far.

The officers' decision to spurn their uniforms in favour of colourful pants at the state funeral of former premier Jacques Parizeau this week sparked an unusually intense round of criticism, spanning from Montreal Mayor Denis Coderre and across social media to Quebec Premier Philippe Couillard, who called it disrespectful and now promises to legislate an end to the practice.

(The officers did wear their uniforms to the funeral of hockey great Jean Béliveau last December, leading one person on Twitter to quip that Mr. Parizeau's failing was that he helped build Quebec, he didn't win a Stanley Cup.)

The fashion protest has spread beyond city police. On Thursday, several Quebec Court judges suspended proceedings in Montreal after court constables showed up inside the courtroom in jeans. The gun-carrying officers are provincial employees who are involved in their own, separate salary dispute. Ironically, their job is to uphold decorum in the courtroom, including occasionally evicting citizens who are improperly dressed.

The provincial Justice Minister, Stéphanie Vallée, said the pant rebellion has gone overboard. "Uniforms should be worn, whether it's by constables or police officers. It's a question of respecting what they represent. They enforce the law and they should dress properly," she said in Quebec City.

The pushback comes in part because police dress-code dissent has become so ubiquitous in Quebec. It's been over a decade since police in the province first had the idea of swapping their uniforms for jeans as a pressure tactic. But now the practice has become so commonplace that about half the province's municipal police forces are out of uniform, according to the Quebec Union of Municipalities.

While the latest disagreement is over pension reforms, other flare-ups occur over contract talks or any number of labour issues, meaning there is almost always some police protest going on somewhere, the group says.

"It's become so common that when we see a police officer in uniform, we think they're protesting," said Suzanne Roy, a South Shore mayor who heads the provincial Union of Municipalities. In an interview on Thursday, she cited cases of terrified citizens mistaking police in combat fatigues for bank robbers. "Police are the representatives of law and order. They should represent order, not disorder. When they're not wearing their uniforms they're shooting themselves in the foot because it's their own image they're harming. To the public, they're losing credibility."

Municipalities have had trouble reining in the Brotherhood of the Outlandish Pants. As far back as 2008, Montreal's police chief said officers in camo pants presented an image of "confrontation" and "repression" that could frighten immigrants who had survived military dictatorships. Last December, the city of Châteauguay on Montreal's South Shore went to court after its officers doffed old-West cowboy hats and sheriffs' stars in their pension protest.

But judges and labour boards have sided with the police, saying they were within their rights and were not jeopardizing public safety.

All that might change. Mr. Couillard said his Liberal government would introduce measures this fall to ensure police uniforms are respected. "I would have hoped that the officers themselves, within their own ranks, would say, 'We can't act this way,' " the Premier said after Mr. Parizeau's funeral. "But that didn't seem to have happened, unfortunately." 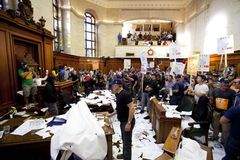 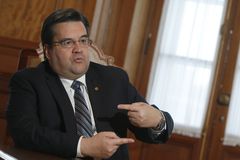 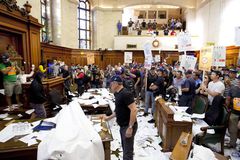