During an emotional memorial service, Tim Bosma's widow recalled the night her husband took two men on what was supposed to be a quick test drive of his truck.

"The devil led the vilest form of evil down my driveway and it smiled at me before taking Tim away from me," Sharlene Bosma said.

Ms. Bosma last saw her husband on May 6. One week later, his badly burned remains were discovered on a rural property outside Kitchener, Ont.

More than 1,600 mourners remembered Mr. Bosma – who was described as a proud dad, a playful uncle and a devoted friend – on Wednesday in the same Hamilton banquet hall where he and his wife danced on their wedding night.

Ms. Bosma choked back tears as she said her two-year-old daughter asks: "Where Daddy go?" when she tucks her in bed at night. "Daddy loves you and he's with Jesus in heaven," she tells her.

A few days ago, family and friends planted trees at the couple's home in Ancaster, just outside Hamilton, including a flowering crab apple – so chosen because it was in full bloom on the day Mr. Bosma's remains were found – for his little girl.

"Sharlene, to my dying days, I promise that our little girl no matter where she lives will have a flowering crab apple tree in her backyard to remind her of her Daddy's love for her," said Hank Bosma, Tim's father.

As the crowd waited for the service to begin, photos of Mr. Bosma flicked across large screens at the front of the ballroom. The images showed a smiling blond boy opening Christmas presents, a tuxedoed groom making goofy faces on his wedding day and a proud dad holding his newborn baby girl.

Mourners began gathering at Carmen's banquet hall well before the memorial service began. More than 900 chairs were filled almost an hour beforehand and overflow crowds stood along the walls and at the back of the room.

John Veenstra, the minister at the Ancaster Reformed Church, where Mr. Bosma worshipped, wore a purple shirt in a nod to the theme colour at the couple's wedding. The Bosmas held their reception at Carmen's on Feb. 13, 2010. The owners donated the facility for the memorial service and reception.

Mr. Bosma, 32, disappeared after taking two men to test drive his 2007 black Dodge Ram pickup truck, which he had advertised for sale online.

Mr. Millard, who comes from a well-known Ontario aviation family, has maintained his innocence through his lawyer. The 27-year-old remains in custody in Hamilton.

Police are still seeking two other suspects in connection with Mr. Bosma's death.

Editor's Note: An earlier version of this article, which has been updated, had an incorrect quotation from Sharlene Bosma.

updated
Accused in Bosma murder wrapped in mystery
May 15, 2013 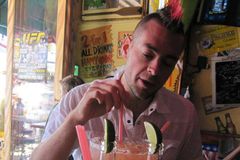 Inside the life of Dellen Millard, the man charged with killing Tim Bosma
May 18, 2013 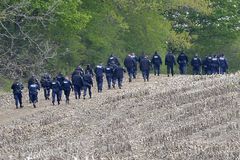 Police probe link between Dellen Millard and missing woman
May 19, 2013 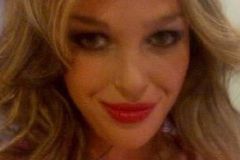