Thousands marched through the streets of Montreal on Saturday afternoon to denounce Quebec's proposed charter of values, calling on Premier Pauline Marois to put an end to "politics of division."

The protest, billed as an inclusive, multicultural event, drew many members of the Muslim and Sikh communities. Others who claimed no religious allegiance also took part.

A group from a local mosque walked with a large banner that read: "Multi-faith gathering for peace."

"This is a time for all religions to come together for what they believe in," said Noman Safdar, a 24-year-old engineer who was holding up the sign.

"We came here for freedom," said Safdar, originally from Pakistan and wearing a Muslim cap.

"You can't go and impose things on people like this."

The plan unveiled earlier this week has sparked a heated debate.

While opinion polls indicate there is some support for the charter, mainly in the province's outlying regions, opponents have called it discriminatory.

The PQ, which holds a minority in the provincial legislature, contends the move is necessary to ensure the public service presents a neutral face and protects equality between men and women.

For many at the rally, though, the most immediate concern was how such a law would limit their job prospects.

Salma Ahmed, a 17-year-old high school student who wears a Muslim headscarf, said she doesn't want her career options to be hampered.

"We're all really worried at school," said Ahmed, who came to the rally with several friends who also wear headscarves.

The march began at a downtown square that was the site of last year's nightly demonstrations against former premier Jean Charest's tuition hikes.

This time, though, the target was Marois.

One popular chant referred to her proposal as the "charter of shame." Another, which derided the Premier for the "politics of division," finished with the punch line: "Quebec is not France."

Marois has praised that country's secular integration model, which includes a ban on hijabs in schools.

Harbhajan Singh, a 60-year-old Sikh who wears a turban, said he worries the proposed law could lead to a "brain drain" like the one he witnessed following the 1995 Quebec referendum on sovereignty.

"We have been living very peacefully here, with no problems," said Singh, who emigrated from India 40 years ago.

Not all religious organizations were on board with the protest.

A Jewish group said it decided not to participate in the rally because it was planned for the holiest day on the Jewish calendar, Yom Kippur.

Quebec's Centre for Israel and Jewish Affairs said it's against the charter of values but doesn't want to be associated with some of the organizers, which included the Quebec Collective Against Islamophobia.

In a statement, the group said the Jewish community "will not accept to be co-opted or manipulated by the dubious objectives of some of the organizers of the demonstration, who include religious radical fundamentalists with whom the Jewish community will never make common cause."

Adil Charkaoui, a spokesman for the Quebec Collective Against Islamophobia, said the demonstration was meant to bring together representatives from all religions.

He added that it's only one of several planned actions against the proposed charter.

"We were all together to say to Marois, 'we don't want your charter,'" he told reporters.

"This kind of politics is very dangerous for Quebec society." 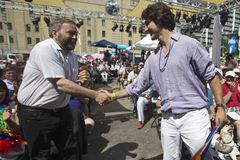 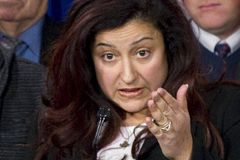 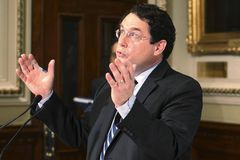 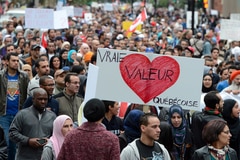 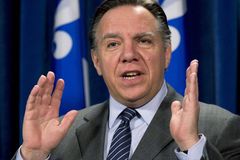