Ottawa says Myanmar's de facto leader and its military are to blame for failing to stop violence that's forced more than 120,000 Rohingya Muslims to flee to Bangladesh. Myanmar's Aung San Suu Kyi, a Nobel Peace Prize winner and honorary Canadian citizen, blamed "terrorists" for the conflict. But Ottawa has a different view: "The violence is still ongoing so obviously there's a failure on part of the military, on part of the government," Parliamentary secretary to the Minister of Foreign Affairs Omar Alghabra said.

Suu Kyi has gained international attention for her fight against military rule, but is facing criticism for her response to the plight of the Rohingya, who suffer from restrictions on their basic rights. In a column in The Globe and Mail, former foreign affairs minister Lloyd Axworthy urged Canada to send a request to the Nobel Committee to strip Suu Kyi of her prize.

If you like this newsletter, you might want to subscribe to our brand new Evening Update newsletter. It's a roundup of the important stories of the day that will be delivered to your inbox every weekday around 5 p.m. ET.

With the economy booming, the Bank of Canada has hiked its key interest rate for the second time in less than two months. The quarter-percentage-point hike brings the rate to 1 per cent. Other lenders followed suit by raising their own prime lending rates. The Canadian dollar jumped to nearly 82 cents (U.S.). on word of the hike; economist David Rosenberg says this rate hike has him rethinking his perspective on the loonie. The move will likely discourage people from buying homes and put pressure on those that have major debts. The Greater Toronto Area has already seen major price declines of late and this could lead to a further downward swing.

This year's Toronto International Film Festival starts tonight with a gala screening of Borg/McEnroe, a tale a tennis rivalry from 1980 starring Shia LaBeouf. For a complete guide to what's playing at TIFF, check out this page. The Florida Project, starring Willem Dafoe, James Franco's The Disaster Artist and Canadian production The Crescent are just a few of the films given high praise by our reviewers.

A $15-million donation to the Centre for Addiction and Mental Health in Toronto is aiming to help scientists tap into data to better understand the causes of mental illness. Artificial intelligence is now being used to help analyze an overwhelming amount of medical records, brain scans and genetic tests. "We have this sea of data. We have the computational capability … [but] we don't have enough scientists," said CAMH president Catherine Zahn. The funding, from the family of mutual-fund investor Robert Krembil, helps address that gap.

Global markets are largely on the rise early Thursday, and the Canadian dollar is still riding high. Tokyo's Nikkei gained 0.2 per cent, though Hong Kong's Hang Seng lost 0.3 per cent, and the Shanghai composite 0.6 per cent. In Europe, London's FTSE 100, Germany's DAX and the Paris CAC 40 were up by between 0.1 and 0.6 per cent by about  4:35 a.m. ET. New York futures were down. Markets were awaiting word from the European Central Bank on just how close it is to scaling back its stimulus program. The loonie is sitting at just shy of 82 cents (U.S.), having shot up Wednesday on the Bank of Canada's rate hike and outlook. Analysts believe it could shoot higher still. Oil prices dipped over fears that Hurricane Irma in the Caribbean could interrupt crude shipments in and out of the United States.

With NAFTA, the environment is not a 'social issue'

"Federal Conservative Leader Andrew Scheer complained this week that the Trudeau government is putting the renegotiation of the North American free-trade agreement at risk by raising non-trade issues related to the environment, Indigenous rights and gender equality. He may have a point – on two of the three items. Mr. Scheer is making the same mistake his predecessor, Stephen Harper, did when he suggests that the economy and the environment aren't linked. The environment is not a "social issue," as the Conservative Leader likes to call it. Canada has good reason to want to prevent NAFTA countries from trying to attract investment by lowering environmental standards – something President Donald Trump seems keen to do." – Globe editorial

Canada must dare to help the 'DREAMers'

"Canada's response cannot be naively idealistic, nor should it be fuelled by cynicism. We cannot welcome each and every one of these so-called DREAMers, but at the same time we shouldn't refuse their entry into Canada altogether. Canada has well-established immigration streams where each and every application is reviewed on its merits. The economic stream could be particularly well-suited to this cohort. Their English is impeccable and, because of the DACA program, many have graduated or are in the process of completing a university or college education. DACA recipients are skilled, relatively young and have North American job experiences that are in demand in Canada." – Ratna Omidvar, independent senator for Ontario

Sept. 7, 1936: Benjamin was the last known marsupial of its kind. The name was posthumously given to the thylacine, commonly known as the Tasmanian tiger that had lived in captivity until it died of neglect 81 years ago today. The thylacine was a nocturnal creature that looked like a dog with a stiff tail and stripes on its back; both males and females had an abdominal pouch (much like a kangaroo). Benjamin was trapped in 1933 and lived in a zoo in Hobart, Tasmania, for three years. But it was locked out of its enclosure during a cold Tasmanian night and succumbed to freezing conditions. Although believed to be extinct, there have been reported sightings ever since – as recently as March this year. The date of Benjamin's death has been declared National Threatened Species Day in Australia to encourage the protection of its own animals and ecosystems, including the Tasmanian devil, blue whale and the wedge-tailed eagle. – Shelby Blackley

What you need to know about DREAMers and their future
November 12, 2017 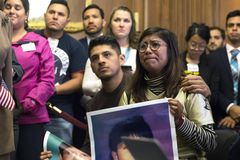