The vast majority of Canadians favours a total ban on guns in urban areas, a new poll suggests.

According to the poll, conducted by Ekos Research Associates for The Canadian Press, 69 per cent of those surveyed agreed with the statement "I think that there should be a strict ban on guns in urban areas."

Support was highest in Quebec at 76 per cent and lowest in Alberta at 48 per cent.

The federal Liberals are currently at work on legislation to follow through on campaign commitments to tighten up restrictions on guns, though an earlier suggestion a new bill could be introduced before the end of the year now seems unlikely.

The Liberal plans don't involve any kind of total ban and, indeed, no political party has ever suggested the idea, noted Ekos president Frank Graves.

But widespread support for the concept suggests there's room to simply stop tinkering with existing gun laws and put in place something more ambitious, he said.

"I'm not saying the operationalization wouldn't be complex but this isn't a moon shot and it's been done in other jurisdictions," Graves said.

"I think Canadians would settle for something close — it wouldn't have to be a strict ban, but anything to move the needle here."

Guns are not involved in the vast majority of crimes in Canada but there have been increases in gun-related violence.

The agency also reported last month that 587 people took their own lives with the use of a firearm in 2014, up from 544 the year before.

A standard response to why government doesn't go further to crack down on guns is politics and the perception that urban Canadians view the issue far differently than rural dwellers, who use guns to hunt for food or protect themselves in remote regions beyond the every-day reach of law enforcement.

The political divide has played itself out repeatedly during national debates on gun control. In 2011, two NDP MPs from Thunder Bay, Ont., were disciplined when they broke ranks and voted in favour of the Conservative government's legislation to repeal the gun registry.

During the Conservative leadership race earlier this year, a clear position on firearms-related policy was a must-have for candidates, many of whom actively courted firearms enthusiasts.

But the Ekos survey suggests there's support across the political spectrum for restrictions that are limited to urban areas — 86 per cent of respondents who identified themselves as Liberals, 56 per cent of Conservatives and 75 per cent of New Democrats backed an urban ban.

The automated land line and cell phone survey of 2,287 Canadians was carried out Nov. 10-30 and is considered accurate within 2.1 percentage points, 19 times out of 20.

In 2015, the federal Liberals made several campaign commitments related to firearms. They've fulfilled some, including a revamp of a national advisory board and increased funding to the provinces to address gun violence.

That money was announced last month at an event in Surrey, B.C., where a federal by-election is underway in a community that has a long-standing issue with guns and gangs.

The Liberals also pledged to require enhanced background checks for anyone seeking to buy a gun, and prospective buyers must also show a license. Those who sell guns would, among other things, be required to keep an inventory of stock and sales.

Their platform also promised to get more weapons off the streets by strengthening controls on handguns and assault weapons.

A group that includes family members of women killed at a shooting at the Ecole Polytechnique in Montreal in 1989, as well as survivors of a shooting at Montreal's Dawson College in 2006 and one at a mosque in Quebec City last year gathered on Parliament Hill last week to press the Liberals to commit to a firm timeline for the changes.

"It is an important topic and efforts in the past in dealing with a topic that has the potential to, in some places, be controversial has ended up foundering," he said.

"When I put forward the legislative package I want to make sure that it's a package that will succeed. That's my objective and we'll get it done."

People whose lives have been changed directly by gun violence say they've been waiting too long. 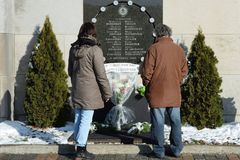 Americans crossing into Canada carrying guns with ‘alarming frequency’
August 8, 2017
Trudeau Liberals delay gun-marking regulations despite election promise
May 19, 2017
Report an error
Due to technical reasons, we have temporarily removed commenting from our articles. We hope to have this fixed soon. Thank you for your patience. If you are looking to give feedback on our new site, please send it along to feedback@globeandmail.com. If you want to write a letter to the editor, please forward to letters@globeandmail.com.
Comments