Several players on the Vancouver Canucks have been benched because they are suspected to have the mumps. The same thing has happened to the Brandon Wheat Kings in Manitoba, and the Medicine Hat Tigers in Alberta. (Some will recall another outbreak in the NHL in 2014 that sidelined Sidney Crosby, among others.)

Lest you think that hockey causes mumps, at least 17 bar patrons in Toronto have been diagnosed with mumps in recent days, and there are a number of outbreaks at college campuses around the U.S.

What all the infected have in common – other than the swollen glands and aches that characterize the illness – is that they are young, and they tend to play and live in communal settings where respiratory droplets (read: saliva) are shared, willingly and otherwise, by sharing of drinks, water bottles, kissing and rough-housing.

Upon seeing the headlines, many would have the knee-jerk reaction of blaming the anti-vaccination movement. But the story is a bit more complicated than that.

Most of those who have contracted mumps are vaccinated – but under-vaccinated.

To understand why, you need to know a little history, and the quirks of Canadian vaccination policies.

In 1970, when mumps vaccination became widespread in Canada (it was 1967 in the U.S.), it was assumed that one dose would be sufficient. But, over time, it became clear that protection wears off and a booster shot is needed.

In 1996, Canada moved to a two-dose schedule. Today, most children get a combined measles-mumps-rubella (MMR) vaccine at 12 months and again at 15 months or at age 4, depending on where they live. In some provinces, they get chickenpox vaccine at the same time (MMRV).

Practically, that means most kids born before 1996 – the demographic of NHL players, avid bar-goers and university students – have waning immunity. Also, many kids born after 1996 only got one shot, especially if they moved provinces. (Stupidly, Canada does not have a single vaccination schedule.)

They need a booster vaccine, especially if, like hockey players and university/college students, they spend a lot of time in communal settings.

Increasingly, public health officials are coming to the realization that a second mumps booster shot is probably needed as well.

The case of the Toronto bar patrons, all aged 18-35, provides a good clue why. Toronto Public Health officials have found that 40 per cent of those infected had actually received two MMR shots as children.

However, the inadequacy of the mumps vaccine is not the sole factor fuelling the current outbreaks. Theoretically, under-vaccination has been a problem since 1970. (Virtually everyone born before that time is assumed to have been infected and have immunity.)

But the reason mumps (as well as measles) cases are rising markedly is because the number of people who are vaccinated is falling. When large numbers of people are immunized – roughly 90 per cent – there is herd immunity, meaning even those who are unvaccinated are protected because a pathogen can't get a foothold. But today, with childhood vaccination rates as low as 70 per cent in some provinces (and as low as 40 per cent in some communities) it's easier for viruses such as mumps to spread.

The other problem is that, because it's been decades since childhood illnesses were widespread, we tend to forget the damage they can inflict.

Mumps, for example, is characterized by swelling of the glands, giving sufferers chipmunk-like cheeks. But that swelling can also happen to the testicles, and can lead to infertility. (In Toronto, five of the 17 infected suffered orchitis, the medical term for swelling of the testes.) In some cases, the fever that accompanies mumps can cause deafness, or lead to life-threatening conditions, such as pancreatitis and meningitis (swelling of the brain).

More than anything, the current outbreaks should serve as a reminder that childhood diseases are not kid's stuff, and that vaccination should not be taken for granted. 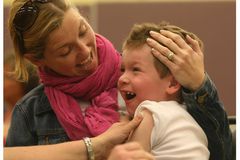 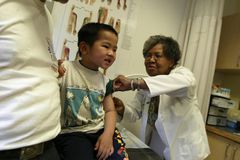