It was a gunshot wound to the head that killed a five-year-old boy on a central Alberta First Nation.

An autopsy conducted in Edmonton Tuesday confirmed the cause of death and that the child, Ethan Yellowbird, was struck only once.

Ethan was asleep in his bed around 3 a.m. Monday morning when gunshots were fired blindly into the bungalow he was staying in on the Samson Cree Nation, one of four townsites that make up the Hobbema reserve an hour or so south of Edmonton. A woman in the home was also injured.

It was the second shooting of the night in Samson. Around 1:30 a.m., shots were fired blindly into another home, but didn't hit anyone.

Police have made no arrests, and weren't anticipating making further announcements Tuesday. They once again appealed to the public for information.

The community of just over 3,000 was left reeling in the wake of the shooting. It has battled gang problems for several years.

"Our members are experiencing shock and grief following the tragic incident," Chief Marvin Yellowbird said Monday. The Chief is the child's grandfather. "Samson Chief and Council stand ready to do all things necessary to ensure the perpetrators of this unspeakable crime are brought to justice."

The death of the boy sent ripples across Canada. At the annual meeting of the Assembly of First Nations in Moncton Tuesday, National Chief Shawn Atleo expressed his regret.

"We have reached out to the family and the leadership. ... They really feel that this is the most horrific, terrible setback," Mr. Atleo told hundreds of delegates gathered at a local arena.

"This kind of tragic news brings heightened focus to the work that we've gathered here to do over the next three days," he continued. "We have to demonstrate the leadership and show the courage that is needed to say, 'No more.'"

There have been several high-profile shootings and deaths in the community. Three years ago, toddler Asia Saddleback was shot in similar circumstances – a bullet fired wantonly into her home. She was eating at the time. Young Asia survived, and the bullet remains lodged near her heart. Other victims include a 15-year-old killed over Christmas. His father remains grief-stricken, and hasn't yet visited his son's grave.

The talk this week within Samson, however, has focused not on grief, but on moving forward – what the community can do to solve its gang problem. About six loosely organized aboriginal gangs operate in Hobbema, RCMP say. That figure is lower than in recent years, and police say the overall crime rate has dropped since young Asia's shooting (though specific numbers weren't available).

The solution lies in more security, social programs for youth and community programming, but it's a complex fix – the reserve is under federal jurisdiction, tying the hands of the province.

"As our Solicitor General [Frank Oberle]is often heard to say, we can't arrest our way out of a gang problem," Justice Minister Verlyn Olson, the local MLA, said.

Violence had subsided since the winter, and local officials had hoped they were making progress until Ethan's death.

"This was a step back," area RCMP Superintendent Curtis Zablocki said Monday. "We hope to take two steps forward moving into the future, however." 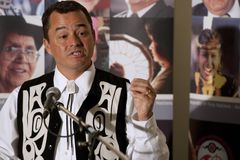