The Royal Canadian Navy's new supply vessel is preparing to train its combined civilian and military crew at sea – in what the ship's owners argue will be a less costly way to operate auxiliary vessels.

The MV Asterix steamed from the Davie shipyards near Quebec City and berthed at a Halifax pier this week, in the latest step forward for a federal procurement contract that has been touted for its rare combination of being both on time and on budget.

The converted civilian container vessel – officially referred to as an Interim Auxiliary Oiler Replenishment Vessel – went through a refurbishment that has made it capable of replenishing food, fuel and ammunition of navy ships.

The navy is leasing the vessel from private-sector builder Federal Fleet Services Inc. for five years, with a five-year option afterwards.

The company has also said it would be willing to sell the vessel to Canada, and is pushing for a contract for a second supply vessel, the MV Obelix, which would also be built at the Davie shipyards.

John Schmidt, senior vice president of Federal Fleet Services, said in an interview Thursday that the training of the combined crews, with about 36 civilians and 114 military personnel, started in virtual reality last year.

He said the training at sea will begin in mid-January and it's anticipated it will last two to three months at least, with the navy making the final call on when the crew is prepared for its first mission.

All of the ship operations, watchkeeping and ship maintenance will be carried out by the private operator, with the navy personnel focused on specialized operations such as the transferring of fuel, operating helicopters and handling the military cargo, said the executive.

Schmidt said the goal in the months to come will be to ensure the two groups operate smoothly together.

"All of these scenarios have been role-played. ... There's a protocol that's been developed."

The executive said there are examples of other militaries that use merchant mariners that augment their regular fleet, such as the Royal Australian Navy and the American auxiliary fleet.

However, the mix of private and military employees is a shift for the Canadian supply ships.

Schmidt says the combined civilian-military staff will save money because fewer civilian employees are needed for specific tasks such as watchkeeping than the Royal Canadian Navy would usually require.

"It keeps people focused on what their specialty is," he said from Ottawa. "We focus on the commercial side which is our normal bread and butter and ... it provides the navy a more cost effective approach."

Overall, with the cost of personnel included, Schmidt's latest estimate of the cost to taxpayers for the vessel is $659-million.

Ottawa has said it plans on acquiring its second supply ship in 2021 from Vancouver, which has a $4.1-billion contract for two vessels.

Federal Transport Minister Marc Garneau said in early December he recognized the expertise of Davie workers but the federal government simply didn't need another supply ship from the Quebec shipyard.

"We cannot artificially create a need for something that doesn't exist," he told reporters in Montreal.

He said the federal government was analyzing the future shipbuilding needs of the navy, coast guard and ferry services, which may provide opportunities for Davie in the future. 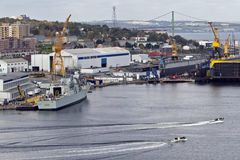 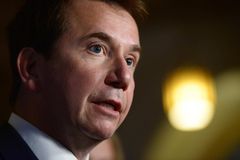