A veteran Toronto art dealer hopes to reap the benefits of a new biography that appears to have solved most of the mysteries surrounding the family history of Vivian Maier, the Chicago nanny whose remarkable street photographs achieved international fame after her death in 2009.

Stephen Bulger is planning to exhibit as many as 50 images by Ms. Maier at his commercial gallery starting June 25. The show, to run through Sept. 10, is called Meaning without Context.

While Mr. Bulger is no stranger to exhibiting Ms. Maier's wares – he hosted her first public Canadian showcase in mid-2013, then another Maier exhibition in mid-2014 – the planned upcoming show is something altogether different. It's going to feature prints Mr. Bulger intends to make from some of the 17,500 black-and-white negatives he owns, purchased in December, 2014, from Jeffrey Goldstein, a Chicago collector/artist.

Mr. Goldstein is, with another Chicagoan, John Maloof, one of the two major collectors of Ms. Maier's works who have largely propelled the photographer from obscurity to global recognition, with all the likely millions of dollars associated with the phenomenon.

Mr. Goldstein sold the negatives to Mr. Bulger – who'd shown and sold Mr. Goldstein prints of Ms. Maier's photographs at his 2013 and 2014 shows for $2,000 (U.S.) to $5,000 – because the Chicagoan feared the negatives might be seized by administrators with Illinois' Cook County.

They have asserted control, albeit temporarily, of the Maier estate due to the lack of clear, living heirs to the estate – testament to the murky life circumstances of the reclusive Ms. Maier. She died at 83, alone, childless, poor, with no will and no apparent immediate relatives, the 150,000 negatives she shot stuffed in storage lockers that were sold at auction in 2007 after she failed to make rent.

Parts of Ms. Maier's life story have been uncovered and clarified in the past five years, some of them in Finding Vivian Maier, a 2013 documentary co-produced, co-written and co-directed by Mr. Maloof that went on to earn an Academy Award nod.

But this week has seen the publication of what seems the most complete and thoroughly researched biography to date by Ann Marks, a retired 58-year-old Dow Jones executive from Long Island. She decided to take on the Maier file as a personal project after watching Finding Vivian Maier last January.

Her research, available at vivianmaierbio.wordpress.com, shows that Vivian did have a single brother, variously called Charles, Carl and Karl, born in New York in 1920, the son of Charles and Marie Maier (née Jaussaud). They separated in 1927, a year after Vivian's birth. Charles went on to have a troubled life – he was a musician, a music teacher and a dishonourably discharged soldier who did copious illegal drugs and stints in jail before dying, childless, it seems, in a New Jersey institution in 1977.

Mr. Goldstein said of the new biography: "I think [Ms. Marks's] story is the most spectacular thing to come along since the discovery of Vivian Maier."

Earlier, Cook County authorities deemed Charles the rightful heir but, apparently not knowing he was dead, established an almost 10-year window of opportunity for him or his descendants to make a claim. Previously, a genealogist hired by Mr. Maloof determined that Sylvain Jaussaud, a distant cousin to Vivian living in the French Alps, was the only legitimate heir, prompting Mr. Maloof and Mr. Goldstein to strike a copyright deal with him.

However, this was disputed in 2014 by a U.S. lawyer, David Deal, who argued the most immediate heir was another distant relative, Francis Baille. It turns out that in 1896, Vivian's maternal grandmother, Eugenie Jaussaud, gave birth out of wedlock to a daughter in France. However, when the father, Nicolas Baille, declined to recognize his paternity, Eugenie fled to New York in 1901.

The inheritance issue likely won't be settled soon. Nevertheless, Mr. Bulger has hired a lawyer to work with the Copyright Board of Canada to see if he can deal with his Maier trove under "orphan works" statutes. The law is designed to "help people in cases where the owner of copyrighted material is unlocatable."

The copyright board can determine a licence fee that the holder of copyrighted material would pay each time he sells some of that material. "So in my case – and this is just a complete guess – for every print I sold the fee might be $100," Mr. Bulger said Tuesday. This fee would then be directed to a not-for-profit organization with a mandate somehow related to the beliefs or work of the copyright holder.

The fee would be held in escrow for 10 years to allow a copyright holder to come forward. At the same time, the dealer acknowledged, "this case is not so much about there being an unlocatable heir as it is a question about who the heir is." To his mind, the Maloof-Goldstein deal with Sylvain Jaussaud seems the most sound.

Mr. Bulger said popular demand in the past year spurred his plans for the upcoming Maier exhibit. Yes, he'd like to be able to sell prints, but if not, he hopes they can be shown under terms of "personal use." 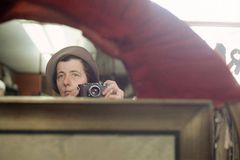 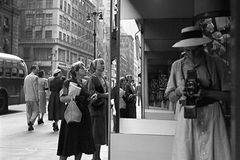 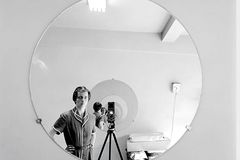