Elsie Wayne was not known for political correctness. The legendary Atlantic-Canadian politician used her direct, unapologetic and often outrageous ways to get things done, especially for her beloved Saint John, N.B.

Jean Charest, who served as one of only two Progressive Conservative members of Parliament, alongside Ms. Wayne, after the Liberal sweep in the 1993 federal election, described her as the "true people's representative."

He remembers one particular House of Commons confrontation that demonstrated everything she stood for. Following a Question Period session in the late 1990s, Ms. Wayne marched across the floor of the House to take her concerns about veterans' benefits for the merchant mariners directly to Jean Chrétien, who was then prime minister. A small group of the Second World War navy veterans looked on from the gallery above.

"She bolted up and just rushed across the aisle towards Mr. Chrétien," Mr. Charest told The Globe and Mail. "I remember her poking her finger into his shoulder saying, 'Listen to me, young man. Listen to me. You're going to have to help those young boys up there who sacrificed so much.' Going over, we were concerned that she'd get into trouble."

After years of pressure from advocates, including Ms. Wayne, the Canadian government recognized the 12,000 merchant mariners in 2000 and provided them with a $50-million compensation package.

Aside from veterans' issues, Ms. Wayne also cared deeply about Saint John, where she served as mayor from 1983 to 1993. It was just one chapter in her 27-year political career, which included a stint as interim leader of the federal Progressive Conservative Party.

"She had a very deep affection for the people of Saint John and I think that translated into the support she had," Mr. Charest said. "I think her legacy as a member of Parliament will be the memory of what we hope for in those who represent us, who are able to fight injustice with zeal and determination, to change what is wrong, as she did for the men in the merchant marine."

Elsie, as she was known, died peacefully in her sleep at her Hunter Lake, N.B., home on Tuesday. She was 84 years old and a devout Baptist.

Her son Stephen Wayne said she will be remembered for her honesty, in her political life as well as her personal life.

"I don't think they've made a more honest person – male or female – on the face of the Earth, which helped her politically," he said. "There was no hidden agenda with my mother. If she had something to say, she said it."

Ms. Wayne was born Elsie Eleanore Fairweather in Shediac, N.B., on April 20, 1932, the youngest of seven children. Her father, Paxton, was a mechanic and her mother, Ada (née Estabrooks), stayed at home with their five sons and two daughters.

Ms. Wayne attended Saint John High School and went on to work as a secretary for a local church.

Her political career started at the grassroots level. It was her involvement in community flood prevention in Glen Falls, N.B., where she was living at the time, that led her to run for the Saint John city council in 1977. She served as a councillor until 1983, when she was elected the city's first female mayor.

She worked tirelessly to promote the interests of Saint John, coining it "the greatest little city in the east." Ms. Wayne loved her community, especially its former American Hockey League team the Saint John Flames, for which she was a season ticket holder. Her devotion to the city made her one of its most popular mayors.

"They did a survey once on the 100 most popular people [in Saint John], and she tied Wayne Gretzky here," Stephen said.

Ms. Wayne did not publicly affiliate herself with a political party until she ran for the Progressive Conservatives in the 1993 federal election. Under Kim Campbell, the party suffered a devastating defeat, however, its parliamentary representation dropping from 156 seats to just two. Ms. Wayne and Mr. Charest were the only remaining PC MPs on Parliament Hill. With Mr. Charest travelling across Canada in an attempt to rebuild the party, Ms. Wayne led the charge in Ottawa.

"She certainly had not signed on for the hand she was dealt. It was like being in charge of a train wreck," Mr. Charest said. "I think of how lucky I was to have her as a partner as we undertook the rebuilding."

When Mr. Charest resigned the party's leadership in 1998, Ms. Wayne stepped in as interim leader for seven months before Joe Clark took over the post.

Ms. Wayne was a colourful character on the Hill – literally. She was known for wearing brightly hued sweaters, especially around Christmas time. Mr. Charest said one sweater was like "a whole holiday vacation wrapped into the top of her body, reindeer and all."

"She seemed to make this kind of an annual thing. The next year, she showed up at again the Liberals' Christmas party in a blue Santa suit. She had a knack for crashing parties," said Jeff Ferguson, who worked as Ms. Wayne's executive assistant in Ottawa from 1994 to 1999.

Ms. Wayne was also known for her straight-shooting attitude and socially conservative views, which sometimes landed her in the headlines. She openly opposed abortion and in 2003 said gay Canadians who want the right to marry should "shut up."

Although Mr. Charest said Ms. Wayne probably would have denied being a feminist, he thought of her as one. Her insistence on being treated equally made her a inspiration for women in politics, including Dorothy Shephard, member of New Brunswick's legislative assembly.

"Because she was a housewife who stood up for her community and then realized the power of speaking up and the power of escalating people to that call for action, she realized that she could make a difference on so many levels," Ms. Shephard said. "She showed all of us that it wasn't necessarily about … having to have the most expensive and expansive education in order to get things done."

When Ms. Wayne retired from politics in 2004, she moved back to New Brunswick to live with her husband, Richard Wayne, at the home he built on Hunter Lake. She was presented with the Minister of Veterans Affairs Commendation for her work on veterans' issues in 2008 and named an honorary gunner by the 3rd Field Regiment (The Loyal Company) in New Brunswick. She also has honorary doctorate degrees from the University of New Brunswick, in Saint John; St. Thomas University, in New Brunswick; and Husson College, in Maine.

Ms. Wayne had a stroke in 2009 and suffered from slight dementia before her death. She is survived by her husband, sons Daniel and Stephen Wayne, two grandchildren and one step-grandchild.

Mr. Ferguson, who will be a pallbearer at Ms. Wayne's funeral in Saint John on Saturday, said the one-of-a-kind "people's politician" can finally rest.

"She worked very hard and never ever took a break. She was always 24/7," Mr. Ferguson said. "She can put her feet up finally, take a break and rest in peace." 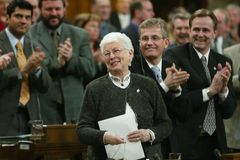