New Brunswickers will buy their legal marijuana at a subsidiary of the province's liquor commission – and have sommelier-like staff to guide them.

The province also announced Wednesday the stores will be more tightly controlled than liquor outlets, but home delivery will be available.

"No one under the legal age will be allowed inside the premises. That will happen at the reception area, after which people will be able to enter the retail environment," NB Liquor president Brian Harriman told a news conference.

"The product will be displayed under glass cases and it will be a one-on-one shopping experience ... We will ensure our retail staff are highly trained and able to educate and help people who want to learn about cannabis have that opportunity in the store environment."

"NB Liquor has the experience in the retail market selling a regulated substance, and we believe their knowledge and expertise will provide for a smooth transition into this new territory," she said.

The federal government is expected to legalize recreational marijuana starting in July 2018, although some provinces, territories and police agencies have lobbied for a delay. Federal Health Minister Ginette Petitpas Taylor has said the government is sticking to the deadline, and Rogers says that's the date New Brunswick is preparing for.

A tender was recently issued for 20 retail locations in 15 communities across the province.

Harriman said the retail locations will be separate from anywhere liquor is now sold. The number of employees has not been determined, but each will require a lot of product knowledge, he said.

Jamie Agnew, president of the CUPE local that represents about 500 NB Liquor employees, said staff will have to be trained much like sommeliers in liquor stores.

"People need to know about the CBDs and the THCs, sativa and indica. There's a lot of science around the marijuana now. Just as in wine and scotch, there's a tasting wheel," said Agnew, who currently uses medicinal marijuana himself.

Last month, Ontario announced it plans to set the minimum age at 19 and sell cannabis through government-run outlets.

Earlier this month, Alberta proposed to make 18 the minimum age to use cannabis, with no decision yet on whether to sell cannabis through government-run stores or through private operators. The Nova Scotia government is seeking feedback on a legal age of 19 for marijuana use, with sales through a Crown corporation like the Nova Scotia Liquor Corporation.

Ross Wetmore, a critic for the Opposition Progressive Conservatives in New Brunswick, said his party would have preferred a private retail model, but will reserve further comment until they see all the details.

The minimum age to buy recreational marijuana, pricing, the name of the new stores, and the kind of education programs have yet to be determined.

Wetmore said many of those things should already be decided.

"We should have been starting our education right now. We are behind on that. Law enforcement has some concerns. We have a lot of questions to ask of the minister," Wetmore said.

Harriman said online sales will also be available for pick-up at a retail store or home delivery.

He said it has not been determined who will do the home delivery, but it will require the same kind of identification and age verification at the door that's now in place for delivery of medicinal marijuana.

Both Rogers and Harriman say the goal is to get recreational cannabis out of the hands of young people and criminals.

Harriman said the experience in other places such as Colorado has been that the illegal market is reduced significantly once sales are controlled and legalized.

Rogers said illegal dispensaries will remain illegal, and an issue for public safety officials to deal with.

Richmond, B.C., pushes back against sale of legal cannabis
October 24, 2017 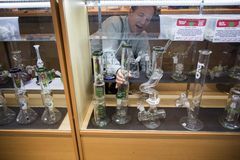