The emphasis was on history, but the message was clear: the Arctic is Canada's park and HMS Erebus its playground.

Parks Canada live streamed an underwater exploration of the Erebus wreck in Nunavut Thursday at the Royal Ontario Museum in Toronto.

President of the Treasury Tony Clement called the discovery of HMS Erebus – one of two ships from the ill-fated 19th century Franklin expedition last September – a "swashbuckling tale of mystery."

Attending on behalf of Minister of the Environment Leona Aglukkaq, Mr. Clement addressed a room containing members of the media and around 20 school children attending as part of a special underwater archaeology program.

"Daring courage and endurance," Mr. Clement told the schoolchildren, "are not limited to the past."

Parks Canada underwater archaeologists received help from the Joint Task Force North of the Canadian Armed Forces as part of Operation Nunalivut – a sovereignty operation conducted annually in the North since 2007 – in cutting ice and setting up a heated tent three metres above the shipwreck.

"I don't think we're going to find a Russian flag on the Erebus so I think it underscores our point – in all seriousness – that the British, and of course, we inherited from the British, Canada's Far North," Mr. Clement told reporters after the event.

"This is something that underscores visibly and tangibly the type of exploration that has gone there over the decades."

Mr. Harris revealed two new discoveries made by the Parks Canada team over the past few days: Draft markers with the Roman numerals XX written on the stern; and reinforced metal on the upper deck of the ship.

Audience members also got murky underwater glimpses of the rudder, mast and cannons on the ship. A thick coating of aquatic life has taken over the surface of the wreckage.

There was no footage shown from inside the ship.

"We haven't started to dig deep," said Mr. Bernier, adding that "archaeological measures" have to be in place before entering the wreck.

The team spent the past few days clearing the wreckage. They lifted the wreck and installed a chandelier lighting system underneath to better illuminate the area.

Mr. Bernier added the team hopes to install video cameras inside the wreck over the next two days, if weather permits.

Being engulfed by ice has kept the wreckage in good condition, said Mr. Bernier.

The crew members of HMS Erebus and HMS Terror perished in 1848 after their vessels were believed to have gotten stuck in the thick ice of the Northwest Passage.

Inuit lore helped Parks Canada locate the HMS Erebus in the southern portion of the Queen Maude Gulf in Nunavat. Inuit accounts hint that the wreckage of the HMS Terror is located west of King William Island, which is where Mr. Bernier said Parks Canada will concentrate their HMS Terror search efforts in September.

The discovery of HMS Erebus last year is a touchstone for the Conservative government's Arctic sovereignty agenda. Ms. Aglukkaq unveiled a bell recovered from the deck of the Erebus wreckage last November, calling the Franklin expedition a "founding block of Canada's sovereignty in the Arctic."

A detailed replica of the bell made with 3-D printing technology now sits on display at the Royal Ontario Museum.

Critics of the Conservative government disagree with the historical provenance of the ship.

"I think Stephen Harper is full of it," said Arctic Institute of North America research associate Bill Barr. "This is not Canadian heritage, its British heritage."

He added that Prime Minister Stephen Harper is neglecting history by not recognizing the HMS Erebus was a British naval vessel, not Canadian.

"This is important for our understanding of ourselves, the people that came before us, the relationship between Inuit peoples and other Canadians as well," Mr. Clement said defending spending money on Artic exploration during a time of financial restraints.

Parks Canada did not reveal how much the exploration cost. 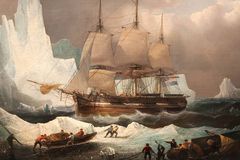 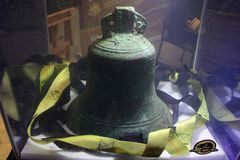