A chorus of disapproval from the Canadian music industry has arisen over additional charges attached to the country's temporary foreign workers program.

Employment, Social Development and Multiculturalism Minister Jason Kenney earlier this month announced a new application fee of $275 per musician will be levied on booking agents and small venues that import acts to Canada. It is believed that the levy is substantial enough to keep some international artists from touring here.

"Everybody in the music club business is having a really hard time making this work," said Mike Campbell, owner of the Carleton Music Bar & Grill in Halifax. "To have anything that affects the bottom line is just another punch in the throat."

Shawn Creamer, co-owner of Toronto's Dakota Tavern, was walloped by the news of the new fee. Although the roots-music acts he books at the popular basement establishment are mostly Canadian, Mr. Creamer occasionally brings in U.S. artists, such as Chip Taylor, who wrote the hits Wild Thing and Angel of the Morning. "I can't do it now," he says. "I can't recoup the costs."

After the Calgary Herald published a story this week on the fee, an online petition was created by part-time promoter Carlyle Doherty, who wrote that the extra cost would "inevitably cripple small music venues and small business talent buyers." The petition attracted more than 75,000 signatures within two days.

The issue quickly became politicized, with Canadian musicians chiming in. "Please tell me this is some gross misunderstanding," tweeted Amy Millan, singer for the Juno-nominated indie-pop troupe Stars, "or does [Prime Minister Stephen] Harper just continue to destroy art in this country."

There has been considerable confusion over the matter. The new fee is attached to a labour market opinion (LMO) application required of any Canadian business that hires international workers. The LMO requirement is not specific to the music business, and it is not new. It carries a $150 processing fee for the work permit required for each musician and crew member.

But where the work permit was a one-time charge, the new $275 fee (levied, according to the government, to ensure that Canadians are given the first chance at available jobs) is applied for each contracted engagement. If a band were to book its own gigs separately with each club owner, the costs would be prohibitive. Under the new regulation, for a quartet to play five shows in Canada, the total payout would rise from $450 (the maximum for any one band) to $1,550.

However, music festivals, large venues and any club dedicated to music are exempt from having to apply for work permits. Bands and artists playing Vancouver's Rogers Centre or Toronto's Horseshoe Tavern or the Edmonton Folk Festival or Montreal's Metropolis would not be affected by the new fee.

As well, because of a cultural exchange program between Canada and the United States, a labour market opinion is not required for members of the U.S. and Canadian components of the American Federation of Musicians, so they are exempt too. (Union dues range from $150 to $275 annually in North America.)

Which means that only non-AFM members who play restaurants and bars are subject to the new arrangement. And even then, if those international artists are being booked by one promoter or one booking agent to play at several non-exempt venues across Canada, they are only required to pay the LMO fee once. In such cases the agent (not the venue) would be the employer. It would seen as a single hiring.

Because of the many exemptions, some Canadian promoters are playing down the potential impact of the new fee.

"It's business as usual here," says Dan Burke, a veteran Toronto promoter, who notes that most touring artists from the United States play LMO-exempt venues here.

In response to the furor over the new fees, the government has noted that the new system only levels the playing field.

"For a Canadian band to enter the U.S., the paper work is burdensome, there is a substantial fee, and some of the visas have numerical caps," explained Alexandra Fortier of the Office of the Minister of Employment and Social Development. "So, Canada's system is still quite fair and generous."

Still, some think the fee sends the wrong message, exemptions or not. Michelle Cable of Panache Booking in the United States believes protectionism is wrong.

"It's not about taking jobs from Canadian musicians. It should be about bringing other culture into the country and being receptive to that idea. The stricter it becomes to cross borders, it is sending a message that, 'We don't want you here.'" 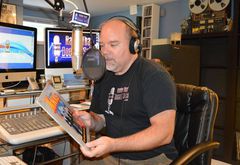