Residents in Newfoundland and Labrador spent Sunday taking stock of the damage caused by a fearsome windstorm that roared through the province a day earlier.

Utility crews worked around the clock over the weekend to restore power to the tens of thousands of customers who were left without electricity.

Newfoundland Power said 8,600 customers were without electricity Sunday evening, down from 20,000 earlier in the day. The utility said more than 60,000 of the 70,000 customers affected by Saturday's outages were back on the grid, but some residents may be without power until Monday.

Prime Minister Justin Trudeau tweeted a "salute" to the crews for their efforts. "Wishing everyone in the province a quick (and) safe recovery," he wrote Sunday.

St. John's resident Phonse Fagan said he slept fully clothed under six blankets to stay warm after the heat and lights went out at his house Saturday afternoon. A shrieking gale had been picking up speed for the previous two hours when the power failed, he said as he sat Sunday reading in a warming centre at St. John's City Hall.

"I was doing a few chores around the house and I just noticed the sound was very unusual," he said. "The sound of the wind was just roaring through the whole neighbourhood," he said.

Fagan said there was flying debris from split trees.

"I've been talking to people who said siding was blown off their houses," he added

Around St. John's, damage was evident Sunday as a lengthy cleanup began. Slate tiles from a downtown church were blown into an alley 100 metres away, roofs were partly off several houses and buildings and a home in nearby Torbay had its top floor blown off.

"It was very powerful," he said of the storm that knocked out hydro to his house in Mount Pearl for several hours.

Goulding said the damage may not be on par with hurricane Igor in September 2010, which brought torrents of rain over much of southeastern Newfoundland. Still, he said, it was a reminder of nature's power.

"I was out briefly yesterday doing some personal chores and I had great difficulty standing up," he said of trying to walk in the blasts of wind. "It's something you really had to experience to imagine what was happening."

St. John's Coun. Danny Breen, chair of the public works committee, said traffic may be "tangly" as the city tries to replace about 142 traffic lights claimed by the gales. Breen said about 72 intersections have become de facto four-way stops, which could cause jams when the Tim Hortons Brier curling tournament lets out Sunday evening.

"Give us time to get this fixed up, because it can be very messy if people are impatient," said Breen. "Everybody's just got to slow down. You're going to have to adjust your driving routine ... for a little while."

Municipal and provincial government offices plan to stagger their openings to ease the flow of rush-hour traffic Monday, said Breen. He said he doesn't know how long it will take for the city to purchase new traffic lights, each costing about $1,000, in addition to the 40 it has on hand.

Breen said the city has been too focused on the recovery effort to consider asking for provincial funds.

A meteorologist with Environment Canada said Sunday that the worst of the hurricane-force gusts, which broke records in some areas, has passed.

"Wind speeds are definitely down, so in that regard, it's not as dangerous anymore," Tabea Fiechter said in an interview. "It's just the cleanup after the storm now."

Fiechter said between 140 km/h and 160 km/h winds blew through much of province Saturday, gusting to 180 km/h on the Avalon peninsula.

Blizzard warnings are still in effect for parts of eastern Labrador and the west shore of Newfoundland. Fiechter said she expects winds to die down to about 40 to 60 km/h Sunday as the storm peters out.

"That's nothing unusual for Newfoundland, really."

Police said drivers are returning to the roads after some intersections were shut down Saturday due to hazards posed by downed poles and live wires. Sgt. Robert Baldwin of The Royal Newfoundland Constabulary said several cars were damaged during Saturday's blustery weather and motorists should be on the lookout for blowing debris.

"It was kind of extraordinary circumstances," said Baldwin. "It's slowly but surely getting back to normal, but still a lot of caution has to be used when we're out driving."

Premier Dwight Ball has advised communities to check with insurance companies to fully understand policies and coverage in dealing with storm damage. 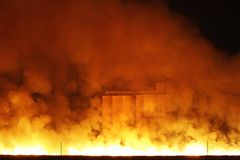 Two dead, others stranded as powerful storm slams California
February 17, 2017
Report an error
Due to technical reasons, we have temporarily removed commenting from our articles. We hope to have this fixed soon. Thank you for your patience. If you are looking to give feedback on our new site, please send it along to feedback@globeandmail.com. If you want to write a letter to the editor, please forward to letters@globeandmail.com.
Comments