For three families of Syrian refugees, their introduction to Canada begins in a small room filled with folding chairs on the second floor of an industrial building north of Toronto. After a lunch of pizza and Tim Hortons doughnuts, they are briefed on the basics: health cards and social insurance numbers, the steps to get a driver's licence, bank accounts that don't have service fees and how to decipher their new home's currency.

"One dollar is a loonie. Two dollars is a toonie. Twenty-five cents is a quarter. Try to get familiar with this," says Dawood Ahmad, the head of resettlement services for Humanity First, the charity that is sponsoring the session and has helped to bring 1,200 refugees to Canada in the past four years. An hour earlier, new arrivals from Sri Lanka received the same information, but without TV cameras or reporters.

As the new Syrian arrivals take in the mundane details of Canadian life like so many refugees before them, there are signs of the emotional toll of the past few years. There is also evidence of the network of support that is ready to help, the sponsors who have brought them here, the volunteers on hand to translate. With as many as 25,000 refugees expected in the coming months, this is a scene that will play out again and again across Canada.

This Sunday afternoon session is a primer for their life to come, but also, it turns out, a reunion of old friends. All three families, along with another man who has come to greet them, are from the Syrian city of Homs, but some have not seen each other for three to five years. Fleeing the country's conflict, they scattered to Egypt, Turkey and Lebanon. On this grey December day, they meet again. There are hugs and kisses on cheeks. Parents and children soon scatter to join old and new-found friends.

Rakan Almasri, his wife, Houda, and their five children arrived in Canada on Nov. 30, after a year and a half in Turkey, and have spent the days since becoming familiar with their new home – a house in the town of Maple, north of Toronto.

"This country is busy," says Mr. Almasri, an engineer who worked on power stations, remarking on the traffic, especially at rush hour.

As he talks, his wife reminds him in Arabic of another event that has taken them by surprise. "Tomorrow," she says, her face lighting up with a wide smile.

With the move, he explains, they almost forgot that Monday will be their 20th wedding anniversary. It will be strange, Mr. Almasri says, to mark the occasion so far from home and family. "Anyway, we are in a safe place now," he says.

Mr. Almasri talks of his hopes for his children – three sons and two daughters who range in age from nine to 19. He and his wife, a teacher, want to be active members of society, he says, and integrate as soon as possible.

In a nearby hallway, Akram Aljbuoli embraces a man in a grey suit and tie, the two reunited after years. Mr. Aljbuoli, who arrived in October, lives north of Toronto with his wife and two daughters. His eyes well up as he talks of the family he has left behind, a mother and a brother who is disabled after a bomb blast. Another brother was murdered in Syria, he said.

Through a translator, Mr. Aljbuoli says he has found work at an auto-parts plant, thanks to a friend. He is relying on a ride to get to his job, but he hopes to begin work on getting an Ontario driver's licence soon.

The man in the suit, Mazen Khabbaz, is the newest arrival of this group. He and his brother landed in Toronto with their families on Wednesday from Egypt. They are staying in Milton, Ont., west of Toronto, the house guests of two members of the group that sponsored them.

"I don't look like a refugee," he jokes through a translator. In Syria, he made and installed doors, windows and cabinets, he says. Like the others, he says his children's future is the main reason he has come to Canada.

Aslan Daud, the chairman of the Canadian branch of Humanity First, says so far this year, the organization has helped sponsor 60 refugees from Syria and expects to welcome as many as 240 more next year, as families who arrive contact others and encourage them to follow. 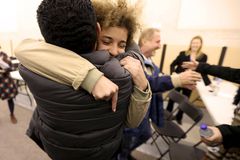