No criminal charges will be laid against five so-called "Proud Boys" who disrupted a Mi'kmaq ceremony in downtown Halifax on Canada Day, the Royal Canadian Navy says.

Rear-Admiral John Newton said Thursday that an investigation has wrapped up with no further actions taken against the servicemen, although they remain on an unspecified term of probation and must adhere to unspecified conditions.

"If they fail, they are gone. This is not lightweight punishment," he told reporters.

Elizabeth Renzetti: Proud Boys toss around the shade in the Summer of White Male Grievance

Opinion: Langevin, Ryerson, Cornwallis: Is our past unfit for the present?

The servicemen had been relieved of their duties and re-assigned to other jobs, pending the results of the military police investigation into the incident at a statue of Halifax's controversial founder, Edward Cornwallis.

Newton said one of the servicemen has since left the Forces, but the others are being returned to their operational units and regular duties. He said the serviceman who left the forces had initiated the process well before the July 1 incident.

He said the members displayed "behaviour inconsistent with the values and ethics expected of those in uniform," and the military has taken appropriate measures to address "individual shortcomings."

Specifically, Newton said they had contravened a section of the Queens Regulations and Orders "where your personal actions, on duty or off duty, could be perceived or are in contravention with the policies of the Canadian Armed Forces."

The navy has ensured the servicemen have a clear understanding of the expected ethical behaviours and standards of conduct within the Armed Forces, he said.

Newton told reporters the remaining servicemen — three navy and one army — will have a permanent mark on their record.

"They have to actually pass this probationary period to get back onto their full career progress," he said.

"I'm not going to spell out the individual type of probationary measures because there is privacy and confidentiality of the members involved and they have that right as individual citizens," said Newton.

The investigation began in early July, a few days after a group of "Proud Boys" confronted Indigenous people gathered in a park for what they described as a sacred rite. The incident was caught on videotape and spread on social media.

Rebecca Thomas, who was at the Canada Day ceremony, said she was disappointed at the "lack of consequences" for the service members who were involved in the incident.

"I would have liked to have seen a restorative justice process for these individuals where they have to face the community that they wronged," said Thomas, who is Mi'kmaq and Halifax's poet laureate.

"I worry about something that could have been a teachable moment is now just turning into a straight form of punishment within a very familiar context. It doesn't seem that things were learned."

Thomas wonders whether the punishment would have been as lenient had the service members interrupted a Roman Catholic mass or a Remembrance Day ceremony.

"It could be an indication on how the Armed Forces see Indigenous ceremony," she said. "I would like to hope that these individuals have changed their feelings on Indigenous peoples but I don't have any proof to that effect."

The Armed Forces previously apologized for the servicemen's actions. Defence Minister Harjit Sajjan and Gen. Jonathan Vance, chief of the defence staff, both condemned the actions of the men.

The "Proud Boys" — known for matching black polo shirts often worn by members — was founded in the U.S. by Gavin McInnes, a Canadian who helped establish Vice Media and is now an outspoken, right-wing political pundit.

A Facebook post from the Proud Boys Canadian Chapters Thursday struck a triumphal and defiant tone in reaction to the navy's actions.

"We win, our brothers in the Halifax 5 are returning to active military duty with no charges, let the SJW (Social Justice Warriors) tears pour," it said. "Proud of our boys."

Newton said he has met with the servicemen twice, and they are remorseful and dealing with a world changed by social media.

He said reporters don't know the servicemen's version of the story, but "it means nothing" anyway, because what matters is what the public perceives.

Newton said he has dealt with many navy mishaps caused by personal mistakes, and although the servicemen embarrassed the military, the matter has been dealt with through the governing policies and procedures.

"You cannot just turn around and fire everybody. They have rights," he said.

"You can't pursue it just because you want to. You just can't. What we are doing doesn't solve all of the issues. But it is as good an outcome as I can strive for."

Newton said he has also met with Chief Grizzly Mamma, who was part of the Indigenous ceremony interrupted by the "Proud Boys."

In a statement Thursday, the military said the Halifax incident has provided a leadership opportunity for military brass — and the best way to confront and defeat intolerance is through education and training.

"Any action by a Canadian Armed Forces member (in uniform or not) that demonstrates intolerance or shows disrespect towards the people and cultures we value in Canada is completely unacceptable," it said.

"The Canadian Armed Forces celebrates the contributions that First Nations, Inuit and Metis people have made to Canada and its military.

"The chain of command has taken appropriate measures to address individual shortcomings, intended to drive home a clear understanding of the ethical behaviour and standard of conduct that we demand all our members uphold and maintain."

It said the Armed Forces view diversity as a source of strength and flexibility. 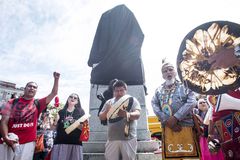 Chief Perry Bellegarde opens AFN meeting with plea to end racism, violence
July 25, 2017
Halifax covers controversial Cornwallis statue in response to protests
July 15, 2017
Report an error
Due to technical reasons, we have temporarily removed commenting from our articles. We hope to have this fixed soon. Thank you for your patience. If you are looking to give feedback on our new site, please send it along to feedback@globeandmail.com. If you want to write a letter to the editor, please forward to letters@globeandmail.com.
Comments