A Mi'kmaq spiritual leader who fought fiercely to protect his culture and history, Noel Knockwood helped to restore his people's sense of pride and in the process brought about changes to Nova Scotia's legal and education systems.

Often speaking of the "cultural genocide" of the residential school system, Mr. Knockwood, who spent several of his childhood years at the Shubenacadie Residential School, successfully lobbied the government to change the Solemnization of Marriage Act so that traditional Mi'kmaq marriages would be legal under provincial law. Mr. Knockwood, who performed weddings, believed that having elders officiate at these Mi'kmaq ceremonies could help revive traditions that were suppressed during European colonization.

"We can now stand parallel with the Muslims, Christians and other religions throughout the world," Mr. Knockwood said in 2001.

He was also part of the Eagle Feather Project, which led to the acceptance of natives using the sacred eagle feather, instead of the Bible, in Nova Scotia's courts.

"Noel persuaded a lot of the Mi'kmaq that their religion is great and it should be practised," said Daniel Paul, a historian, author and lifelong friend.

Appointed to the Grand Council, the Mi'kmaq traditional senior level of government, Mr. Knockwood became a spiritual leader and a popular guest lecturer at universities, high schools and countless other venues. While he worked for decades to restore Mi'kmaq culture and spirituality, he was equally passionate about cross-cultural understanding, human rights and education. He helped to establish post-secondary education transition programs for native students at Dalhousie University and also served as an adviser on native affairs to Correctional Service Canada. At prisons in Nova Scotia and New Brunswick, he held sweat lodges and taught life prisoners how to hold their own ceremonies.

"He gave the same message to all," his sister Isabelle Knockwood said. "His message was peace."

Born in 1932 on the Shubenacadie Indian Reserve (as it was then called), about 60 kilometres northeast of Halifax, Mr. Knockwood was the youngest of five children born to Teresa Simon and John Knockwood, who never attended school but taught himself to read and write by reading the Halifax newspaper from cover to cover every week.

Noel's early life was semi-nomadic. With his family, he would travel to different parts of the province depending on the hunting and fishing seasons. His sister Isabelle remembers elders gathering at their home and telling stories. "One of the principal ways of teaching young children was through the telling of legends that embodied thousands of years of experience in living off the land," Ms. Knockwood wrote in her 2001 book Out of the Depths: The Experiences of the Mi'kmaw Children at the Indian Residential School at Shubenacadie, Nova Scotia.

"Even the plants are said to have a spirit and are our relations. When we have our sacred ceremonies, like the sweat lodge, we end it by saying, Msit no'kmaq, which means, "all my relations."

For the Knockwood family, life on the reserve during the Depression was hard. Homes were little more than tar-paper shacks with no running water, indoor plumbing or electricity. Families were on strict government rations that included salt pork, flour and tea. "Not too damn much," Mr. Paul said.

Like his siblings, Noel was sent to live at the Shubenacadie Indian Residential School. The big red brick building was an eight-kilometre walk from his home. Later in life, he was part of a class-action lawsuit that won compensation for survivors of the residential school.

"Those who ran the school tried to rob us of our collective identity by punishing us for speaking our language, calling us 'savages' and 'heathens,'" Ms. Knockwood wrote in her book. "Despite the efforts of those who ran the school to instill hatred and contempt for native traditions and culture, many of us have returned to a traditional path as the source of our strength. … Some of us have come to realize that we were abused not only physically but spiritually. For us, the native way with its sacred circle and respect for all living things is a means of healing that abuse."

Mr. Knockwood later credited his spirituality for helping him overcome his long battle with alcoholism. He had been sober for decades and used his personal struggle with addiction to help others.

In the early 1950s, Mr. Knockwood volunteered for military service and served 413 days in combat during the Korean War. In 2001, when the National Aboriginal Veterans Monument was unveiled in Ottawa, Mr. Knockwood performed the opening sacred prayer.

Having only completed Grade 8, Mr. Knockwood yearned to further his education. He went to university and studied comparative religions, eventually earning a bachelor of arts degree from Saint Mary's University and a diploma from the Coady International Institute at St. Francis Xavier University.

Inspired by the civil rights movement, his university studies and the teachings of elders, Mr. Knockwood travelled out west in the 1970s to spend time in Cree and Blackfoot communities. He witnessed them practising their culture and spirituality and envisioned the same for his own community.

"He came back with a reinstilled pride with being an Indian," said Stephen Augustine, principal of Unama'ki College at Cape Breton University. "The Mi'kmaq had pretty well lost their traditions."

Mr. Knockwood encouraged Albert Lightning, a Cree elder and well-known spiritual leader in Alberta, to visit the Maritimes. No only did Mr. Lightning make the trip, he also transported a nine-metre high teepee on the train from the Stoney Reserve in Alberta. When the teepee arrived, they set it up in a provincial park and held a powwow, the first to be held in the region in a long time. It was one of the first public steps toward reintroducing native spirituality in the Maritimes since the residential school system and the government's attempts to assimilate natives into white culture. While Mr. Knockwood's efforts met with some skepticism within the Mi'kmaq community, he persevered with his work.

Although he was asked, Mr. Knockwood chose not enter band politics. "He was more interested in trying to change the attitudes of society," Mr. Paul said. "He became one of the major spokesmen for the Mi'kmaq people."

In 2000, Mr. Knockwood became the Nova Scotia legislature's first aboriginal sergeant-at-arms and served in that position for five years. "He demonstrated to everyone that a Mi'kmaq could do [the job] just as well as a white person," Mr. Paul said. For his dedication to Mi'kmaq heritage and spirituality, he received a National Aboriginal Achievement Award in 2002.

"He was trying to instill a sense of pride in our [Mi'kmaq] roots and he did a fine job of it," Mr. Augustine said. "He always had a smile on his face. He was always searching for answers."

Mr. Knockwood died on April 10 at the Colchester East Hants Health Centre in Truro, N.S., after suffering a stroke. He was 81. He leaves his children Vera, Raymond, Pius, Edna, Gabriel, Basil, Anna, Christine, Amsodaqun; his partner, Iretia Cox; Mary Susan Knockwood, the mother of six of his children; his sisters Rose and Isabelle; 20 grandchildren; five great grandchildren; and several nieces and nephews. 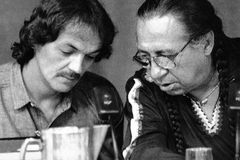 Activist fought for victim compensation
January 3, 2008
Follow us on Twitter @globeandmail Opens in a new window
Report an error Editorial code of conduct
Due to technical reasons, we have temporarily removed commenting from our articles. We hope to have this fixed soon. Thank you for your patience. If you are looking to give feedback on our new site, please send it along to feedback@globeandmail.com. If you want to write a letter to the editor, please forward to letters@globeandmail.com.
Comments