Five days ago, Lionel Desmond and his extended family celebrated New Year's Eve with a lobster feast and an evening of chatter, laughter and acoustic guitar at a family member's cabin. Mr. Desmond, an Afghanistan war veteran coping with post-traumatic stress disorder, arrived at the gathering with his wife, Shanna Desmond, and their 10-year-old daughter, Aaliyah, after an afternoon of horseback riding.

All seemed well with the family that night. "He was talking and carrying on, but when someone is sick in the brain, you don't know when someone is going to snap," said Catherine Hartling, Ms. Desmond's aunt, who lives across the road from the Desmond family in Upper Big Tracadie in northeastern Nova Scotia. "That was the last time I seen any of their faces."

Early Tuesday evening, Mr. Desmond's sister, Chantel, and her boyfriend dropped by the family home to say hello. They found Mr. Desmond dead on the floor. Farther inside, three more bodies lay slain – that of his wife, daughter and 52-year-old mother, Brenda Desmond, who was visiting for the holidays.

Read more: Living with PTSD: How one of Canada's first troops in Afghanistan learned to take control

Also: Where to get mental-health help in Canada

The Nova Scotia RCMP suspect the two women, the child and Mr. Desmond were killed by gunshots, but only Mr. Desmond's wounds appeared to be self-inflicted. There were no signs of a break-in.

The apparent murder-suicide has rocked the small community, where several members of the family live, and rattled the country's military members and veterans. The tragedy is raising questions about the mental-health care and support provided to Mr. Desmond after he returned from the Afghanistan war in the summer of 2007 and after the corporal was released from the Canadian Forces only 18 months ago.

Mr. Desmond is among at least 72 soldiers and veterans who have killed themselves after serving on the perilous Afghanistan mission, an ongoing Globe and Mail investigation has found. Most have only taken their own lives, but just before Christmas in 2015, Robert Giblin, a veteran of two Afghanistan tours, repeatedly stabbed his wife, Precious Charbonneau, before they fell from a high-rise apartment in Toronto. In an obituary, Mr. Giblin's family said he suffered with PTSD, but had received treatment and was putting "the pieces of his life together."

Neither the Canadian Forces nor Veterans Affairs is involved in the Upper Big Tracadie police investigation. Inspector Lynn Young of the RCMP said two firearms were found inside the home. The cause of the deaths will be confirmed by the medical examiner.

"This is incredibly tragic for everyone involved," she said Wednesday at a media conference.

Spokespeople for Canadian Forces and Veterans Affairs said they could not discuss Mr. Desmond's medical condition or treatment due to privacy reasons. Ms. Hartling said about a year ago, after an "incident" with his wife, Mr. Desmond was sent to Montreal for psychiatric treatment and was on medication to treat PTSD. She said he was also banned from owning firearms.

"The poor guy needed help and they sent him up to Montreal and put a little Band-Aid on him and sent him back," Ms. Hartling said. "As soon as he got his pension, it seemed like they walked away from him. They just wanted to cover themselves."

Ms. Hartling said this tragedy should seize the attention of Prime Minister Justin Trudeau. Rev. Elaine Walcott, a relative and multifaith chaplain in Halifax, said Mr. Desmond went to St. Martha's Regional Hospital in Antigonish just last week, but was told a bed was not available. The provincial health authority said it could not comment due to privacy legislation.

"I do not want the military to believe there is no further obligation to address," Ms. Walcott said. "The vibrations of PTSD will be felt in the community for years to come."

Mr. Desmond's wife, Shanna, had recently graduated from nursing school at St. Francis Xavier University and had been working since the spring as a float nurse at St. Martha's Regional Hospital.

One colleague, who didn't want her name published, said Ms. Desmond was a devoted nurse and would drive in treacherous weather to make it to her shift. She recently mentioned her husband's PTSD to the colleague when the two health-care workers were attending to a patient suffering from the disorder.

"She was very empathetic with that situation because she knew how difficult [it was] and how that touched her own family," the co-worker said.

Another colleague, Mindy Diggins, said Ms. Desmond felt proud to be a nurse and had bright hopes for her future. Ms. Diggins last heard from her Tuesday at 1 p.m. – five hours before she was found dead. Ms. Desmond had wished her a happy birthday on Facebook.

Veterans' advocates are calling for answers from the Canadian Forces and Veterans Affairs. Former soldiers Michael Blais and Aaron Bedard, both members of a mental-health advisory committee struck by Veterans Affairs Minister Kent Hehr, believe reviews of veterans' suicides should be mandatory.

Because Mr. Desmond was no longer in the army, the Forces will not hold a board of inquiry into his death to determine what contributed to his actions and whether he received sufficient care – as it does in the suicides of active-duty members. Veterans Affairs, meanwhile, does not conduct inquiries into the deaths of former soldiers, nor does it routinely examine veterans' suicides to determine whether there are lessons to help prevent further tragedies.

"I have been terrified that this would happen for a number of years now," Mr. Blais said of the Desmond family tragedy.

Mr. Bedard added: "We need answers. What kind of support was he getting?"

Ms. Hartling said Mr. Desmond was known for chopping wood and shovelling snow for his neighbours. Before he was discharged from the military in July, 2015, Mr. Desmond, an infantry soldier with the 2nd Battalion of the Royal Canadian Regiment in Gagetown, N.B., spent about a year in a casualty support unit created during the Afghanistan mission.

Known as the Joint Personnel Support Unit, the JPSU is supposed to help military members return to work or smooth their transition out of the Forces by assisting them with paperwork and benefits and helping to ensure they don't face gaps in care. The JPSU, however, which has been under review by military brass for more than a year, has long lacked adequate staffing and resources.

Retired sergeant-major Barry Westholm, who quit the Eastern Ontario JPSU and the Forces in 2013 because of the chronic problems, said fixes to the JPSU are taking too long. The military "did not properly prepare for the PTSD wave," he said. "It's been window dressing."

A recent Globe investigation that examined 31 of the 72 suicides of Afghanistan war veterans showed eight had spent time in the JPSU. On Nov. 12, a ninth soldier whose last post was at the JPSU killed himself, The Globe confirmed. Mr. Desmond's death raises the JPSU suicide toll to at least 10.

The Canadian Forces said Mr. Desmond joined the military in 2004 and deployed to Afghanistan from January, 2007, to August of that year. The Afghanistan mission was his only overseas tour.

"This is a terrible tragedy and our thoughts are with the family and friends of the deceased," a Veterans Affairs spokesman said. "We are working hard to ensure that each and every time a veteran comes forward with a mental-health concern, they receive the support they need."

Veteran Trevor Bungay served with Mr. Desmond in Afghanistan during an intense tour of fighting. Mr. Bungay, a master corporal then, was second in command of their section. He said Mr. Desmond was "the perfect soldier."

"He was one of those go-to guys," Mr. Bungay recollected. "He wouldn't say no to anything and he always had a smile on his face."

The pair talked now and then about PTSD, a shared diagnosis. "What we had to do over there, people don't understand," Mr. Bungay said. He was shocked to hear of the apparent murder-suicide.

"No matter what happened," he added, "Lionel Desmond was not a monster. He had a big heart and loved his family."

The boyfriend said he had called 911 and was told not to let anyone in, Hartling said.

Deputy warden Sheila Pelly of the Municipality of the District of Guysborough said the deaths have stunned the community, adding that she knew the people but did not want to comment.

"Everybody's in shock," she said. "They can't believe it."

One Canadian Afghanistan war veteran’s experience with the transition to civilian life
November 10, 2016 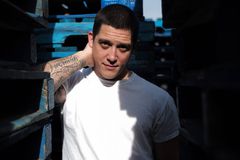 Remembering 31 Canadian Afghanistan war veterans lost to suicide
November 3, 2016
PTSD top diagnosis for troops at risk of being forced from military: records
December 14, 2016
Follow Renata D’Aliesio on Twitter @renatadaliesio
Report an error Editorial code of conduct
Due to technical reasons, we have temporarily removed commenting from our articles. We hope to have this fixed soon. Thank you for your patience. If you are looking to give feedback on our new site, please send it along to feedback@globeandmail.com. If you want to write a letter to the editor, please forward to letters@globeandmail.com.
Comments