The party's over in Inverness, Nova Scotia. The contest that clogged its streets and buildings with visitors from near and far, bringing thousands together under a spell of fiddle-playing and a dream of getting rich, the game that led municipal leaders to set up a temporary cellphone tower to accommodate the once-a-week surge in digital activity, is done. It might never happen again.

Every Saturday for nearly a year, the town of 1,500 on Cape Breton's west coast has played host to a lottery fundraiser called Chase the Ace. A game of chance in which the jackpot grows as long as the ace of spades remains unpicked from a deck of cards, the pot had ballooned to nearly $1.78-million this past Saturday when it was finally won by retired puffin-boat tour operator Donelda MacAskill.

Beyond Ms. MacAskill's luck, which is the stuff of any lottery, what happened in Inverness is really the story of how a tiny local branch of the Royal Canadian Legion stumbled upon a fundraiser that will net it hundreds of thousands of dollars – and how a tiny town became the magnet for thousands of Atlantic Canadians weekend after weekend. Under contest rules, you had to be in Inverness to win.

"There's a saying going around here," said Alec O'Neill, whose family owns the Village Grill in the town, a short drive from the region's acclaimed Cabot Cliffs golf course. "'The golf course spent $500-million to put us on the map. And the legion just bought a deck of cards.'"

Of course, it wasn't that simple. It began, says the contest's chief organizer, Cameron MacQuarrie, at a biennial meeting of the Royal Canadian Legion in Nova Scotia, whose provincial command is shared with Nunavut. Members were discussing fundraising ideas last year and someone mentioned a lottery game called Chase the Ace that they believed originated in the northern territory. A local legion in Hants County, N.S., gave it a try and generated a jackpot of $300,000, said Mr. MacQuarrie, vice-president of legion branch 132 in Inverness.

His branch offered to try the contest too, despite warnings that the work involved could be considerable. As long as the ace of spades isn't picked, the contest continues, potentially for up to 52 weeks as each card chosen is removed from the deck.

The game works in this way, like a 50-50 draw: Participants buy a numbered ticket. The holder of the ticket that wins the weekly draw gets a 20 per cent cut of that week's ticket sales and a chance to pick the ace. If the ace is chosen, the picker wins the jackpot and the contest ends. If it isn't chosen, 30 per cent of ticket sales are piled in to form the next jackpot. The other 50 per cent of sales go to the charities. At Inverness, $20 bought you 12 tickets.

At first, things were going as expected, Mr. MacQuarrie said. The winter months went by, no one picked the ace and, by the start of summer, the jackpot was at about $59,000. Local residents played and, from time to time, people from neighbouring towns and counties did too. Mr. MacQuarrie said organizers believed at the time that with a bit of luck, the jackpot would grow to maybe $200,000 or $300,000. That would generate a decent haul for the two organizations splitting the profits – the legion and a local skills-training centre for adults with intellectual disabilities. Both non-profits planned to use the money to upgrade their facilities.

But something happened over the summer. Inverness got busier as people returned to their summer homes in the area and vacationers passed through. And the jackpot grew. The town by the sea held its annual Inverness Gathering, a week-long Celtic festival of dances and general merriment. And then the contest bled into the entertainment and festivities.

"At that point in time, something changed," Mr. MacQuarrie said. "It became part of the festival. And it continued. After July and into August, it kept growing and growing. And people kept coming every week, from all over Cape Breton and all over the province."

By the end of September, the jackpot topped $1-million. And because of the volume of people coming to their town – more than 10 times the local population at its peak – local residents recognized they had to chip in and help the two small organizing committees. Volunteers stepped up to prepare the tickets. Others offered to help organize parking. Musicians entertained the lottery players, who had a lot of spare time to kill. Local retailers did a brisk business, including a trio of young entrepreneurial girls who pocketed $250 for their lemonade and cookies.

"The community just seemed to embrace the idea that this Chase the Ace is more than just a fundraiser," said Mr. MacQuarie. "It's our community putting forward our best foot. And that wasn't anything that was planned."

Duart MacAulay, a local political representative for Inverness County, credits good weather, a rising jackpot and stellar organization aided by an army of area residents for the contest's success. He said two other Cape Breton municipalities, Port Hood and Whycocomagh are also in the midst of Chase the Ace contests (with some 15 to 18 cards left) and they're looking to Inverness to see how they handled the situation if their own contests continue.

"This thing just snowballed," Mr. MacAulay said of the Inverness game, noting the town's hospitality was a major factor in driving visitor interest in returning there. "This community put an atmosphere on that was something else."

Reached on Sunday after her big win, Ms. MacAskill, 62, was in Port Hawkesbury, perusing Tupperware, jewellery and other offerings at what she called a "fall extravaganza" put on by local merchants. A non-drinker and non-smoker who lives modestly, she says Inverness's contest became her "big splurge." Since August, she says she spent about $100 every Saturday on the game, even though she never really believed she would win.

Asked why she kept returning to Inverness, about an hour's drive away from her home in Englishtown, when she felt the odds were against her, she said the town put on a "carnival atmosphere" that was very friendly and welcoming.

"It was like a great big kitchen party," she said, adding she believes only a minority of communities would be able to rally similar support from their residents for such a disruptive event. Going to the store was not an option on Saturdays because it was too crowded. Driving somewhere was impossible because the streets were choked with cars and people.

"They literally didn't have a home town for that day. … When [we talk about] duplicating this somewhere else, that's what they would be coping with. They'd have to be prepared to give up their community every week. It's quite a thing." 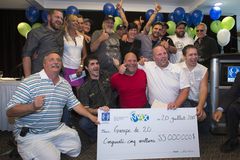 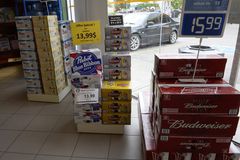