The 300-year-old Cape Breton fishing village of Gabarus and its 78 residents are finally getting a fix for the crumbling seawall that just barely keeps the Atlantic Ocean from swallowing up their community.

Three levels of government are pitching in $700,000 to repair a part of the wall – after years of wrangling over exactly who owns it. No government would take responsibility for the seawall, leaving residents with a rapidly crumbling structure and fearful of what the next storm would bring.

The promised money – $100,000 from the Cape Breton Regional Municipality and $300,000 each from the province and Enterprise Cape Breton Corporation, the federal regional development agency – will fix about half of the seawall at the north end.

Marlene Usher, the acting director of ECBC, said her agency's commitment is "firm". She is waiting, however, to see paperwork on the exact costs before signing off completely.

Residents (or Gabaroosters, as they refer to themselves) had lobbied hard for the wall to be completely rebuilt, which could cost as much as $5.3-million. But they will have to settle for this repair to the existing wall.

"It buys time," says Alfie MacLeod, who has been the Conservative MLA for the area since 2006 and has been pushing for some sort of solution. "It's a step in the right direction. The people of Gabarus deserve to have that wall fixed and not have to go to sleep at night wondering what in the world is going to take place the next morning."

He credits the Friends of Gabarus (FOG), a group of concerned residents led by Tim Menk and his partner, Gene Kersey, who relentlessly pursued all levels of government for achieving this funding. The two could not be reached for comment.

The village population spikes to about 165 in the summer. There is a small commercial fishery worth about $3-million to $5-million a year that employs about 25 people.

Tenders will be going out next week and the hope is that the wall will be repaired before the fall storm season.

Mr. MacLeod says this is a "good day" for the people of Gabarus. He noted that repairs done to the wall in the 1980s lasted until about two years ago. Since then subsequent storms, including a couple of storms last winter, have caused more degradation.

Although the provincial and federal governments are contributing to help repair the wall, they are refusing to claim ownership.

"The seawall is not owned by the province," states the release from the Nova Scotia government announcing its funding contribution. "It was built by the federal government in 1946, and some reconstruction was done in the 1980s."

The federal government has also stated that it "will not assume ownership or any future responsibilities for the maintenance and repair of the Gabarus Seawall." It argues that the wall is "located almost entirely on land owned by the Province of Nova Scotia."

The drive to find money for repairs was led by Cape Breton Regional Municipality Mayor Cecil Clarke, who was elected to his post just last year. He helped put the parties together – and it is the municipality which will act as the general contractor for the repairs.

"This is not about vote-getting, it's about doing the right thing," says Mayor Clarke. What's most important to me is we found a soluton and we weren't just taking a debate over ownership versus being what was really important, and that is preserving the way of life of a coastal community."

However, Mr. Clarke noted that there is an "ongoing divestiture, both provincially and federally, of coastal assets – and no one really wanting to take those on."

For a Nova Scotia fishing village, there’s danger of falling into the ocean
April 29, 2013 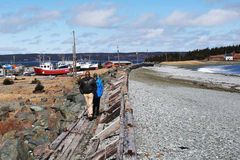 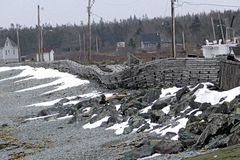