The rugged coastline of Nova Scotia is home to more than 10,000 shipwrecks – a coveted treasure of sailing ships, steamships and paddle wheelers, most from the 1700 and 1800s.

The wrecks, valuable in their own right, are priceless monuments to human exploration. Yet, if the delicate vessels are left unrecovered for too long, they risk becoming lost to the frigid Atlantic waters in which they dwell.

Now the area once fought over by pirates has become the scene of a battle between a cash-strapped government and private enterprise over who has the right to explore and salvage these treasures. It's an underwater echo of space exploration in the United States, which has seen a major decline in federal funding since its heyday of the 1960s, before companies such as Virgin and Red Bull stepped in.

The Nova Scotia government, struggling to balance its books, says it cannot afford to make such exploration a priority. Private explorers, meanwhile, are keen to step in.

At the forefront of these private interests is Terry Dwyer, who has created the first shipwreck school in Nova Scotia.

The seasonal school will be run by five part-time instructors and will teach everything from underwater photography to detecting objects through sound technology. It's adventure tourism and professional training all in one, except for one glitch: Shipwreck salvaging is illegal in Nova Scotia. And while the school itself will not be stripping wrecks of their artifacts, the initiative is one step forward for the private sector in this final frontier of exploration.

The southeast winds are famously unforgiving on the coast, where ships hoping to follow the 49th parallel to England misjudged the rocky ledges, crevices and gullies extending to the shore.

Private treasure-salvaging operations were made illegal in Nova Scotia about three years ago, after the province bowed to pressure to "match the spirit of the UNESCO Convention on Protection of Underwater Cultural Heritage," according to a news release from 2010.

Now, to do any kind of reconnaissance work, divers must obtain Category A heritage research permits through the Department of Natural Resources. Only two were handed out in 2012, and the department was unable to comment on whether those were for exploration or environmental assessments.

Laura Bennett of the Department of Communities, Culture and Heritage says the government does not have the funds for shipwreck salvaging.

"There's a desire for this kind of thing," she said, "but government has many competing priorities at any given time."

The province put an end to private enterprise treasure salvaging to maintain control over Nova Scotia's wrecks – but cannot afford to do the work itself.

David Christianson, former manager of collections at the Maritime Museum of the Atlantic, looked after the vast number of shipwreck artifacts in the museum's archives for years. In an interview in November, he said that under the Treasure Trove Act, which gave salvagers the ability to cash in on their finds, the general interest of Nova Scotia was not being reflected in the "commercialization and the selling of historical objects."

"We would rather see archeological sites left undisturbed until such time that there is good research design, the proper questions asked and the resources to recover the wreck objects in a way that's done to archeological standards," Mr. Christianson said.

But Mr. Dwyer believes that if the province keeps waiting for money to come around, there won't be any wrecks left to find.

"The ocean will destroy anything within the continental shelf level. It's very much a caustic soup – whatever you put in it will become destroyed," he said.

It's a back and forth battle that salvagers and archeologists are used to having with the government in Nova Scotia.

"I think if anything [the shipwreck school] might help spur them on to take a look at what's in our backyard for history and for shipwrecks," Mr. Dwyer said. "And for the private sector, it's clearly the only way to go."

Mr. Dwyer says the worldwide demand for the skills involved in shipwreck hunting is insatiable. He ran a similar program in the 1990s that took tourists out in Zodiacs to locate and explore underwater treasure – before the Treasure Trove Act was repealed, effectively putting a halt to legal private exploration. 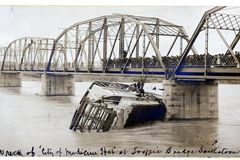