Invaders in the Arctic: How ships and climate change are bringing strange species to Nunavut

As higher temperatures proliferate in Canada's Arctic, scientists have begun to notice signs of encroaching species from warmer climes. As Ivan Semeniuk reports, the race is on for them to establish a baseline while they still can

The Canada C3 Expedition is circumnavigating all three of Canada’s coastlines to mark the country’s 150th birthday. Last week Ivan Semeniuk travelled on the C3 ship for Leg 10 of its journey, from Cambridge Bay to Kugluktuk, Nunavut.

There's no mistaking the Crystal Serenity. Like a luxury hotel on water, the giant cruise ship loomed at the entrance to Cambridge Bay, Nunavut, late last month on its second trip through the Northwest Passage in as many summers.

Faced with more than 1,500 passengers and crew – enough to nearly double the population of the tiny port town – the community carefully manages the ship's arrival. On this occasion, tourists were cycled through in batches for one-hour visits. The southern interlopers wore tangerine-coloured jackets, which made them easy to spot as they wandered the northern locale's gravel thoroughfares.

This scene of an increasingly accessible Arctic was visible from the deck of the Polar Prince, whose stop in Cambridge Bay as part of the C3 Expedition happened to coincide with the cruise ship's arrival.

The expedition, a Canada 150 initiative, is traversing the Northwest Passage with a cargo of scientists, artists, Indigenous elders, historians, community leaders, youth, journalists and educators.

Among the participants on board for this leg of the trip was Kim Howland, a research scientist with Fisheries and Oceans Canada, who joined C3 to continue a DNA sampling study that has been part of the expedition's science mission since its voyage began in June.

Unlike the easy-to-spot passengers from the Crystal Serenity, the visitors that Dr. Howland is most concerned about are hidden invaders that could soon be arriving in these waters as climate change opens the doors to increased maritime traffic.

Dr. Howland's focus is on the invasive species that can travel across oceans in the ballast water of commercial ships and that have a devastating impact when they arrive in places where they don't belong.

"The Arctic hasn't had to face this problem until now," said Dr. Howland, who is part of DFO's Arctic Research Division, based in Winnipeg. "But with ongoing warming and declines in sea ice making these waters more navigable – and more hospitable – it's a real concern." 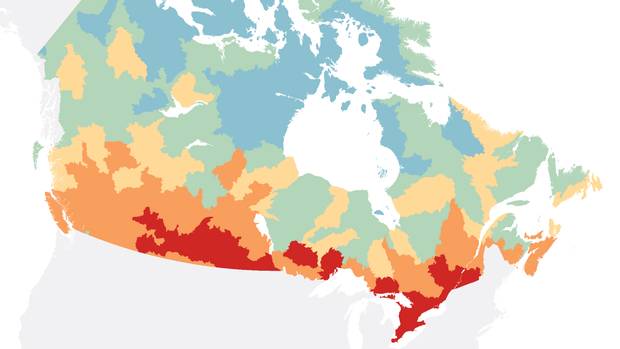 The DNA study Dr. Howland and her colleagues is conducting is aimed at giving scientists and officials a fair warning about precisely what is coming to Canada's northern seas. Rather than look for individual specimens of an invading species which may or may not be present, the study scoops up free-floating DNA from the water, searching for genetic traces of animals that are not native to the region. Because the C3 ship is making one continuous trip through the Arctic from east to west, it can provide a snapshot of where things stand in each region and how those regions compare.

For those who live along the Great Lakes, where zebra mussels have been a scourge since they arrived in the 1980s, the problem of invasive species is not new. Similarly, Atlantic Canada has been coping with its share of interlopers. They include the European green crab, a tenacious predator that out-competes native species and can have a destabilizing effect on intertidal ecosystems – all to the detriment to local fisheries. Another threat is the common periwinkle, a type of sea snail that also originated in Europe, and which the strains the marine food chain by eating all the algae in sight, as well as transmitting a parasite that affects fish.

Historically, these and other creatures were not deemed a threat to Arctic waters, as it was presumed the harsh conditions there would prohibit their growth. But Dr. Howland has just co-authored a modelling study which suggests that this is no longer the case for some potential invaders, and it will become less so as time goes on.

"The motivation was to try to understand the threat of the arrival of new species in a region where we don't have too much information," said Jesica Goldsmit, a postdoctoral researcher with DFO and lead author of the study, which was accepted for publication last week in the journal Biological Invasions.

In the study, the researchers looked at how eight invasive species might fare in the Arctic 50 years from now based on climate forecasts. The result: "We're predicting that all the species we modelled would survive," Dr. Howland said. While the degrees to which the species are likely to migrate northward vary, all of them would find a suitable habitat somewhere in the Arctic by the end of the 50-year run, the model shows. And all of them pose a threat to the ecosystem and traditional ways of life.

One of the locations at highest risk is the relatively warmer Hudson Bay, which is considered an Arctic ecosystem even though it dips well below the Arctic Circle. Another is the Beaufort Sea, above the coast of Alaska and Western Canada, which is open to shipping coming up through the Bering Strait.

Less clear is what will happen among the maze of channels and islands that makes up the central portion of Canada's High Arctic – also known as the Kitikmeot region – where the marine biology is far less explored. This is part of what has motivated Dr. Howland and other researchers who are participating in the C3, as well as others who are conducting studies in the area. And it's clear there is little time left to gather the baseline data before region is further transformed by warming temperatures and increased shipping traffic.

Sea and land alike are affected by climate change. Jeff Saarela, a botanist and director of the Canadian Museum of Nature's Centre for Arctic Knowledge and Exploration, was also on the C3 last week, armed with a permit to collect plants as part of the expedition. Taking advantage of the ship's frequent stops in places that few scientists have ever been able to access, he spent much of the voyage with his knees in the dirt, trowel in hand, extracting specimens.

"We know the Arctic is the fastest-warming part of the planet, and we know that species are responding," Dr. Saarela said. "To document when something has moved, you have to know what was there before."

Along the voyage there were hints of the transformation to come. After leaving Cambridge Bay, expedition leaders nosed their ship west and south to the now uninhabited hamlet of Bathurst Inlet.

In contrast to Cambridge Bay, this location was rich with plant life, including alder, a member of the birch family, that crowded the empty buildings nearly to adult human height. The rising shrubs stood in startling contrast to a surrounding landscape dominated by the lichens and low ground cover of the Arctic tundra. Photos of a nearby location taken by the Canadian Arctic Expedition more than a century ago show much less foliage, says David Gray, a biologist and part-time historian on the C3 team who has been carefully comparing past and present records.

Less well known is what has been happening in the area over past 50 years, at a time when climate change was likely just beginning to have a noticeable effect. It's a period that falls within the range of living memory, yet, ironically, after centuries of habitation by the Copper Inuit (so named because of the implements they fashioned out of natural copper deposits in the region), there is no one living permanently around Bathurst Inlet today to attest to the transformation.

Nowhere did this absence feel more poignant last week than at Umingmaktok, formerly called Bay Chimo, a sheltered cove nestled within a breathtaking landscape of craggy cliffs and verdant swaths of tundra sloping down toward the sea. Compared to the relatively flat and grey-hued surroundings of Cambridge Bay, it's easy to see why the semi-nomadic Inuit chose to live here, within easy reach of a bountiful ocean and a landscape populated by caribou and muskox. In 1915, when the Canadian Arctic Expedition pulled in at Umingmaktok, biologist Rudolph Anderson recorded that the settlement had "a good many people."

Mr. Anderson's assessment would prove short-lived. Epidemics imported from the south took their toll over the next few decades and in 1955, when a Distant Early Warning Line site was built at Cambridge Bay, a former trading post 150 kilometres to the northeast, it drew the Inuit off the land in search of work. Surrounding communities dwindled.

For Umingmaktok the final nail in the coffin came in the mid-1990s when a hostel associated with the residential school in Cambridge Bay was shut down. Parents whose children were at the school for most of the year were then faced with having to move in order to look after them.

Pamela Gross, an Inuk participant in the C3 expedition, summed it up when the ship reached Umingmaktok, a place where she spent a large part of her childhood: "Going back is very special, but it touches your heart, because we don't live here any more."

Later this month Ms. Gross, who is executive director of the Kitikmeot Heritage Society is leading a long-anticipated trip to bring a group of Inuit elders from Cambridge Bay back to Bathurst Inlet where they once lived. The idea is to use the landscape to trigger memories of a way of life that is fast disappearing but remains fundamental to both Inuit identity and hopes for an economically and culturally robust North in the future.

Meanwhile, in her own way, Kim Howland is using memory – in this case the molecular memory recorded in DNA – to help chart a course forward for the responsible management of the Arctic.

"It's part of what drew me to the region and why I keep going back," Dr. Howland said. "It's a place where we have the opportunity to communicate more directly with the people who use the resources and depend on the environment and where there is a strong desire to preserve these for future generations."

Video A day in the life aboard Canada C3