Nunavut is considering changing one of the most basic facts of economic life for its households and businesses by allowing them to buy the land their homes and buildings sit on.

On May 9, the territory will hold a binding plebiscite on whether municipalities should be able to release land for fee-simple ownership of the kind almost all Canadians in non-aboriginal communities take for granted.

Advocates say allowing people to buy instead of taking out long-term leases will make it simpler and cheaper for Inuit to buy homes and bring more money into a housing market that desperately needs more construction. Others say the government hasn't done its homework on the issue and fear private land ownership won't benefit the average Inuk.

"Looking across Nunavut, I do not see a lot of Inuit being positioned to take benefits from the sale of land," said Cathy Towtongie of the land claim group Nunavut Tunngavik Inc., which opposes private ownership.

"I do see a lot of non-Inuit that have the capacity, the capability and the dollars to buy land."

The plebiscite asks all Nunavut voters whether municipalities should have the power to release land they now hold for private sale. Most Nunavut land tenure is currently regulated by long-term leases.

Results will be calculated for each community, meaning some may choose to sell land and some may stick with the old system.

The territorial government is officially neutral, but information on its website suggests ownership could have advantages.

"Land transactions may act as a stimulant to the local economy and create a healthy real estate market," it says.

"The ability to buy municipal land may attract new investment in the communities and increase economic development activity and job opportunities. In some communities, private investment may improve the availability of land for development and have a positive effect on the delivery and pricing of housing and commercial space."

Private land ownership could also make mortgages easier and cheaper to obtain, said Chris Alcantara, a political scientist at Western University who has studied the issue.

"The approval process will be easier and the banks would be willing to give more money on fee-simple ownership just because it's a more secure form of property," he said.

Towtongie is not convinced – not least because information the territorial government has supplied on the issue dates from 1995, when the issue was considered during talks on the Nunavut Land Claim. Since then, she said, wide economic disparities have developed between different Inuit communities and between individual Inuit.

"Each of Nunavut's communities have experienced different opportunities and challenges," she said.

The government just hasn't thought this through, said Towtongie.

"We want baseline information on the benefits to the Inuit. I do not believe the government of Nunavut is prepared at this time."

She also objects to the fact the vote is being held at a time when many Inuit are out on the land.

"Some communities are basically closed down," Towtongie said.

The issue of private land ownership is common to almost all aboriginal communities, said Alcantara.

Alcantara points out that municipalities would be free to determine how much or how little of their they would release.

"It can do it in a gradual way and do it in a way that respects the multiple needs of communities," he said. "Governments need options to generate revenue, to generate policies that serve all residents." 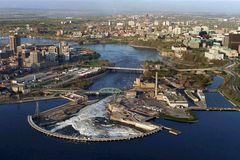