To an older generation of television viewers, Jack McGaw was most familiar as one of three hosts on Live It Up , CTV's weekly lifestyle and consumer affairs program that aired from 1978 to 1991. Assisted by British journalist Alan Edmonds, McGaw was also the show's creator and executive producer. The upbeat testing of products, advertising claims, and consumer complaints were key to the show's content and popularity. Subjects such as car safety and ingredients in fast-food burgers were serious but went down easily when served with a liberal helping of tongue-in-cheek humour. Even though hosts regularly participated in stories, many of them zany, McGaw eschewed the role of buffoon. Former host Mary Lou Finlay says, " I do seem to recall that he got to test drive new cars or taste wine while I got oatmeal smeared all over my face."

McGaw, who died in October at 76, was known for his prodigious cool, but Patrick Rowan, a sound recordist for Live It Up , recalls the one time when he lost it. "We were shooting an item about wrestling. Jack was standing in the ring with a 6-foot-3-inch wrestler and asked about one of his moves. The guy picked Jack up, grabbed him by the wrist and ankle and spun him round and round. Jack, in a suit and tie, whizzed horizontal past the crew yelling, 'Put me down." To McGaw's credit, the item made it to air. Rowan says McGaw was the ultimate professional at delivering lines to camera. "He nailed it every time."

John Howard David McGaw was born in St. Boniface, Man., on May 22, 1936 – one of two boys born to Wilma and Keith McGaw. He grew up in Chilliwack where his father owned McGaw Empress Insurance. After graduating from Chilliwack high school, McGaw attended UBC, where he caught the broadcasting bug. McGaw became president of the Radio Society, which aired noontime programs at the university. At the society he met up with Ann Nuttall, a girl he dated in high school, who went on to work as a sound recordist for documentaries. Nuttall was attracted to the thoughtful young man, who spoke so softly that people listened carefully to what he had to say. The two married in 1956. By the end of 1960, McGaw had three children: John, Catherine and Shelley. According to Nuttall, McGaw was an excellent father who didn't mind changing diapers. Their marriage ended amicably after 10 years.

McGaw worked at various radio and television stations in Western Canada and Toronto before becoming a national CBC reporter. He joined CTV in 1967 as director of their flagship news-magazine show W5. McGaw travelled the world producing items and co-hosting the show for four years before becoming executive producer. He insisted that each W5 show have at least one "feel good" story.

Prior to starting Live It Up , McGaw was a producer/writer and host of CTV's Inquiry, where he applied his journalistic skills to a variety of hard-hitting documentaries that garnered huge ratings and a Mitchener Award for journalism.

Whether it was Live It Up , documentaries or specials, McGaw was meticulous to the point of perfection. Not a single word or frame slipped past that didn't meet his exacting standards. Mary Lou Finlay says, "He'd say, in the softest imaginable voice, 'Really? That's the best we can get?' Since all of us would rather have jumped off the roof than disappoint Jack, that was all he needed to do to send everyone back to the edit suite to fix whatever needed fixing."

Tough negotiating skills and a dependence on staff to use their homes and family for stories meant McGaw invariably brought shows in under budget, sometimes at the expense of crews.

"If you worked 24 hours straight, Jack would say that was three days rather than pay double or triple scale," Rowan says. "Overtime wasn't in his vocabulary."

If McGaw had a reputation for being frugal, he also had a reputation for being a kind mentor to less-experienced members of his team. Dorothy Engelman, owner of her own successful production company, began her career in 1983 as a production assistant at Live It Up. She says she won't forget McGaw telling her to never build a railroad track because it would lead to only one destination. Says Engelman, "He also told me to be more curious. To this day I ask myself whether I'm being curious enough."

McGaw was eternally curious about everything – particularly emerging technology. When it became feasible for viewers to provide feedback by dialling a phone number, McGaw was quick to independently produce a number of hugely successful shows for CTV, such as The National Driving Test, which produced instant statistics. McGaw went on to produce almost two-dozen prime-time national test programs and specials for the network.

In the 1990s, McGaw moved to Vancouver to become executive producer of The Urban Peasant, a cooking series with James Barber. The show was a precursor to the wide variety of cooking shows available today. McGaw was both blessed and cursed with a visionary sense of what would work on television. The concept of many shows he pitched unsuccessfully to network executives in the 1980s and 1990s are on the air today.

Journalist Ann Medina, McGaw's second wife, says McGaw was ahead of his time and an original from day one. "His mind was always in tune with making things accessible and fun for the viewer," says Medina, "even for the most boring and complex of subjects, like economics."

The two journalists met in 1974 when Medina was a correspondent for ABC news. Sent to Ottawa because then prime minister Pierre Trudeau lost a non-confidence vote and the government was about to fall, Medina was instructed that her go-to connection was producer Jack McGaw. The attraction, she says, was instant. They married in June 1975, divorcing eight years later, again amicably. "Our divorce cost $400. The only point of contention was Max, our parrot. Jack said 'You have him.' I said 'No, you have him.'" Medina ended up with the bird.

In 1986, McGaw married Marcia Macleod, a widow with three sons. Devoted to his own children, McGaw assumed a new and happy role as stepfather. An avid and adventuresome sailor who loved racing, McGaw delighted in times spent on his boat entertaining friends, making his renowned Caesar salad, and mixing a sublime gin and tonic.

Even though he also adored bridge and politics, his hobbies weren't sufficient to sustain McGaw in retirement. Always one to move forward, he left television and returned to his roots: radio broadcasting. In 2001 he founded Information Radio, an expansive network of small radio stations broadcasting from Nova Scotia to Ontario.

In hindsight, Mary Lou Finlay says, McGaw was the finest producer she ever knew. "He was smart, funny and original. He never talked down to anyone, but neither did he make things too complicated." David Cobb, a writer on Live It Up, remembers McGaw as a man who was never fazed or upset. "He looked forever happy in his own skin. He made his professionalism look so damn easy, which, of course, it wasn't."

Jack McGaw died on Oct. 18 from gall bladder cancer at his home in Kitchener. 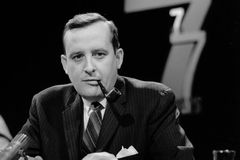 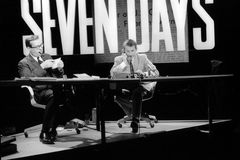