A smuggling ring brought narwhal tusks from the Canadian Arctic into Maine in a trailer with a secret compartment and then illegally sold them to American buyers, officials said.

Andrew Zarauskas, of Union, N.J., and Jay Conrad, of Lakeland, Tenn., will be arraigned in Bangor, Maine, next week on 29 federal smuggling and money laundering charges each.

For nearly a decade, two Canadians smuggled the whale tusks into Maine and shipped them via FedEx to Mr. Zarauskas, Mr. Conrad and other unnamed American buyers, according to an indictment.

Narwhals are known as the unicorns of the sea for their spiral, ivory tusks that can grow longer than 8 feet. The tusks can sell for thousands of dollars each, but it's illegal to import them into the U.S.

The court document doesn't specify how much money was involved, but it says the Canadian sellers received at least 150 payments from tusk buyers.

"The conspiracy we've alleged was over a period of 10 years, so there appears to have been enough of a market to support that length of conduct," said Todd Mikolop, who is prosecuting the case for the environmental crimes section of the Department of Justice.

Narwhals live in Arctic waters and are harvested by Inuit hunters for their meat, skin and tusks, said Calvin Kania, president of Furcanada in British Columbia, which sells tusks to buyers who want them for display purposes or to turn into jewelry.

The tusks range from 3 feet to more than 8 feet, and typically sell for $1,000 to $7,000 each, Mr. Kania said. He ships tusks worldwide, but not to countries that prohibit imports, including the U.S., the United Kingdom and Australia.

There is no defense attorney listed in court documents for Mr. Zarauskas. An attorney from the federal public defender's office is listed as Mr. Conrad's lawyer, but she was out of the office and not immediately available for comment. Phone messages were left for Mr. Zarauskas and at possible listing for Mr. Conrad.

The indictment filed last month says the two Canadians, whose names are redacted, would buy the tusks from retail stores in northern Canada and use the Internet and email to arrange sales to U.S. buyers.

The Canadian sellers would bring the tusks into the U.S. at the Calais, Maine, border crossing in a vehicle modified to conceal the tusks or a trailer with a false bottom, according to the indictment. They would then drive to Bangor and ship them.

Two Canadians have been charged there in connection with the case.

The only other narwhal tusk smuggling case Mr. Mikolop was aware of involved Nantucket, Mass., antiques dealer David Place, who was sentenced in 2011 to nearly three years in prison for importing and trafficking in sperm whale teeth and narwhal tusks worth up to $400,000. 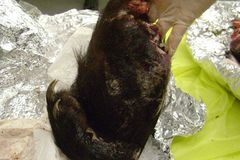 Two Quebec men face charges in sale of bear parts
April 14, 2003
Bear-poaching network dismantled in Quebec
November 21, 2002
Report an error
Due to technical reasons, we have temporarily removed commenting from our articles. We hope to have this fixed soon. Thank you for your patience. If you are looking to give feedback on our new site, please send it along to feedback@globeandmail.com. If you want to write a letter to the editor, please forward to letters@globeandmail.com.
Comments are closed