A vision of the future,
on the horizon

Canada's busiest bridge, the solid and conventional Champlain, has served its purpose, writes Robert Everett-Green. Montreal's new bridge, with its tuning-fork towers and sleek, airy design aims to do more than just carry you home.

Crossing to the other side is a familiar religious metaphor. It would be naive to think that an actual bridge, especially one that spans a mighty river such as the St. Lawrence, is only about getting from one shore to another.

Besides offering a feeling of panoramic elevation seldom found on solid ground, a bridge is a meeting place and a focal point, a feat of engineering that is also a statement about the people and place to which it belongs.

So what will be expressed by the forthcoming new Champlain Bridge, whose builders, SNC-Lavalin Group Inc., were announced in Montreal on April 15, beyond the need to keep traffic flowing between Montreal and the South Shore?

Danish architect Poul Ove Jensen’s cable-stayed design, as revealed last summer in a video animation, is remarkably airy. From the tuning-fork towers to the slender pillars, everything looks pared-down and sleek. When the video’s virtual camera dives between double rows of parallel suspension cables, a cascade of piano arpeggios makes the bridge seem like a giant Aeolian harp singing in the breeze.

Compare that to the bridge Montrealers have been crossing since 1962. It’s stolid and earthbound, much of it little more than a regular road stuck on concrete pillars. Its most distinctive feature, the central cage of cantilevered steel girders, has a connector-set look. Apart from the faintly decorative curves on the top of that cage, the bridge projects workaday function and power. It’s completely in line with the image that Canadian heavy industry had of itself at the mid-century, when it was a main pillar of our economy.

When it was new, however, the bridge was also a forward-looking structure, built on the correct assumption that traffic between city and suburbs could only grow. Just 7,300 cars crossed the new $35-million bridge in 1963. Now nearly 60 million crossings are recorded each year, which makes the Champlain this country’s busiest bridge, well ahead of the nearly 35 million trips across Vancouver’s Port Mann bridge.

Scroll through images of design concepts
Montreal's new Champlain Bridge is planned to last 125 years from its projected completion in 2018. (Arup/Government of Canada)

You could also say that the old bridge proposed a vision of the future in which all those additional suburbanites would live. The sheer scale of the thing – the biggest bridge in the country at the time – implied that the way ahead would be an amped-up version of the present. Wealth and employment would be driven by the same factories, foundries and mills that kept the economy humming in the early 1960s.

The future was a big topic in those days in Montreal, which had been angling for a world’s fair since the late 1950s. The bridge was under construction when the city clinched the deal on Expo 67, in which Montreal would show the world what lay on the horizon.

The old Champlain’s pride in unfussy engineering was in harmony with some of the ideas of R. Buckminster Fuller, the engineering guru who would soon build his most famous structure on the Expo grounds. Mr. Fuller said there was beauty in any well-engineered thing, even a grain silo. But he also believed the built future would be buoyant and transparent, not earthbound. His Dymaxion house, designed in the late 1920s, was made of light-weight metals and glass and hung on a central mast. It was meant to be dropped anywhere by helicopter, and removed the same way when no longer needed. His American pavilion at Expo (now the Montreal Biosphere) looked like a big geodesic bubble.

In that respect, the new Champlain design looks like the bridge of the future as Mr. Fuller might have imagined it. Its smooth shape is like an idea of motion filled out in minimalist style, with no undue emphasis on gravity. It’s the bridge Expo 67 seemed to dream about, showing up 50 years late.

But the new Champlain, like the old, also reflects the industrial economy of its time. There’s been a shift of production from milled and manufactured objects to nearly immaterial things – software, virtual services and Web commerce in things mostly imported from elsewhere. Goods are downloaded and speed rules. In our city cores, almost all new buildings of significant size aspire to transparency, glass walls being the upright rectangular form of Mr. Fuller’s geodesic triangles. 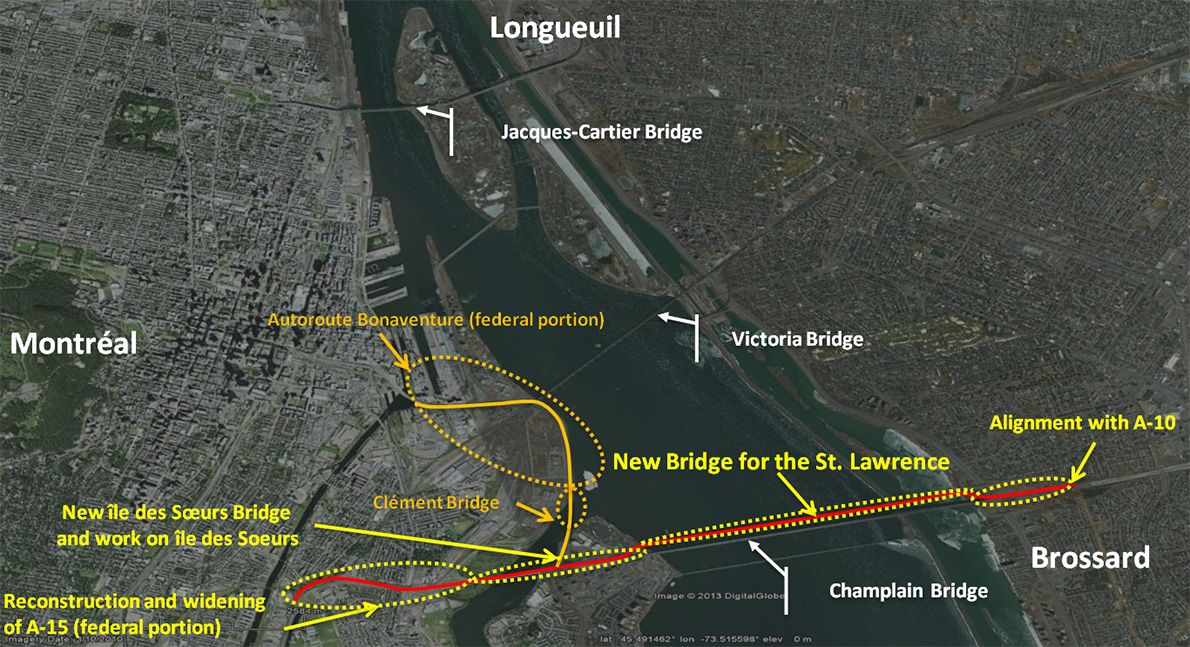 If the new Champlain represents the now, what does it say about the future? Mainly that the way ahead will be an intensified form of what we already have. That’s basically the message of the old Champlain, a digital revolution ago; but the old Champlain turned out to be wrong, or at least short-sighted. The bridge itself suffered from the short-sightedness of its political masters, who tried to scrimp with some trick engineering from France for the southern approach section, which used concrete girders reinforced with steel cables. That move has stymied replacement of individual beams, and turned the structure into a maintenance nightmare.

The new bridge is planned to last 125 years from its projected completion in 2018. If that seems a long time, consider that the Victoria Bridge, still used by Montrealers, has been standing in its present form since 1896, and was thought to be a relic before the old Champlain was built.

What will they say about the new Champlain bridge in 2143? Will it be seen as a charming but misguided take on a future that turned out quite differently? That’s the thing about a major bridge: It’s an augur and time capsule that will also carry you home, traffic permitting, in time for supper.