Stones were once canvas for stories. We marked milestones and journeys on rocks, painting vivid images of big hunts, mighty warriors and spiritual quests. Tens of thousands of tales have been told in bright shades of ochre – stories that, under the stress of weather and time, have been fading from our landscape. Lost forever in some cases, or so we thought.

The digital age is breathing new life into ancient rock art around the globe, from Mexican caves to the Sahara Desert to the mountains and foothills of Western Canada. With the help of NASA-inspired software called DStretch, pictographs no longer visible to the naked eye are being revived, giving cultural archivists a fresh look into the past and a vital new preservation tool.

"It opens an entirely new chapter in rock art analysis and … rock art preservation," said Parks Canada archeologist Brad Himour. "DStretch has the ability to bring back images and pictographs that we would have thought of as being lost up until just very recently."

How the software was developed

Rock art had long fascinated Jon Harman. The American mathematician sought out pictographs on vacations, snapping pictures of stones and caves even when all that remained were indecipherable red blotches. Photo-editing programs improved the images, but not by much.

A friend pointed Mr. Harman to an image-enhancement technique known as decorrelation stretch. Developed by NASA's Jet Propulsion Laboratory, it has been used to enhance photos of Mars. Perhaps the technique would work for faded pictographs, his friend suggested.

Mr. Harman took up the challenge and, with a few modifications, DStretch was created in late 2005. He provides the plug-in at no cost through his website. It's designed to work with the ImageJ program, on PCs and Macs.

He estimates hundreds of professional and amateur archeologists have applied DStretch to digital photos of rock art, bringing the faintest of hues to life. The software has been used in Tassili n'Ajjer, a mountain range in the Sahara Desert of Algeria known for prehistoric pictographs. It has also been tested on paintings in the San Borjita cave of northern Mexico and more recently on aboriginal rock art sites in Western Canada.

"It's our heritage. It's the heritage of all of us," Mr. Harman said. "These are beautiful works of art that need to be preserved."

Worried about the number of pictographs vanishing from the landscape in B.C. and Alberta, Parks Canada archeologists in the region were looking for ways to record and preserve the rock art and their stories.

They tried cross-polarization photography, but the process was dangerous because it required pictures to be taken in complete darkness, after midnight in remote regions, Mr. Himour said. For Parks Canada, DStretch was a game-changer.

Mr. Himour first used the software in the summer of 2010, applying it to photos taken at Sinclair Creek in British Columbia's Kootenay National Park. Unlike the cross-polarization technique, pictures could be taken during the day. No special filter or flashes were required.

The parks archeologist knew the site contained five panels of pictographs, although only two are clearly visible today. In 1962, Parks Canada warden Kurt Seel sketched one of the now-faded pictographs in a notebook – the drawing included a line of elk and a human figure.

Through DStretch, these lost images reappeared. Mr. Himour was amazed.

"They showed up almost as clear as they had back in the [1960s]" he said. "Just striking. Absolutely striking."

Since then, Parks Canada has taken about 2,500 photos at 30 rock art sites in Kootenay and Banff National Parks and in the foothills of Alberta as part of its Pictograph Project. The best images have been presented to native elders for interpretation. Stories of warriors and vision quests are emerging.

A digital window into the past

Harley Bastien often goes on hikes to look for pictographs. He is a member of Piikani First Nation in southern Alberta, and rock art offers a connection to his ancestors, showing him where they lived, fought and hunted for buffalo.

"For me, just to hear about them, it's not enough. I want to go and stand at the site," he said. "It's basically a testament that we're here, have always been here, and we're still here."

Piikani is one of the four native groups participating in the Parks Canada project. Others include Stoney Nakoda from Alberta and Kinbasket and Ktunaxa from B.C.

In parts of the United States, some aboriginals have opposed photographing rock art because they believe the images are sacred, Mr. Harman noted. In Canada, though, it appears the practice has been welcomed as a way to preserve a fading history for future generations. Mr. Himour expects DStretch will spread to other parts of the country.

Photos from the Pictograph Project will rest with both Parks Canada and the aboriginal groups. They're working to determine how best to protect the rock art identified and share the images and stories uncovered. Recommendations are expected later this month.

Mr. Bastien and Xavier Eugene, a Kinbasket member, hope some of the images will be displayed publicly. Their ancestors' rock art varied greatly. The Columbia Plateau natives of B.C. tended to paint images depicting vision quests and spiritual ceremonies, while the Piikani were a warrior society. Many of their pictographs include drawings of shield-bearing fighters.

"Those paintings evolved when we had no form of writing," Mr. Eugene said. "This is how our first nation wrote their history. … We thought a lot of it got lost." 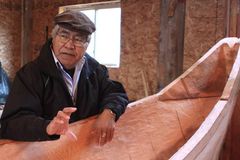 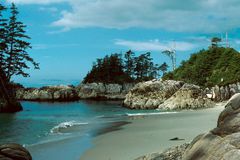 Alberta drawings support ancient myth
June 29, 2001
Follow us on Twitter @globeandmail Opens in a new window
Report an error Editorial code of conduct
Due to technical reasons, we have temporarily removed commenting from our articles. We hope to have this fixed soon. Thank you for your patience. If you are looking to give feedback on our new site, please send it along to feedback@globeandmail.com. If you want to write a letter to the editor, please forward to letters@globeandmail.com.
Comments