College instructors in Ontario are on strike after weekend negotiations failed to produce a deal that could keep classes open for over 230,000 full-time students at the 24 institutions across the province. Here's what you need to know.

Who is on strike?

About 12,000 instructors who are represented by the Ontario Public Service Employees Union, which has over 130,000 members and a $72-million strike fund.

The colleges are represented by the College Employer Council, which has negotiated on behalf of all colleges in the province since 2008.

When Colleges were first established 50 years ago, bargaining was done through a council whose members were appointed by the Minister of Education. But now, the Employer Council is independent of government. In fact, government funding accounts for 44 per cent of all the revenue colleges raise, down from 52 per cent in 2008.

What are the main issues in the strike?

The union also wants more job security. Instructors should be hired based on their seniority and experience, and new teachers should only be considered if current qualified instructors turn down an opening, the union says.

But the Employer Council counters that the union's demands would add $250-million to the costs of running the schools.

The exact numbers for full– and part-time instructors or teaching hours are not easily found and that lack of clarity makes it difficult to sort out each party's claims. Collecting and publishing staffing numbers should be done together with the Ministry of Labour, the union is demanding as part of negotiations.

There is also disagreement over the union's request that the contract include protections for academic freedom.

Can the government force the college instructors back to work?

Ontario has only legislated college teachers back to work once during the three strikes that have occurred in the sector over 50 years. That was in September of 1984 after a strike that kept students out of class for 18 days. The core issue was workload.

In October 1989, a 20-day strike occurred over wages and sick leave.

A third strike of college academic staff occurred in 2006. That disruption lasted 20 days.

"The government is not contemplating any kind of legislative action that would put employees back to work or address a particular demand of either side," a government spokesperson has said.

How much are college teachers paid?

Full-time professors may start at roughly $60,000 a year and can see their salary increase to $106,000 over time. Partial-load employees, who teach between six and 12 hours a week, can make between $48 and $140 an hour depending on their education and experience. The union has asked for a raise of 9 per cent over three years, which the colleges say is out of line with other contract settlements in the public sector. Instead, they have offered 7.75 per cent over four years with a new maximum salary cap of approximately $115,000.

How long will the strike last?

That is impossible to say. Just under 70 per cent of college instructors voted to strike in September. The Employer Council has asked the union to present its last offer to the membership. The Council can actually take its offer directly to instructors even if the bargaining team is not satisfied with the terms offered. In 2010, the Council did exactly that and saw a narrow majority accept an offer that the bargaining team had rejected two weeks earlier.

Tens of thousands of students have signed a petition asking for fee refunds of $40 for each day that the strike is on. The government has said that it hopes a short strike will minimize lost class time and no fee refunds will be necessary. 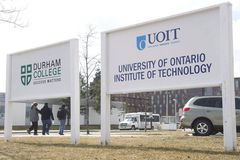