'Discharge him at all costs': A case study in overcrowding at Ontario's hospitals

A Toronto-area hospital's efforts to get Ilias Spanidis, 88, discharged included threats to send him to a homeless shelter and charge him $1,100 a day to stay, his son says. Health reporter Kelly Grant looks at his case and Ontario's wider challenges finding room for patients

Ilias Spanidis had been in a hospital north of Toronto for nearly a month when a doctor decided the 88-year-old widower had recovered enough from an old spinal fracture and his spells of vertigo to be discharged.

Mr. Spanidis's son, Tom, who visited the Markham Stouffville Hospital daily to bathe his father and feed him homemade Greek fare, disagreed vehemently, insisting his father still needed round-the-clock care that he and his wife weren't equipped to provide.

When the younger Mr. Spanidis refused on May 1 to take his father home, hospital officials levelled an escalating series of threats that the 53-year-old says culminated in this warning: If you won't let your father into the home you share, an ambulance will drop him off at a homeless shelter.

The hospital even put the elderly patient, who speaks no English, on the phone with a Greek interpreter on Tuesday evening to inform him that he was bound for a shelter, according to his son.

"Their emphasis," he said, "was to discharge him at all costs."

By May 3, the Markham Stouffville Hospital – which declined to comment on the specifics of this case for privacy reasons – relented and agreed to move the octogenarian to a transitional care unit for now.

But the Spanidis family's experience is not an isolated one, according to a lawyer for the elderly whose Toronto-based clinic fielded about 500 calls last year on hospital-discharge issues, twice as many as it received in 2012.

Overcrowded hospitals in Ontario and across the country are desperate to free up beds occupied by frail seniors who no longer need acute care but have no place else to go, a problem that will grow worse as the greying of Canada's population accelerates. 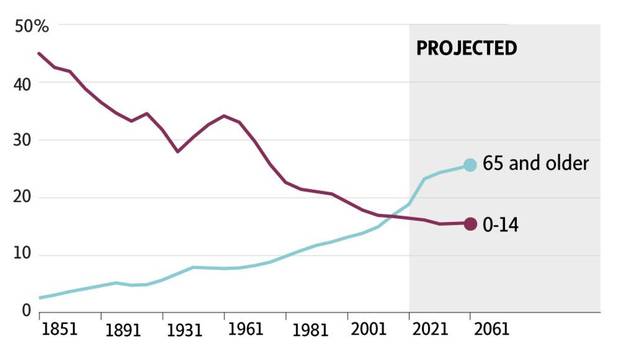 The greying of Canada’s population is accelerating, as the latest census numbers show seniors outnumber children for the first time in the survey’s history, Tavia Grant explains.

Some hospitals are resorting to extremes to persuade the elderly to leave, mindful that if such patients stay, they run the risk of declining physically and mentally or catching a hospital-borne infection. Hospital administrators are also keenly aware that beds clogged by patients who are technically discharged contribute to overcrowding on other units, forcing the newly ill to languish in the emergency department or receive medical care in hallways, cafeterias, TV rooms and other "unconventional spaces."

After years of bed cuts and funding restraint, Ontario's hospitals are already bursting at the seams. More than half of the province's acute-care hospitals – 90 in total – have been operating for the past five years at an average occupancy rate that exceeds the frequently cited ideal of 85 per cent, according to figures obtained under freedom-of-information laws and analyzed by The Globe and Mail.

Seven Ontario hospitals averaged occupancy rates above 100 per cent between 2012 and the end of last year, but many others experienced periods that exceeded the 100-per-cent threshold, including Markham Stouffville Hospital, which saw its occupancy rate peak at 112.5 per cent in the fourth quarter of 2015-16.

"At our hospital, most of our patient-care units run close to 100-per-cent capacity all the time," said Lisa Joyce, a spokeswoman for Markham Stouffville Hospital. "This presents challenges in admitting new patients on a daily basis. To ensure that we are acting responsibly, we must make sure that we are able to support patients who need in-patient, specialized care … we would never discharge a patient who was not medically stable or who still required hospitalization."

Jane Meadus, a staff lawyer at the Advocacy Centre for the Elderly, said concerns about how frail seniors are discharged from hospitals are "by far and away" the top reason people contact her community legal clinic.

"It's been increasing over the last few years. We have a crisis in the sector," Ms. Meadus said. "Every few months we will hear from someone where the family comes and says the hospital is threatening to send someone to a homeless shelter, or to just dump somebody in your driveway … We know there's a huge pressure on doctors just to discharge people."

Ontario's Liberal government, which froze hospital operating budgets in four of the past five years, provided some relief to hospitals in its recent budget, with a 3.1-per-cent increase in base funding and a promise to spend an additional $9-billion over the next decade building new hospitals and redeveloping old ones. The government is also continuing to hike funding for home and community care.

However, the budget did not commit to adding any new nursing-home beds. As of the end of last June, there were 28,317 people in the queue for a long-term care bed in Ontario, up from 20,055 four years earlier, but the ministry says the median wait time for a bed actually dropped by 15 per cent during that period.

Mr. Spanidis is now in the line for two long-term care homes, both of which have waiting lists at least one year long.

"Our intent is not to keep him here because we are fully aware of the downfalls and the disadvantages of having a person in the hospital," Tom Spanidis said. "But it's worse for him to come home [right now]."

The elder Mr. Spanidis has been at Markham Stouffville Hospital since the early hours of April 6, when he awoke at home complaining of dizziness and excruciating pain in his head and neck, two days after he was last released from the same hospital.

Mr. Spanidis, who has congestive heart failure, had been taking medication that made him dizzy; he was also diagnosed with vertigo in March.

He suffered serious falls several times this year, leading his son, a former aircraft mechanic who stopped working full-time to care for his father, to worry that he and his wife, Eleni, could no longer keep the 88-year-old safe at home.

When the elder Mr. Spanidis returned to the hospital on April 6, a CT scan revealed he had an old, previously undiscovered fracture in the vertebrae at the top of his spine. A brace was placed on the elderly man's neck and the family was told the fracture would take at least six weeks to heal.

But a doctor deemed him well enough to go home earlier. His son believes his father needs to heal fully and start physiotherapy before being released.

When the younger Mr. Spanidis dug in his heels, hospital officials told him they would begin charging his father $1,100 a day to stay. The Ministry of Health and Long-Term Care confirmed that hospitals are not permitted to charge patients who are on the waiting list for long-term care more than $58.99 a day, the co-pay for a basic room at a nursing home.

Hospital staff also threatened to send his father home in an ambulance, the son said. On May 2, just after 5 p.m., the hospital summoned York Regional Police to speak to the family about the discharge plan, a scene that unfolded in front of the panicked 88-year-old patient, who couldn't follow the conversation in English.

"[The officer] started in on me with what our responsibilities in life are and how we should all care for our parents," Mr. Spanidis said. "I said to him, 'You have no idea what this case involves and how long I've been caring for my father.'" (A spokesman for York Regional Police confirmed that three officers were dispatched to Mr. Spanidis's room, essentially to "referee" the discussion. No charges were laid.)

It was toward the end of that meeting that Tom Spanidis said he was told his father would be dropped at a homeless shelter.

Asked to comment on Mr. Spanidis's case, Health Minister Eric Hoskins said by e-mail that he expects all patients and families be treated with dignity and respect and that he has "been working hard to ensure people leaving hospital have a full range of options to receive appropriate care when and where it's needed."

With a report from Michael Pereira

HEALTH IN ONTARIO: MORE FROM THE GLOBE'S KELLY GRANT