An Ontario judge has struck down one of the Conservative government's signature drug laws – a six-month minimum jail term for growing between six and 200 marijuana plants for the purpose of trafficking.

The ruling came after a constitutional challenge brought by a man who had pleaded guilty to working in a grow-op. The man, Duc Vu, 42, of Brampton, Ont., called the minimum sentences for growing marijuana "cruel and unusual punishment" under the Charter of Rights and Freedoms. And the judge agreed.

Mandatory minimums have been a pillar of the federal government's approach to crime, with the Conservatives creating 60 mandatory minimum prison terms for drugs, guns, sex offences and other crimes, according to the Justice Department.

The ruling applies only in Ontario, although it could be influential if similar challenges occur in other provinces. The Public Prosecution Service of Canada could not be reached for comment on whether the ruling would be appealed.

The ruling follows a Supreme Court of Canada decision in April throwing out a three-year minimum prison term for illegal gun possession. Ontario Superior Court Justice Bruce Durno's reasoning was largely the same as the Supreme Court's: People who have licences to do something legally, such as growing medical marijuana, may be caught up by minimum sentences, even if they just made a mistake and grew more than they are allowed.

That does not make them criminals, according to Justice Durno. The Supreme Court said the same thing about licensed gun owners who make a mistake about the terms of their licence – storing a gun at their cottage when it is allowed only at their home, for instance.

Justice Durno's reasoning was based on the controversial foundation of the "reasonable hypothetical" – not the case of the man accused in court but a made-up case that might happen. (The Supreme Court has said it is the nature of the law that is at issue, not simply whether it fits the individual who is on trial.) Not even the man's defence lawyer, John Norris of Toronto, was able to cite a single case where a medical licensee had been charged with this crime.

But Justice Durno said that, by chance, he was sitting at another courthouse where a man with a medical licence to grow 122 plants was facing charges but because he had produced 265 plantswas facing charges. Even without that case, though, he said it was not too far-fetched to imagine someone mistakenly growing more than permitted.

"The deprivation of liberty occasioned by a six-month jail term would be grossly disproportionate for a law-abiding citizen who made an honest mistake," Justice Durno wrote in his 97-page ruling issued Friday, noting that the sentence can't be served on weekends or in the community, and can result in the loss of a job or educational opportunity, and family disruption.

Meara Conway, a lawyer who also represented Mr. Vu, applauded the ruling. "Parliament is attempting to micromanage the sentencing process and wrest control from trial judges," she said.

Last October, a B.C. provincial court judge refused to apply the minimum and gave an ill man who grew 414 plants in his home an absolute discharge, but that judge did not strike down the law.

Justice Durno also found to be unconstitutional mandatory extra time where the marijuana production endangered public safety (by creating the risk of an explosion, for example). He struck it down, he said, because prosecutors were not required to show that a convicted person knew of the danger – a so-called gardener who tended to the plants without knowing anything more about the operation automatically faced this additional minimum.

In Duc Vu's case, police with a search warrant found him hiding inside a clothes dryer. There were 1,020 marijuana plants, 12 oscillating fans, 42 shrouds and lights, and a hydro bypass so the house could steal large amounts of electrical power. He pleaded guilty to production of marijuana and theft of hydro, and Mr. Norris asked that he serve one year in jail, saying he has three young children and a sick wife to support.

Justice Durno said the sentence was not grossly disproportionate for Mr. Vu, who had once received a four-month jail term for the same offence. The mandatory minimum was two years with a third year for endangering public safety. (For between six and 200 plants, the extra minimum was three months.) Through a peculiarity of the ruling, Mr. Vu may yet have to face the mandatory two years. For now, Justice Durno's ruling applies only when 200 or fewer plants are involved.

The judge has asked federal prosecutors and Mr. Norris to return to court in November to discuss whether in striking down the minimums where the possibility of a mistake, rather than criminal intent, seems most likely, he also needs to toss out the rest of the mandatory minimums when more plants are involved.

Health Canada to crack down on marijuana advertising
August 1, 2015 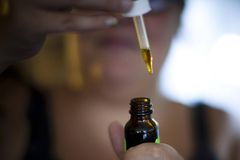 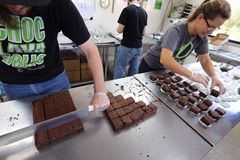