A judge who wore a Donald Trump campaign hat into court on the morning after the past U.S. presidential election will keep his job, but has been suspended for 30 days without pay and reprimanded for a breach of judicial conduct.

Ontario Court Justice Bernd Zabel, who has spent 27 years on the bench, faced the possibility of a recommendation for removal. Eighty-one individuals and organizations had filed formal complaints about his behaviour to the Ontario Judicial Council (OJC), a disciplinary body. Complaints came from groups representing black, female, South Asian and Muslim lawyers saying that Donald Trump was racist and misogynistic and that members of minorities would fear they would not be treated fairly in front of a judge who supports Mr. Trump.

But the four members of the panel that heard the complaints against the judge at a public session last month said his long record of excellent service shows that he deserves another chance – in spite of what they described as serious misconduct.

"The reader of the headline – Judge wears MAKE AMERICA GREAT AGAIN hat into court – would be very concerned about the capacity of that judge to carry out his judicial duties in an acceptable manner," the panel, made up of two judges, a lawyer and a member of the public, said in their decision, released on Tuesday. "But the reader of the whole story of the judge's exemplary 27-year career, his sensitivity to matters such as race and gender, and the absence of any indication of prejudice or bias, might well see things differently."

Justice Zabel declined, through one of the lawyers who represented him at the judicial council, to comment.

"Justice Zabel is anxious to return to work," Giulia Gambacorta said in an e-mail to The Globe and Mail. "We feel the decision speaks for itself."

Daniel Brown, Toronto director of the Criminal Lawyers' Association, one of the groups that filed a complaint, said he supported the council's ruling.

"Justice Zabel admitted that his decision to mix politics with the independent role of the judiciary was wrong and expressed significant remorse for his actions. Even judges are capable of making mistakes. The sanctions imposed by the judicial council reflect both the seriousness of his misconduct and an appreciation of the many contributions Justice Zabel has made to the legal community."

Kim Stanton, legal director of the Women's Legal Education and Action Fund, another of the complainants, said her group welcomes the judicial council's ruling, "as it shows judicial accountability and independence must be taken seriously.

The OJC noted that Justice Zabel's actions had seriously affected public confidence in the judiciary and the disposition of reprimand and suspension is appropriate."

Justice Zabel entered the courtroom in Hamilton on Nov. 9 wearing the hat for a short time, then put it on the bench in front of him. After The Globe reported that he had done so, a flurry of complaints and media attention followed and, on his next day in court, Nov. 15, he apologized publicly, explaining that he had been joking and was not expressing support for Mr. Trump.

The hearing panel said his apology did not go far enough.

"He should have explicitly apologized for attributing political views to his colleagues," they said.

They also said it was a tough call to figure out the appropriate punishment – one that would restore the confidence in the justice system he had diminished.

In the end, they concluded that the act inexplicably was out of character, echoing his own comment at the hearing that "the man depicted in those complaints is not me."

"It is difficult to imagine how or why a judge of Justice Zabel's experience and record of service conducted himself as he did and there appears to be no risk that he would ever be motivated by any of the political views that he appeared to endorse," the panel said.

Also, it said, he recognizes his conduct was unacceptable, and has tried to change by taking one-on-one training from Justice James Turnbull of the Ontario Superior Court. And they cited support from other judges, a defence lawyer who was in his courtroom while he wore the hat and the local criminal lawyers group.

The public hearing prompted an outpouring of support letters from more than a dozen judges, including Superior Court Justice Alan Whitten, who referred to Mr. Trump as "an odious buffoon" and said that, "realizing we are imperfect like everyone else is key to our being gracious and understanding." 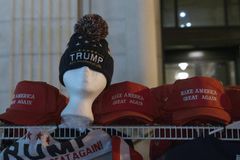