More than 50,000 people could lose their jobs if the Ontario government goes ahead with its plan to raise the minimum wage to $15 an hour by 2019, the province's financial watchdog said Tuesday in a report that assessed the economic impact of the proposed increase.

The job losses would be concentrated among teens and young adults, while the number of minimum wage workers in Ontario would increase from just over 500,000 to 1.6 million in 2019, the Financial Accountability Office said in its report. FAO chief economist David West said the province is entering "uncharted waters" with the increase because no other jurisdiction has gone so far so quickly.

While the move will have a positive impact on the province's total labour market income – hiking it by 1.3 per cent – it will also result in job losses over a number of years.

"There's evidence to suggest these job losses could be larger given the magnitude and rapid pace of this increase," West said.

West said that while the FAO report makes no recommendations about the proposed policy, it does raise red flags for legislators. The report specifically cites the speed with which Ontario will phase in the change as a concern for business, he said.

"It would be wrong to suggest that there won't be some employment impact," he said. "Some businesses will certainly struggle to accommodate these higher payroll costs and will of course look at options for automation, and will look at hiring higher paid, higher productivity workers perhaps. But one way or the other, they're going to have to adjust."

Labour Minister Kevin Flynn said Tuesday that because of the province's strong economy the government can move forward with the minimum wage increase. He pointed to studies written in recent years by the Organisation for Economic Co-operation and Development, the Center for Economic and Policy Research and the Canadian Centre for Policy Alternatives that support the move.

Asked how businesses could prepare, Flynn suggested they will have to find ways to absorb the increase.

"Well, I think they could look at pricing, obviously that's one thing that obviously any business would do," he said.

Progressive Conservative Leader Patrick Brown said those comments can only mean one thing; the government expects businesses will pass on the wage increase to consumers.

"It just shows how out of touch this government is," Brown said. "They think you can just raise the prices on everything. Families are struggling right now to afford their hydro bills."

Brown said he supports the minimum wage increase but would like to see it phased in over a longer period of time.

NDP leader Andrea Horwath said the Liberal government rushed its plan without helping prepare small business. If it had started this transition years ago it could have mitigated the impact, she said.

"That's what happens when the Liberals do things for political purposes ... and (are) trying to get a bump in the polls," she said.

Groups representing both small and large businesses across Ontario have warned that the minimum wage increase would lead to layoffs. Karl Baldauf, spokesperson for the Keep Ontario Working Coalition, said that group conducted its own economic analysis of the minimum wage increase which concluded over 185,000 jobs could be impacted by the hike. The FAO report illustrates why the government should proceed with caution, he said.

"(The government) needs to conduct an independent economic analysis and they need to adjust their plan depending upon what that analysis proves to them," Baldauf said. 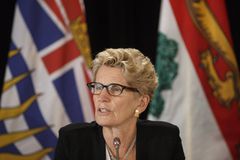 Ontario seeks public input on $15 minimum wage
July 10, 2017
Follow Justin Giovannetti on Twitter @justincgio
Report an error Editorial code of conduct
Due to technical reasons, we have temporarily removed commenting from our articles. We hope to have this fixed soon. Thank you for your patience. If you are looking to give feedback on our new site, please send it along to feedback@globeandmail.com. If you want to write a letter to the editor, please forward to letters@globeandmail.com.
Comments